Aaron Shust ~ Love Made A Way 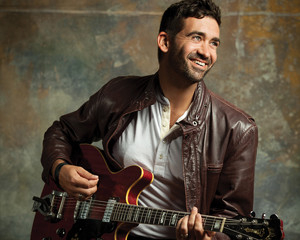 In 2007, the Gospel Music Association named Aaron Shust its New Artist of the Year and Songwriter of the Year. That same year, Aaron’s song My Savior My God was recognized as Song of the Year. Since then, Aaron has become one of Christian music’s most respected voices.

His new album, Love Made A Way — also his first live project — was produced by veteran producer Nathan Nockels (Matt Redmond and Chris Tomlin). The eleven-track recording, released March 10, features both familiar hits, including My Savior My God, and new material, including Aaron’s first radio single, You Redeem, co-written with Matt Hammitt. Hammitt and several others contribute guest vocals to the project.

Aaron, a Pennsylvania native, and his wife and their three sons reside in the small town of Aliquippa, Pennsylvania.

It was around that time I realized I much prefer playing songs that allow people to sing directly to God, and not just sing songs about God. Like David in Psalm 45:1, I prefer to address my verses to the King.

As a believer in Jesus as Lord, I’ve become more confident in His power and His love. More confident as an heir to the Kingdom of Heaven. I’ve witnessed supernatural healing and felt His evidenced love. That has caused me to grovel less in my prayers and in my songs, but I proclaim His greatness more, I glory in the cross more, I’m even more grateful for His grace and mercy. 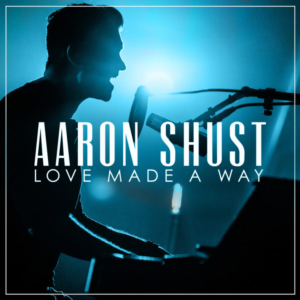 Let’s talk about your new LIVE album, Love Made A Way (Centricity, March 2017). How did the idea of a live project come about? How many songs did you write for it?

I’ve always believed a live album was on the horizon, but it took friends to coerce me into considering it and Centricity to say, “It’s time!”

It’s given me a chance to record pre-existing songs in the manner we play them live, and to capture the energy of a crowd. It was nerve wracking but I’m glad we did it! I wrote fifteen new songs knowing that we’d only record three or four. I believe a lot of good songs were on the chopping block. Sometimes those songs are only meant to be heard by God. That puts a new spin on the term ‘sacrifice of praise’ for me.

What brought about your collaborations with Christy Nockels, Molly Reed, and others? Do any of them perform with you on tour?

Relationship, friendship, availability, sometimes all of the above. I’ve always enjoyed having a female sing along, especially when leading worship. Women bring a sensitivity that simply doesn’t exist with a stage full of dudes.

Throughout 2014, when Lauren Daigle was introduced on her first non-Christmas tour, instead of giving her ten minutes at the beginning I wanted her on stage with us near the end. My band played on her two songs, then she worshiped with us to close out the evening. It was incredible. I wanted that same feel throughout this album.

The only exception is Matt Hammitt (a dude) who sang on two songs that we co-wrote together. It was great sharing this stage with him on those songs.

What three elements most define you as a songwriter and/or a performer?

Being that I have zero sense of style, unless jeans and blue t-shirts count, I’d better keep what sense of humor I have.

Thank you, Aaron! It’s nice to have you back at Divine Detour.

Thanks for having me!!!

To purchase Love Made A Way, log on to: