All Things In Between 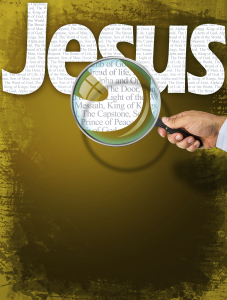 The name JESUS observed with a magnifying glass shows the synonyms: Messiah, Bread of life, Lamb of God; Light of the World; King of Kings, The Capstone, The Door, Alpha and Omega, Prince of Peace

Our Christmas celebrations are just about over. Yet the birth of the Christ Child, which we have been celebrating, is the beginning. 2015 is coming to an end. And a new year lies ahead.

In many ways our lives are a series of beginnings and endings. Children are born but eventually leave the nest. Employment gives way to layoffs or retirement. Good health gives way to sickness. Things begin only to end. Like the ebb and flow of the tide.

Jesus described Himself as the Alpha and Omega. The first and last letters of the Greek alphabet. Notice He didn’t say He was an Alpha or an Omega. He didn’t say he was a beginning or an end. He is THE Alpha and THE Omega. THE beginning and THE end. THE. ONLY. ONE.

So as 2015 ends, Christ is there. As 2016 begins, He is there. And thus it continues through all our years. Until that glorious day arrives when He will bring an end to life here on earth as we know it and eternal life with Him begins. A life that will never end.

May 2016 be a year of embracing beginnings, endings, and all things in between for His glory, honor, and praise.