When not writing, Ginny is coaching writers, critiquing manuscripts, and making vintage-style jewelry for her Esty shop, Storied Jewelry. She is also a mom to adult sons.

Ginny lives in northern California with her Pomeranian, Bear.

When you visited last, you mentioned that it took you ‘a dozen years’ to get published. What kept you going through that season of waiting?

Faith and stubbornness kept me going. I believed God had whispered a portion of His plan to me as I began my writing journey and I clung to that promise. When doubt set in, and it did many times, I’d go back to that promise and the many times I’d felt His affirmation of that promise, and I’d chose to believe He was working, even when all evidence pointed to the opposite.

Plus, I wanted to write — that’s where the stubbornness came in. Whether I was ever published or not, I couldn’t give up writing.

Have you had any writing heroes and/or mentors along the way?

Most of my mentors were the writers whose work I admired and enjoyed. Sue Monk Kidd, Jodi Picoult, and Bret Lott are the novelists whose work I read the most and the work I learned from. My friend, Karen Ball, also encouraged me through the years and ended up becoming my editor. She has edited all four of my novels. And my agent, Steve Laube, has mentored me in many ways — I’ve asked him a million questions, it seems, and he’s always answered patiently and guided me as I’ve made career choices. 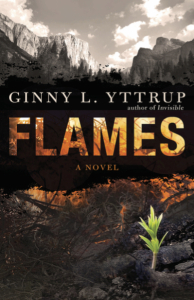 Let’s talk about Flames (Shelterwood Press, September 2015). This book is a bit of a detour for you. Please tell us about it.

Definitely. Flames is my own Divine Detour. And a detour is most often an unfamiliar route, one dependent upon faith rather than sight…

Flames is my first novel written for a general market audience rather than a specifically Christian audience. Making that shift, especially with a book dealing with the heartbreaking issue of adultery, seemed not only crazy, but impossible. How could I write about a woman facing her husband’s betrayal without also showing her dependence on God?

Yet, I felt God had made His direction clear — write it for a general audience. Then I recalled Jesus’s parables and the way He often pointed to creation —elements from the natural world — to convey deep truth. I realized I could do the same with Flames. Using the setting, one of God’s most spectacular creations — Yosemite National Park — I was able to point to Him and His truth throughout the story.

Is there a faith element in this book?

Absolutely. The themes of Flames are forgiveness, love, and new life — all themes that come straight from the heart of God.

Romans 8:28 is the foundation of my belief system. God causes ALL things to work together for good for those who love Him and are called according to His purpose. All things includes even our sin and the sins of others committed against us. Over and over I’ve seen the truth of that promise fulfilled in the circumstances of my life. Through Christ’s death and resurrection, all things are redeemed for those who believe.

If you had to describe yourself with one word, what would it be?

You have another creative passion. Please tell us a little about Storied Jewelry.

Storied Jewelry is the name of my Etsy shop where I sell jewelry and accessories I make from vintage typewriter keys and vintage flatware. What began as a hobby, became a business. When I’ve spent hours upon hours dealing with words — writing, critiquing others writing, coaching writers — I need to do something that stills my mind. Making jewelry does just that. It feeds my need to create, but without words. I thoroughly enjoy creating items that appeal to both readers and writers. I also work with other authors to create products that complement books they’ve written. And Etsy is a wonderful platform for artists and creative! If you’ve never visited Etsy, I encourage you to sign-on and spend some time looking around.

Thanks, Ginny! It’s nice to have you back at DivineDetour.