God Put the Rainbow There 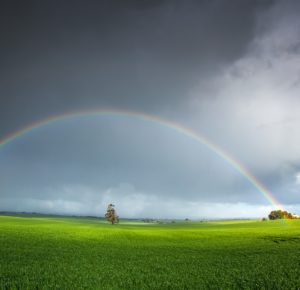 … the earth was dried. Then God spoke to Noah, saying, Go out of the ark, you and your wife, and your sons and your sons’ wives with you. Bring out with you every living thing of all flesh that is with you. … So Noah went out [with his family] …. and built an altar to the Lord, and took of every clean animal and of every clean bird, and offered burnt offerings on the altar.

… Then the Lord said in His heart, “I will never again curse the ground, for man’s sake … not will I again destroy every living thing as I have done. While the earth remains, seedtime and harvest, and cold and heat, and winter and summer, and day and night shall not cease.”

Then God spoke to Noah …. Thus I establish My covenant with you …never again shall there be a flood to destroy the earth. … I set My rainbow in the cloud and it shall be for the sign of the covenant between Me and the earth. … When I bring a cloud over the earth, the rainbow shall be seen in the cloud; and I will remember ….. Genesis 8:14 – 9:17 NKJV

I jumped as my cell phone “rang.” Who could be calling this early? Turns out it was a friend who wanted me to see the rainbow in the sky. I ran outside and found this beautiful rainbow gracing the sky and the clouds. I felt God had put that rainbow there just for me. Its beauty stayed with me all day as I thought about Noah and his ark.

Noah and his family lived at a time when the people of God were evil and no longer worshiped Him. Noah was the only living person on earth at that time who walked in close relationship with the Lord. When God told Noah to build an ark, the people laughed at him, ridiculed him and his family. “Why are you building a big boat? There’s not enough water for it to float on around here!” The people were blind to the fact that God’s judgment was on its way. Not so Noah. God told him to build an ark and he did.

When the time came for Noah and his ark to set sail, his family and all the animal life that were going with him boarded the ark. God shut the door, providing them shelter from the storms that would soon rage.

Rain started pouring down from the skies with the rolling thunder and the brilliant lightning. The earth cracked open and water and fire poured out. Mountains crumbled and valleys closed over. Those left behind had no place to go. But Noah and his family were safe, floating on the desolate waters that had buried the earth.

Life as Noah and his family knew it did not exist any more. Can you imagine how they must have felt the first time they stepped off the ark? The ark that kept them safe while all else was destroyed by the flood? The first thing Noah did once he was on dry land was was build an altar. Then he sacrificed the animals God had identified for this — one of every seven animals — a real act of thanksgiving and faith on his part. Then God spoke to Noah as He made a covenant with Noah’s family and all those who would follow.

God promised that never again would a flood cause such destruction. As long as the earth remained, the seasons of the year would always come as expected. And a rainbow would shine when it rains as a sign to all people that God will keep His promises. Not only to Noah but to all God’s children.

Similarly when God sends clouds over the earth and thunder into our lives, we can be assured that He is there. The thicker the clouds, the brighter the rainbow inside those clouds. A rainbow that reminds us of God’s promise. A promise that one day, instead of being saved by an ark, God will provide salvation through His only Son. The Great Salvation that no flood can ever destroy.