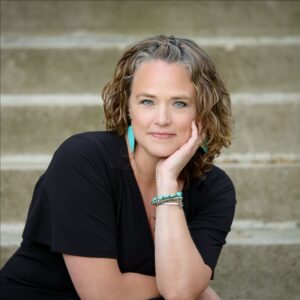 Janyre Tromp (pronounced Jan-ear) is an historical suspense novelist, who is no stranger to detours. She loves spinning tales that, at their core, hunt for beauty, even when it isn’t pretty. She’s the author of Shadows in the Mind’s Eye and coauthor of It’s a Wonderful Christmas.

A firm believer in the power of an entertaining story, Janyre is also a book editor and published children’s book author. She lives in Grand Rapids, Michigan with her husband, two kids, two crazy cats, and a slightly eccentric Shetland Sheepdog.

Growing up I loved to read, and I was creative, but I wasn’t one of those kids that always wanted to be a writer. In fact I started college as a Chemistry major. I ended up changing my major to English basically because I hated labs and my mom suggested I do what I loved . . . and I love to read. True story.

Then I took a job in the marketing and publicity department of a publisher and kind of fell into editing. Now I’m a developmental editor for my day job. And one day my boss told me I should try my hand at writing. So I did and quickly published my three kids books. I took a few years’ break from writing after that to raise my kiddos. One night I quipped to my husband that I’d have to write a best-selling book so we could do all the things we wanted to do.

He laughed and said, “If you want to do it, you should.” So I wrote a book that still isn’t published and seven years later, Shadows in the Mind’s Eye is making its way into the world.

Just as all good novels include a plot twist, the Author and Creator of our lives often writes in a twist that ultimately blesses us more than our original plan. Have you ever experienced such a “Divine Detour” in your life?

Oh heavens. Have I ever experienced detours…

There have been long stretches of my life where I was all too familiar with debilitating fear. I still have occasional flashes from my childhood, the rush of adrenaline causing my pulse to pound and hands to shake. I was terrified to have kids, to be the one responsible for their physical/mental/emotional wellbeing. The last thing I wanted was for them to have the same problems I had. But, as one of my characters Dovie May says, “The best place for miracles is where we don’t fully believe, where our believing has run out.”

My husband, Chris, and his family, as well as my good friend, Sarah De Mey, and my mom (who worked hard to get help), have been amazing role models for me as I navigate what it looks like to raise emotionally healthy kids. And we were doing quite well.

Until in about eighteen month’s time, I had a major medical issue requiring surgery, my daughter tore her ACL, my son had recurring pneumonia, my husband had spinal surgery, the docs thought I had lupus, and then to cap it off, my daughter became increasingly ill. After months of visiting doctors to find out why my thirteen-year-old daughter was experiencing increasing abdominal pain, she collapsed at school. What followed was a living nightmare. Doctors found her abdominal cavity full of a fungal infection that quickly went septic. That was the first time we almost lost her. She was hospitalized seven times over a few months’ time and the doctors had no idea what caused her illness.

Months later, she’d lost more than forty pounds, and both she and I were wracked with nightmares, an inability to drive anywhere near the hospital, or be in a room with needles. To this day, I can’t smell rubbing alcohol without my body responding with panic.

On paper she should not have survived, and I can’t describe the immense fear that comes from the Pediatric ICU or a parade of doctors. My girl is doing great now, and she is one of the toughest kids I know. But boy does she have a soft heart for other kids who are suffering, and I can fully understand why someone might struggle with faith in a loving, all-powerful God.

Honestly I don’t think it’s a coincidence that I was a little more than halfway through finishing Shadows in the Mind’s Eye when my girl got sick. I don’t know that I could have done justice to my characters until I’d found the path to hope after my daughter had walked out of the hospital for the last time.

I’m enormously grateful for EMDR, my therapist, and the grace of God that much of my fear is gone. 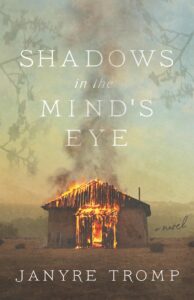 Let’s talk about Shadows in the Mind’s Eye (Kregel Publications, April 2022). Please tell us about it.

A reviewer recently called Shadows in the Mind’s Eye a lyrical suspense, which kind of made me laugh because those two descriptions shouldn’t go together. But that’s actually a really good explanation of my style. It’s kind of Hitchcock mixed with book club fiction (complete with deep topics, beautiful writing, and a bit of romance).

The book is just post WWII about a husband and wife—Charlotte Anne and Sam Mattas. They were kind of that perfect, hardworking couple before Sam left their farm for the war in the Pacific. And all either of them wants is to go back to normal. Sam used to be the protector—secure and stable for Annie, who’d experienced some pretty terrible things. But when Sam arrives home in Spring of 1946, his battle fatigue has everyone questioning his sanity and her safety… especially after he nearly kills his brother, then claims to see men on the mountain where no else has seen them.

Are there really dangerous men on the mountain or is his twisted mind conjuring things that aren’t there?

In the tradition of Hitchcock with a hint of psychological thriller, Shadows in the Mind’s Eye explores the illness we now call PTSD (post traumatic stress disorder) and persistent love in a world determined to destroy it.

What led you to want to write this particular story?

This story actually began while talking to my grandparents over a glass of lemonade. My U.S. History professor had given us an assignment to talk to family about the Depression and/or World War II. Until that point, I’d had no real concept of what the war was like, either for the soldiers or their families back home. I guess I’d thought that the greatest generation slid back into life and easily became the loving people I knew my grandparents were in their 70s. When I discovered that wasn’t the case, I wondered how they had survived the fear and drastic changes.

Even though the book idea started with wondering how my grandparents’ marriage survived the pressure of war, the book isn’t biographical. So, I needed a setting other than my grandparents’ hometown. For the characters that I was building, I needed a small town. When one of my good friends told me she had an entire book of stories from her family in Arkansas, I jumped at the chance to read first-hand history.

Amongst the Hughes family stories, I acquired the basis for Dovie May and Hot Springs, Arkansas—home to the largest illegal gambling racket in the country.

Well, I don’t have to tell you that mobsters and illegal activity are an excellent backdrop for a story with a bit of suspense. The book The Bookmaker’s Daughter by Shirley Abbott confirmed that Hot Springs mobsters operated with full permission of the authorities. In Shirley’s stories, I also discovered the foundation for Charlotte Anne’s father. All of which gave me a location and a cast of characters that could stoke Sam’s fears and make everyone (including the reader) wonder whether or not he was crazy.

My family loves Thai food. So that means there’s no complaining (a definite bonus when you have kids). But in general, there’s something for everyone and it can be spicy or tame depending on your preference. And there’s something fresh about the way my local place makes it.

I’ve always had an affinity for Jeremiah. I wish I didn’t. He’s known as the weeping prophet. But there’s something so powerful about his doggedly searching for the truth regardless of what it costs. It encourages me in my journey to find truth and speak it.

I think I’m all of the above at different times. Because of my creative side, I tend to be a little bit of a chameleon—not in an “I’m trying to hide my true self” kind of way. More of a recognition that sometimes I need to kick tail and sometimes I need to take a back seat, acknowledge that I don’t know everything, and listen so I can learn. Usually this happens when my kids are studying algebra or precalculus. They are now officially smarter than me.

Seriously though, my kids will tell you that I’m pretty chill unless someone threatens them. Then I definitely slip into Terminator mode. But mostly I’m chill.

I have an entire menagerie of pets. I ADORE critters of all kinds. Right now we have a Shetland Sheepdog, Odie, who was a rescue. He was two when we got him and was afraid of grass. Poor puppers hadn’t been outside much and still has some eccentricities from his probable abuse.

We have a bunch of saltwater fish in the basement right next to my desk. Those are mostly my husband’s. But I get the beautiful reef view.

Then we have two Balinese cats—Brave and Hope. These two adorable troublemakers came to us during my daughter’s illness. Both my kids are allergic to cats, but my daughter needed something to get her through a particularly awful medical test prep. She’d always wanted a cat. And Balinese cats are hypoallergenic.

They’re also typically hard to find with a huge waiting list. But we were able to pick them up on the way home from the hospital. My daughter named one Brave and my son named the other Hope. I’d say those are pretty appropriate names. Yes?

Thanks, Janyre! It’s nice to have you as a guest at Divine Detour.

To order Shadows in the Mind’s Eye, log on to: