Jason B. Ladd ~ One of the Few: A Marine Fighter Pilot’s Reconnaissance of the Christian Worldview 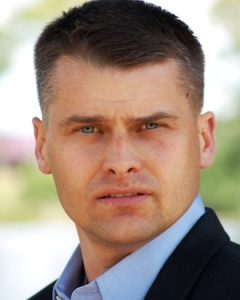 Jason B. Ladd is an author, US Marine, and Iraq War veteran. One of the Few is his debut book.

He has flown as an instructor pilot in both the F/A-18 and F-16 fighter jets and in the book he draws from his Christian worldview, as well as his military experience — using fighter pilot fundamentals — to speak to “the greatest mission of all: the pursuit of truth.”

He and his wife, Karry, are the parents of five children.

What set you on your writing and speaking path?

I didn’t become a writer until I had something worth writing about. Prior to becoming a Christian, I had already done some pretty exciting things, but ultimately, they could all end in “so what?” And without a recognized worldview, I was having a hard time understanding the world. Writing anything during that time would have hurt more than it would have helped. Embracing a Christian worldview helped open my eyes to the rest of the world around me. It made me think more about others and things in the future — ultimate things — and that gave much greater significance to the present.

The book began as a “writing project” for my children to one day teach them why I became, and remain, a Christian. But as soon as I began writing, I realized that the story might be able to help others as well. That’s when I stopped writing for myself and started writing for the reader.

The speaking is new, but I’ve found myself on a stage more than a few times during my life. I can just wing it, right?

The Author and Creator of our lives often writes in a twist that ultimately blesses us more than our original plan. Have you ever experienced such a “Divine Detour” in your life?

We’ve been on a Detour since this past April. Our son, Boone, died the day he was born. He had a chromosomal condition called Trisomy 18. He was born early and was only with us a very short time. Losing Boone was not part of our plan, and it’s hard to see it as a blessing. But we have hope. The author declares in The Book of Job, “Though he slay me, yet will I trust Him” (Job 13:15). God is the master of taking the greatest tragedies and turning them into the greatest victories. We don’t feel victorious. But we do have reason to celebrate, because if there is anyone who can bless us through difficult times, it is our God. 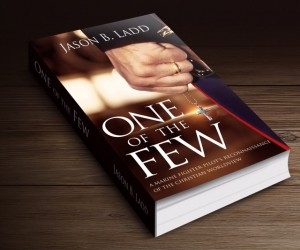 Let’s talk about One of the Few: A Marine Fighter Pilot’s Reconnaissance of the Christian Worldview (Ladd Publications, September 2015). Please tell us about it.

But it’s told from a unique perspective, that of a Marine with a profession that people can’t help but get excited about. I was becoming a Christian the same (time) I was becoming a fighter pilot, and that made for some interesting times.

There are many useful analogies that can be made using the Marines and Christians. Both promise a life of pain and suffering. But both offer far greater rewards in the end. I also wanted to share my love for apologetics in a way that you wouldn’t normally hear from a pastor, professor, or theologian.

Ultimately, the book is about understanding the importance of asking big questions, the consequences of spiritual apathy, and the impact of living a life consistent with a worldview based on truth.

What message do you most want to pass along to others through the book (and in your speaking)?

Your life matters, and beliefs have consequences. But the only reason your life matters (and could possibly matter) is because you are a wanted being created from, sustained by, and promised to forever have the love of a magnificent God.

The big questions in life are for more than the ancient philosophers and the high school debate team. They are for you. Because beliefs drive behavior. What you believe (or don’t believe) affects your family, your friends — the world! And time spent working this out is time well spent.

God often uses our work to teach us something. What did you learn (about life, faith, and/or even yourself) in the process of writing this book?

I learned that when you find your passion, you find your purpose. Before becoming a Christian, I didn’t read much, and I certainly didn’t write. When you discover significant truths about the world, it’s hard not to want to share them with the world.

I learned that you can become whatever you want to become. The book project sat for about a year, and I had my doubts that I would even complete it. But then I realized that the purpose of writing it was not for the book to succeed. The purpose of the book was to make me a writer. Mission accomplished.

Describe yourself with one word.

“Weird.” Okay, that’s from my wife. But we’ve only been married fourteen years, so we’re still in that “honeymoon” phase. It will be a while before she starts really getting to know me. I’ll go with “humble.” No, that’s self-defeating. Next question!

When were first married, we had a sheltie. He was great dog. He would round up our cats and learn tricks. He wasn’t our first dog, though. We brought home a dog from the SPCA — I think some kind of hound dog — and he wailed all night. We took him back the next day. My wife is not afraid to return things. Adding a dog to the list was awkward. Sometimes I worry about our children…

Thank you for your service to our country, Jason. And thank you for taking time to visit DivineDetour.

To purchase One of the Few: A Marine Fighter Pilot’s Reconnaissance of the Christian Worldview, log on to:

You can download the Kindle version of the book FREE November 10-12.