Jewly Hight: Right by Her Roots

Jewly Hight has written about popular music for more than a dozen outlets—including Nashville Public Radio, American Songwriter, Relix, No Depression, Paste, and the Nashville Scene—and holds a master’s degree from Vanderbilt Divinity School. Her first book, Right by Her Roots: Americana Women and Their Songs (Baylor University Press, March 1, 2011), explores the relationship between artist roots and artistic expression.

Born in North Carolina and raised in Florida, Jewly now makes her home in Nashville with her husband and an energetic dog named Grady. 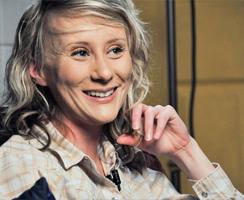 Let’s talk about Right by Her Roots: Americana Women and Their Songs (Baylor University Press, March 2011). Please tell us about the book.

Each of the eight chapters has a different songwriter as its subject; there’s Lucinda Williams, Julie Miller, Victoria Williams (no relation to Lucinda), Michelle Shocked, Mary Gauthier, Ruthie Foster, Elizabeth Cook and Abigail Washburn. I examine their musical and spiritual impulses, what their songs and career choices say about how they view the world, how the stories of their roots relate to what they’re doing and where they fit into—or stick out from—the cultural landscape. I did a few years’ worth of in-depth interviews with all of them, so I included a good amount of the perspectives they shared with me, in their own words.

What is Americana music?

Americana music is contemporary American roots music. Or, to put it another way, Americana is a descriptor applied to a wide range of styles that draw on older sensibilities in the creation of new ones. Remember the decidedly old-timey O Brother, Where Art Thou soundtrack? That’s Americana. So, it could be argued, are a lot of the raw, bluesy projects that Jack White takes on. Or the southern soul and Gospel albums Mavis Staples is making with younger producers. Or literary singer-songwriters with country and folk leanings. And so on… Taken at its broadest, it’s a big category.

How did you go about selecting the eight women you profiled?

The eight female singer-songwriters I chose have all released enough music by now to give us a sense of their evolving artistic voices, and the voices we hear are unmistakably theirs—they don’t sound like anybody else. They’ve each, in their own way, made an impact in the Americana world, and sometimes beyond it. There’s depth to their music and their stories, and, to me, they are all worthy of serious attention, even—and especially—if they haven’t always been given it in the past. Some people had underestimated Elizabeth Cook (chapter seven) because she happens to be blond and have a southern accent, or pegged Julie Miller (chapter two) as innocent and inexperienced because her voice has girlish qualities. And there was also this all-important consideration:  Were they willing to spend hours upon hours talking with me, answering questions that required a lot of thought on their parts? Those I wrote about were up for it, and I don’t take that for granted. 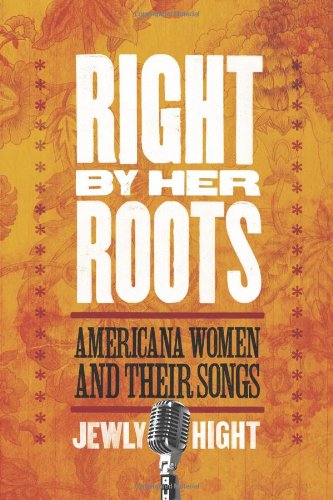 In Right by Her Roots, you delve into each performer’s back story with the conjecture that a performer’s roots help determine their artistic expression. Can you elaborate?

I think it can help us to understand, appreciate and connect on a deeper level with the music performers make, if we get a sense not only of where they come from—and by that I mean literally where they grew up, what their family life was like, what they were immersed in culturally, musically and religiously—but how their relationship to where they come from has changed. Maybe they’ve stuck close, maybe they’ve ranged far; maybe they’ve held on to certain aspects of their roots but let go of others; maybe they’re creatively reinterpreting, or coming to terms with, their back story. In big ways and small, all of that is shaping their music, from the styles they incorporate to the ways they sing, the musicians they collaborate with and the themes they take up.

You hold a masters degree from the Vanderbilt University Divinity School. How does your faith play into your writing?

I think it matters a great deal to the book that I look at individual people as sources of spiritual insight informed by their identities and experiences; that suggests they have something to say that’s at least worth hearing. When it comes to listening to music, I pay particular attention to the spirituality woven into artistic expression.

Although I’d been published a few times as a journalist, it wasn’t until I was laid-off from a music industry job several years ago that I started pursuing writing full-time. It didn’t seem like such a pleasant or promising development at the time, but if my life hadn’t taken that turn there are a lot of worthwhile writing projects I’d never have tackled, including this book.

Each of the women profiled in your book took a different path to their career in music. What advice would you offer to young women who aspire to a career in music?

I don’t think there’s any one way to go about it, least of all now, when so much is shifting in the music business. On the artistic side of things, I think it’s important to hone your voice, to know what drives you and what it is that you bring to the table and to discover who your music connects with. Business-wise, it can really help to build a good team around you and to plug into a likeminded musical community.

Broccoli—I’m a vegetarian who does, in fact, love vegetables. And broccoli’s one that you can find virtually anywhere you go, even a steakhouse or a barbeque joint. Or, in case broccoli doesn’t count as comfort food, I do enjoy the occasional Moon Pie. They make me think of the R.C. Cola and Moon Pie Festival in Bell Buckle, Tennessee, which is great fun. And no matter what anybody says, they’re cheap and not half bad.

Yes, I’m a lifelong lover of music, and sometime maker of it. I have a background as a drummer and I’ve done some singing and songwriting, too—in addition to clogging. I consider clogging a form of percussion. I suspect that knowing what it’s like to write a song, record it and perform it live has sometimes given me insight into what to ask and how to ask it in interviews.

A cathartic blues number laced with earthy humor and anchored by a fat backbeat. That’s probably the drummer in me speaking.

I’m going to say neither and go with a key change instead.

A personality test I took last year indicated that my personality type is driven to try to be the heroine, and that seems about right. But there may also be some mysterious woman thrown in there, too.

My husband and I have a beloved jack-chi named Grady. He’s named both for the country guitarist Grady Martin and the “Sanford and Sons” character Grady Wilson. He likes to curl up in my lap while I’m writing, but he’s also been known to run with me for multiple miles. We find it amusing that he holds his rawhide chews in the side of his mouth, like he’s a tough guy smoking a cigar.

Thank you, Jewly! It’s great to have you as a guest at DivineDetour!

For more information about Jewly and her book, visit:

To purchase Right by Her Roots, logon to: