Joan Wolf ~ A Reluctant Queen: The Love Story of Esther

After releasing more than forty books in the ABA market, Joan Wolf recently debuted her first Christian novel. A Reluctant Queen: The Love Story of Esther (Thomas Nelson, June 2011) is based on the Old Testament story of the little Jewish girl who fell in love with, and married, the Great King of Persia.

Joan’s personal story is nearly as intriguing. She wrote her first book in longhand at her kitchen table, while at home with her first child. After selling that manuscript, she went on to become an acclaimed, bestselling author of Regency romance and other historical fiction.

She grew up in Bronx, New York, is an avid rider and horse owner, and is an all-around animal lover. She and her husband Joe live in Connecticut. They have two grown children.

What sparked your new writing journey?

I had written romance and historical novels for the ABA for many years, but my decision to write for a Christian publisher came about quite recently. All my life I suffered from migraines and chronic daily headaches. I had a good specialist and I managed to function by taking a very wide variety of medication. Then the medication stopped working and the headaches became constant and unbearable. It was then that my life swung back to Jesus. There simply was nowhere else to go. I asked Him to help me, and He did. Technically, the credit for my cure goes to a completely different kind of therapy, but I know that finding the therapy and then working at it for months and months with no results until, finally, I woke up one day without a headache—well, that was a miracle.

When my husband retired we decided that we would take over the church food pantry. It was a relatively simple job—four times a year we collected and gave out food to some twenty-eight families. Five years later, we have eighty-five families and are open twice a week all year around to distribute food to our clients. We have also paid people’s rents, their utility bills, their deposits for an apartment, and we have put the homeless up in local motels. It’s become a full social services job, but it has been a great blessing to me. Nothing makes you feel better than being able to help people. 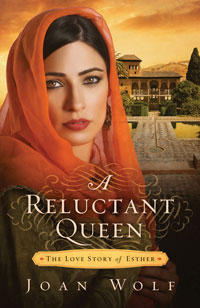 Let’s talk about your new book, A Reluctant Queen: The Love Story of Esther (Thomas Nelson, June 14, 2011). Please tell us about it.

A Reluctant Queen, the love story of Esther, is my first book for the Christian market. It’s a different take on the traditional beloved story—I focus more on the relationship between Esther and Ahasuerus, in which I have always seen the seeds of a great love story.

It seems to be going over very well; the reviews on Amazon are very satisfying. If readers are willing to read something that expands and interprets a Bible story beyond what is written down exactly in scripture, I think they will love A Reluctant Queen.

I think the novel shows how God works His plans through the actions of humans. Esther’s big decision is will she let God work through her? In the end she decides that she will and so provides for all of us an example of how we must listen to God’s voice and open our hearts for Him to use us for His purposes.

What are you working on now?

I’m working on a novel about Rahab, one of those women in the Bible of whom we get a tantalizing glimpse before she is whisked away. This book will tell her story.

Russell Stover chocolate covered nuts. I could eat boxes of them.

Alas, I am not musical at all—totally incapable of even carrying a tune. This does not stop me from singing heartily in church, however. Little kids may look at me in horror, but I say to myself, “God, this is the voice you gave me and you’re just going to have to listen to it.”

In the story of my life I am a wife and mother. I really have no other fantasies.

Please tell us about your pets!

In my life I have had many animals. I’ve owned a beautiful thoroughbred mare (Elsa), a crazy Holsteiner mare (Cachet), and a sane and sensible quarter horse gelding (Pendleton). I have owned four dogs: a fox hound (Regent) who got kicked out of the hunt because he wouldn’t chase foxes. A mixed breed rescue (Lucky) who would have died for me. A greyhound (Betty) who was so elegant and ladylike it was a pleasure just to look at her. And now I have a rescue rat terrier, my darling Penny, who thinks that I should die for her.

Thank you, Joan. It’s a pleasure to have you as a guest at DivineDetour!

For more information about Joan, visit her website at http://www.joanwolf.com/.

To purchase A Reluctant Queen: The Love Story of Esther, logon to: