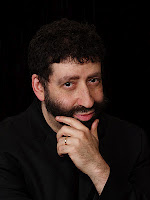 Messianic rabbi Jonathan Cahn’s new book The Harbinger (FrontLine/Charisma House, January 2012) currently sits at the top of ECPA Bestseller list and at #9 on the NY Times Bestseller list. The novel, which is based on Cahn’s extensive research of events related to 9/11, draws its premise from Isaiah 9:10, and reveals an uncanny parallel between the history of ancient Israel and the present days of the United States. The book, part prophecy and part history lesson presented in fiction format, is a call for America’s return to its spiritual heritage.

Cahn is the leader of Beth Israel, based in Wayne, New Jersey and one of the largest Messianic worship centers in the world. His personal faith journey took him from Jewish roots, to atheism, to becoming a spiritual seeker who played in a rock band during his college years. At the age of twenty, he surrendered his life to God’s direction. 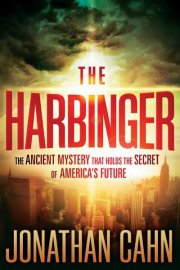 Why did you choose fiction as the vehicle to tell your story?

I originally wrote The Harbinger as pure non-fiction—more as a teaching. But when I was finished, I was led to change the format. The Lord uses metaphors, pictures, images, symbols, stories, narratives to communicate spiritual truth and prophetic revelation. The Harbinger is filled with many deep mysteries, so putting it in the form of a narrative makes it much more accessible, easy to read, for believer or non-believer. Ninety percent of The Harbinger is the revelation of the mysteries, but the revelation is framed and conveyed through the story, through the mouth of “the prophet.” Once I began to write in this way, from the mouth of the prophet, the words just flowed out, as if the book was already written.

Had you ever previously considered writing a novel?

I’ve had in my mind several books along this nature—communicating spiritual truth or prophetic revelation in the form of a narrative—but I never thought of doing this for The Harbinger until I finished the first draft.

What was the first of the harbingers that you discovered and how did that lead to the other eight?

The first harbinger was 9/11 itself. In the wake of the calamity I prayed to the Lord and was led to the Isaiah chapters 9 and 10, which focus on the last days of ancient Israel, with the first sign being the initial attack on the land. A while later, I was standing on the corner of Ground Zero, my attention was drawn to an object, the fallen sycamore. It was the first puzzle piece of a biblical mystery that began unfolding. The more I searched, the deeper and larger the mystery became. First the Harbinger of the Sycamore, then of the Gazit Stone, then of the Erez Tree, the Tower, and finally that of the Vow and the Prophecy.

The book underscores a chilling reality, that the United States is increasingly turning its back on the God of our founders. Yet the task of turning around a nation seems overwhelming. How can individual Christians make a difference?

The Lord gave a word to Solomon that applies:  “If My people who are called by My name will humble themselves and seek My face and pray and turn from their evil ways, then I will hear from heaven, I will forgive their sin, and heal their land.”

We, as God’s people, are called to be the light of the world, the salt of the earth. If America is growing increasingly spiritually darker, it’s our calling to shine all the more brightly. It’s for us to pray, more than we’re praying, to seek His face, more than we’re doing, to put out from our lives anything that has no place, and to live in a manner worthy of the high calling with which we have been called.

When you were a young man, before God placed a detour in your path, had you planned to pursue music as a career?

As a teenager, I had a rock band. Music was one possibility. But the Lord caused me to (be) hit by a locomotive train—literally. After that I decided that I better put my plans away and follow His.

Are you writing a sequel to The Harbinger?

Right now there’s so much happening with the success of The Harbinger that I haven’t had any time. But there are things in my mind and heart concerning the sequel. Before I write more I want to have time to be in the Lord’s presence.

Thank you, Rabbi Cahn. It’s a pleasure to have you as a guest at DivineDetour.

To purchase The Harbinger, logon to: