Award-winning Christian author Laura V. Hilton has released almost a dozen novels. Her catalog includes the Amish of Seymour series, the Amish of Webster County series, and the Amish of Jamesport series. Among her books are Patchwork Dreams, A Harvest of Hearts, Promised to Another, Healing Love, Surrendered Love, and Awakened Love. She is also a professional book reviewer for the Christian market, with over a thousand book reviews published at various online review sites.

A pastor’s wife, stay-at-home mom of five, and home-school teacher, Laura and her family make their home in Horseshoe Bend, Arkansas.

You have had three books release within a few months time this year. Let’s talk first about White Christmas in Webster County (Whitaker House, September 2014). Please tell us about it.

A White Christmas in Webster County. Wanting to relocate from Shipshewana to somewhere new, Mercy Lapp answered an ad in The Budget to work as a mother’s helper for Matthew and Shanna Yoder in Seymour, Missouri. Mercy relocated from Shipshewana to give herself space and time to heal after the death of her beau in a fishing trip on Lake Michigan. Abner Hilty fled Shipshewana to Montana to work on a ranch after he and his twin brother witnessed a murder. Now that the killer is safely behind bars, Abner decides to visit his brother Abram in Missouri where he’d settled with his bride of one month. Mercy is surprised to see Abner there, and equally surprised by how much he’d changed physically since she’d last seen him. Even though the two live in different districts they occasionally see each other in town and form a fledging friendship. As Christmas approaches, an unexpected heavy snow lets Abner and Mercy spend a lot of time together in wintertime fun. Abner hopes to interest Mercy in a more permanent relationship. But then Mercy has a potentially life changing discovery. Will she return to Shipshewana to answer the summons of the past? Or settle in a new place? 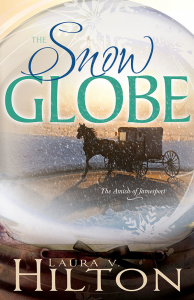 Your second book from Whitaker House—and another Christmas story, The Snow Globe, releases in November. Are the two books related?

No, they aren’t related. The Snow Globe is not actually a Christmas story, though the title makes one think so. It is actually the story of lives being shaken up like a snow globe. This is the blurb.

The Snow Globe. Viktor Petersheim has left the Amish and works on a river boat on the Mississippi River, spending one month on the river then having one month off. During his off-work months he returns home to his Amish community and helps out on his grandparents’ farm. When he returns home after his most recent absence, he discovers his grossmammi has developed health problems and they’ve hired Esther Beachy to be a “mother’s helper.” Viktor is unsettled by this woman living in their home, but has to accept it.

Esther loves listening to Viktor’s grandmother’s stories and while puttering around in a store while the grossmammi’s in the hospital, she discovers a snow globe that depicts an area where the Petersheims used to live. She buys it as a gift for the grossmammi to cheer her up during her hospitalization. Viktor is touched by Esther’s gift and her care for his grossmammi, and strives to be friendlier. Will Esther’s gentle heart draw him back to the community? Or will he return to the river once again? 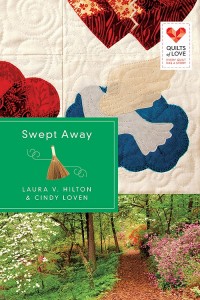 Swept Away (Abingdon Press, November 2014), which is a non-Amish story. What inspired the idea for it?

Quilts of Love (Abingdon Press) put out a call for quilt stories, any genre, and I wanted to write for them. I came up with several ideas, all of which they liked and hung on to, but this particular story was not my idea. A friend of mine came up with Sara Jane & Grandma’s story and told me about the quilt. I wrote the book and came up with Drew’s story. (Her name is listed as “co-author.”)

Swept Away. He survived a life-altering event. She is facing one. Sara Jane Morgan is trying to balance teaching with caring for her grandmother who doesn’t want to be cared for. When school lets out for the summer, the plans are for Grandma to teach Sara Jane to quilt as they finish up the Appalachian Ballad quilt Grandma started as a teenager. But things don’t always go as planned.

Andrew Stevenson is hiding from his past—and his future. He works as a handyman to pay the bills, but also as an artisan, designing homemade brooms. When Sara Jane’s grandmother hires him to renovate her home, sparks fly between him and his new employer’s granddaughter. It doesn’t take Sara Jane long to see Drew isn’t what he seems. Questions arise, and she starts online researching him. What she discovers could change her life—and her heart—forever.

You’re obviously a prolific writer. Has that always been the case? What’s your writing process like?

I’m not as prolific as many authors that come to mind. I write two or three full length books a year. And no, it hasn’t always been the case. Before I was published I was known to go over and over and over the same story for years.

Detours are a part of life—and they sometimes happen during the holidays, when our Thanksgiving or Christmas “traditions” occasionally take a new direction. Have you ever had an unexpected or unusual holiday celebration, and what did you learn from the experience?

One time my mom came to visit my husband and I, and our four month old baby for Christmas. While she was there, Steve’s father called, all upset that Steve was spending Christmas with my family and not with his. (We had agreed on every other holiday, and had spent Thanksgiving with him) He threatened to disown Steve if we didn’t come up for Christmas. We were expecting a bad ice storm, but Steve (twenty-two years old) decided we were going to visit his family so he wouldn’t be disowned. So we went. While there, the ice storm came in. Steve had to work the next day, so we had to drive home over ice-covered Arkansas mountain roads. Mom had stayed at our apartment, so we were welcomed by a warm home, but Steve decided never again. He grew up some there, responsible for a wife and a baby in horrible weather.

I think we both learned that sometimes, you have to say no to someone. Especially if they are making unreasonable demands.

Oh, iced cut-out cookies. Cheesecake. Crab dip and Ritz crackers. White chocolate covered pretzels…. With our wedding anniversary, Christmas, my birthday, and New Years Day within mere days of each other we have plenty of fun foods that have made their way into our family traditions.

So many! It’s Called Christmas. The Hallelujah Chorus, Mary, Did You Know, Angels We Have Heard On High, Joy to World, I’m Dreaming of a White Christmas…. I could go on and on. Christmas is my favorite holiday!

We have a six-foot tall artificial tree, green. Not sure what kind it’s supposed to be. I love real trees, but I’m allergic to the strong pine scent. I also like the tree up from Thanksgiving until mid-January. A real tree wouldn’t survive. We also have a bunch of ornaments, the children’s special ones, antique ones, gifts from friends, so our tree really has no theme. It’s just a fun tree.

Thank you, Laura! It’s a pleasure to have you back at DivineDetour.