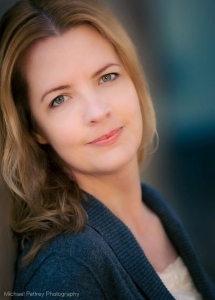 Three time Christy Award winning author Lori Benton was raised east of the Appalachian Mountains, surrounded by three hundred years of history. Her novels (Burning Sky, The Pursuit of Tamsen Littlejohn, and now The Wood’s Edge) transport readers back to the eighteenth century, where she brings to life the Colonial and early Federal periods in our country.

Lori has a ‘huge capacity’ for solitude. Maybe that’s why she fell in love with the Northwest on her first hike up a mountain in Montana. She now enjoys exploring the Oregon wilderness with her husband.

My friend Leah. When we were nine years old she announced she’d written a story. She let me read it. It was a moment of revelation: anyone, whenever they felt like it, could write a story about … absolutely anything. Though I was already an avid reader, my perception of “author” broadened from the narrow notion of entitled and somehow permissioned grown-ups to include a little girl crazy about Native American stories and wild animals. I promptly wrote and illustrated Yellow Feather and the Wild Mustang, and thanks to a grandmother who saved that story (dated 1978) I still have it.

I never lost interest in storytelling from that day and frequently entertained notions of writing a novel during my teen years. Though I wrote stories now and then, writing that novel took a backseat to painting for a few years after high school and art college … until 1991. That’s when I got serious about it.

I have. In March of 1999 I was diagnosed with Hodgkins Lymphoma and went through six months of chemotherapy and radiation. By that autumn I was in remission, my hair was growing back, and I appeared to be a healthy 31-year-old woman walking around. What I really was was a bewildered, frustrated writer with her brain in a fog who was about to give up on ever writing again — at least the kind of novels I’d been writing and still wanted to write. I was experiencing chemo fog, a common side effect of cancer treatment.

God brought me through that valley and five years post chemo, in 2004, I began writing again, with a few extra challenges to face. For one thing I haven’t good long-term memory now. Things I researched five years ago (honestly? a few months ago) are no longer where I put them in my head. I’m constantly reading up on subjects I’ve already researched. What it boils down to is that I have to work harder at the research aspect of historical fiction writing than I probably would have if I’d never had chemotherapy. It’s a blessing wrapped in a challenge. When I become frustrated I think about the fact that I’m writing at all and know it’s not by my strength that these stories are getting written now. It’s God’s (Philippians 4:13). I have to lean on Him daily. I’m thankful, daily, for the strength, time, and mental acuity He’s lent me to get these stories out of my head and onto the screen. I take a lot more things a lot less for granted than I did as a healthy writer in my twenties. 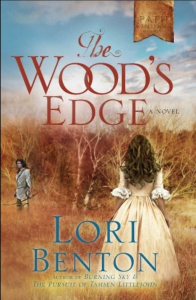 Let’s talk about The Wood’s Edge (Waterbrook Press, April 2015). Please tell us about it.

The Wood’s Edge is the story of two families living in the Mohawk Valley of New York during the years between the French & Indian War and the Revolutionary War (1757—1776). One family is Oneida, one of the Six Nations of the Iroquois Confederacy. The other family, the Aubreys, are British colonials living on a farm not far from Oneida lands.

It’s the story of what happens when a man makes a desperate choice — a kidnapping, actually — affecting both of those families. The novel explores the tragic consequences of sin, as well as God’s faithfulness in redeeming even the worst choice of a man’s life and using it for good. It’s a story about guilt. It’s a story about forgiveness, of God for mankind and for mankind for each other.

And last but not least it’s a love story — on multiple relationship levels: Mother and son. Husband and wife. Father and daughter. Father and son. And there’s romance too. More than one of those.

You’re a member of Transformational Fiction authors. In what way(s) do you want your stories to be “life changing”?

I want my stories to point readers to the source of all comfort, all hope, all peace, and all strength, and that’s Jesus Christ. He’s the only one who can change lives for eternal good, so I hope that as an author I have let as much of His truth shine through the plot and character as I can.

I try not to reward or comfort myself with food. Writing is such a sedentary occupation and keeping in shape can be a challenge. When I started putting on the weight I stopped my bad habit of rewarding myself with whatever I had most recently baked at the end of my writing day. But there’s your answer. I’m weak when it comes to homemade baked goods and am always on my guard now.

I re-listen to one of my favorite books every year. It’s To Say Nothing of the Dog, or How We Found the Bishop’s Bird Stump at Last, by Connie Willis, narrated with impeccable comedic timing by Steven Crossley. What can I say about this book? It’s Jane Austen meets PG Wodehouse meets your favorite mystery novel. Throw in time travel, the near future, the Victorian Era, cats and dogs, the Middle Ages, Coventry Cathedral, WWII, time lag, slippage, a boat trip on the Thames, a butler to rival Jeeves, an absent-minded professor, romance, jumble sales, comedy of errors, and the great debate over whether blind forces or individual character is the stuff of which history is made. Oh, just check it out.

This website features musicians as well as writers. If you were a song, what kind of song would you be?

Something Celtic, with a bodhran thumping and pipes wailing and probably some lyrics sung in Gaelic.

I am so utterly ordinary. Girl next door.

I have a dog, Dargo. He’s a good trail dog — SQUIRREL — and keeps me company during the day while I write. He loves his walks and has quite the vocabulary of yodels and barks and whines (think Chewbacca) but he only talks in the morning first thing. He’ll stand up on his hind legs and balance there if he’s trying to see something in the distance. He loves steamed broccoli and will steal anyone’s beef jerky, anytime, anywhere. He’s a great guy.

Thank you, Lori! It’s great to have you as a guest at DivineDetour.