Carla Laureano ~ More Than Your Past: Accepting Grace and Moving On

We’ve all been there: you’re lying in bed, trying to fall asleep, when all the failures of the day begin running through your head. I didn’t mean to be rude to the cashier at the grocery store. Did I hurt my friend’s feelings? I never managed to crack open my Bible. Before you know it, sleep is far away because you’re too busy counting all the ways that you’ve failed in your day and in your life.

Or maybe they are more “serious” infractions. A lie told at work to get ahead in your career. A relationship that you knew wasn’t godly but proceeded with anyway. And before you know it, it’s not just sleep that you’re losing, but peace and the ability to move through your day without the nagging voices of guilt and shame in your head. 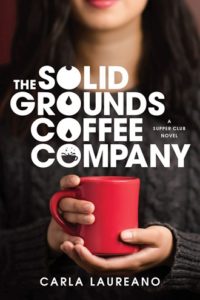 It’s one of these more “serious” infractions that Analyn Sanchez in The Solid Grounds Coffee Company is dealing with, compounded by many little failures that have her thinking she has to work double time to measure up. I wish that I could say her story was fabricated completely from my imagination, but as happens with most books, there’s more than a little Ana in me.

In my twenties, in particular, I wrestled with the memory of mistakes that I’d made and things that I’d done that I was ashamed of: maybe small matters to some people, but huge failures when held against my impossible standard for myself. I soon realized that constantly beating myself up over my past actions wasn’t a healthy way to live, so I instead turned my efforts to burying those accusing voices and numbing my conscience. It wasn’t that I wanted to continue to sin; it was just that I couldn’t stand to listen to the indictments in my head any longer.

It wasn’t until I was much older that I figured out that burying those feelings was just a stopgap measure, a Band-Aid on a more serious wound. I might have asked for forgiveness, but I never fully let go of my guilt and my shame; I figured that since I knew my sins were forgiven, I needed to stop thinking about them through sheer force of will.

And that will is the real problem, isn’t it? As Christians, we know that we’re offered forgiveness of our sins; we might even say that we accept it. But as we turn over those wrong actions repeatedly, as we dwell on them, as we allow them to weave themselves into the very fabric of our being, all we’re doing is putting ourselves in the place of God. Not accepting the grace that we’ve been freely offered and instead holding on to our guilt is like saying that we hold ourselves to a higher standard than the Almighty, as if it’s possible to out-holy the Most Holy. He might have forgiven us, but we refuse to accept that forgiveness and continue to punish ourselves in thought and action for sins that have already been removed “as far as the east is from the west” (Psalm 103:12, NIV). Deep down, we hold on to our guilt, not realizing that in our so-called hatred of sin, we’re committing another sin: that of pride.

Deep down, we hold on to our guilt, not realizing that in our so-called hatred of sin, we’re committing another sin: that of pride.

1 Peter 5:6-7 says, “Humble yourselves, therefore, under God’s mighty hand, that he may lift you up in due time. Cast all your anxiety on him because he cares for you.” You notice that there are no caveats in these verses (“everything except your anxiety over your sins”) and there’s also no wiggle room (“You know, if you really feel like it, maybe you should consider humbling yourself and casting your anxiety on him”). It’s a command. God knows us better than we know ourselves, and He knows that from the very beginning of His creation, pride in our own autonomy has been our downfall.

However, Psalm 103:8-9 also states, “The LORD is compassionate and gracious, slow to anger, abounding in love. He will not always accuse, nor will he harbor his anger forever.” We tend to believe that by beating ourselves up over our sins, we’re doing the will of God, but even God does not harbor anger or accuse us forever.

It was only in the last several years that I was able to truly pinpoint my difficulty in forgiving myself: I wanted to be perfect. It was not guilt over how I had sinned against God that plagued me; it was how far I had fallen from my own image of myself—just another iteration of my old enemy, pride. It is only when we can truly accept our own flawed natures, when we can realize that God perpetually gives forgiveness because we perpetually need forgiveness, that we can let go of our pasts, hold tight to grace, and live in the peace and freedom that is promised to all believers. 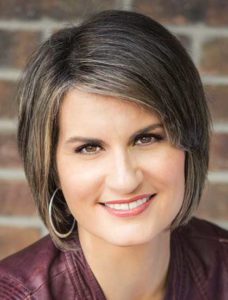 Multi-published author Carla Laureano is the two-time RITA® Award-winning author of contemporary inspirational romance and Celtic fantasy (as C.E. Laureano). A graduate of Pepperdine University, she worked as a sales and marketing executive for nearly a decade before leaving corporate life behind to write fiction full-time. She currently lives in Denver with her husband and two sons.

To purchase The Solid Grounds Coffee Company, log on to: