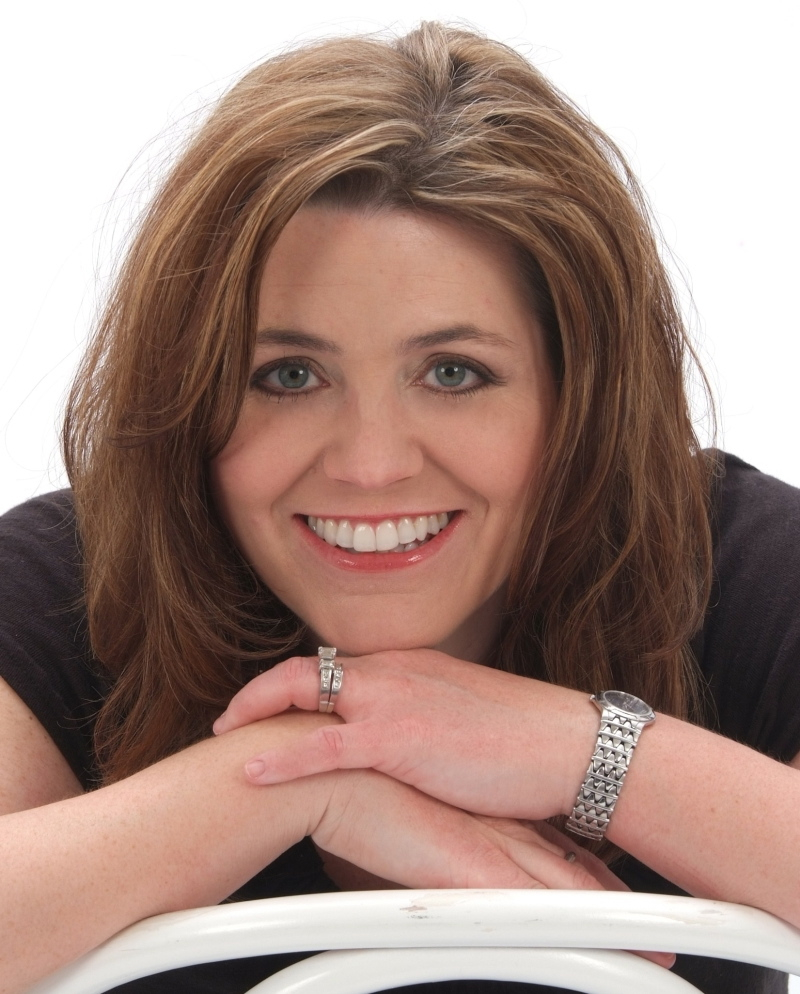 Youth culture expert, author and talk radio host Nicole O’Dell is the founder of Choose NOW Ministries, which is dedicated to battling peer pressure and guiding teens through life’s tough decisions. Nicole’s goal is to bridge the gap between parents and their teenage children.

A former resident of Teen Challenge, Nicole struggled during her own teen years. Subsequently, she has worked as a youth director, a Bible study leader for women and teens, and a counselor at a crisis pregnancy center. She is a mom to six children—including toddler triplets.

Nicole and her family reside in Paxton, Illinois.

Each book is topical based on a single Hot Button issue and its surrounding sub-topics. For example, the Hot Buttons Internet Edition deals with social networking, pornography, predators, cyber bullying, and more. The goal isn’t to convince parents to keep their kids off the net, but rather to arm them with the tools they need to navigate it in a safe and healthy way. 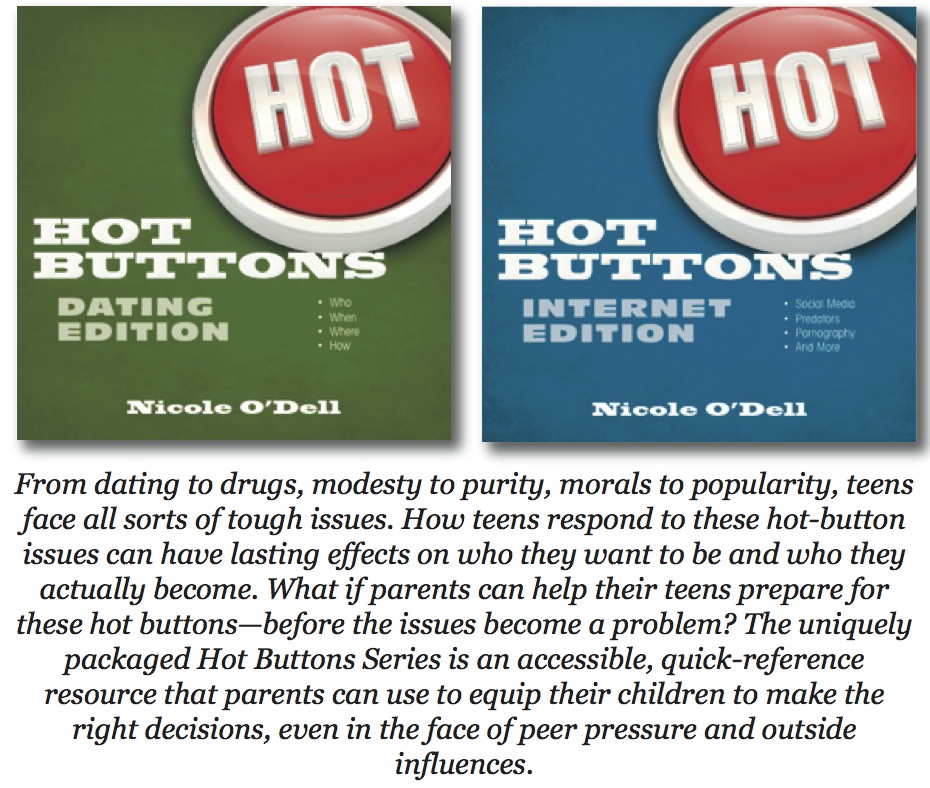 Same with the Dating Edition. It covers early relationships, physical boundaries, date rape, and more. Instead of just handing down rules, parents need to walk their teens through the details and equip them with the understanding of what’s out and how to rise above the peer pressure.

Each book is designed the same way. The first few chapters discuss the hows and whys of tackling hot buttons early and effectively. Part two dives into the topics with statistics and information that every parent should know. Next are the application portions of the book. This is when you put into practice the principles we discuss early on. Strategic Scenarios (up to 15 per book) allow you to walk your teens through a fictional situation and then offer options, choices, as to how they think they’d respond.

The final chapters of each Hot Buttons book will lead you and your family through confession and forgiveness and then help you walk into the future with a clean slate, armed with the tools you all need to face those hot buttons.

If you’re a parent of teens, or you know one, I hope you’ll visit www.hotbuttonsite.com to read more Hot Buttons posts each week. Also, the first two Hot Buttons books: Dating and Internet, released on June 1. Following soon after, on October 1, are the Sexuality and Drug editions.

How did you choose the topics to include in the series?

It’s really more a matter of how we chose which to do first. It was tough, really. I want to cover issues that are important to every family and that will impact every teen. I think these first two books, Internet and Dating, achieve that. The next two (10/1) are Sexuality and Drugs. I think we’d all agree those are vital subjects too. Upcoming books for 2013 will include social issues and other hot topics just as pressing.

How did you first become involved in working with teens—and the parents who love them?

When I was a newly committed teenage Christian, rescued from a pattern of really bad choices, I felt God calling me to spend my life reaching teenagers and helping to bridge the gap between them and their parents.

I love seeing teens open their eyes to the power of choices and commit to make good ones. And I treasure the moments when parents and teens heal a wound that had been festering and open dialogue about issues that matter.

Detours are a part of life, no matter what age we are. Can you tell us about a recent “detour” in your life that taught you something?

Oh, that’s a no brainer! My triplets were a HUGE detour. My husband and I decided we’d like to have that final baby number four. My other kids were 15, 9, and 6 at the time, and, to be honest, I had mixed feelings about starting over, but we felt it was right for us. 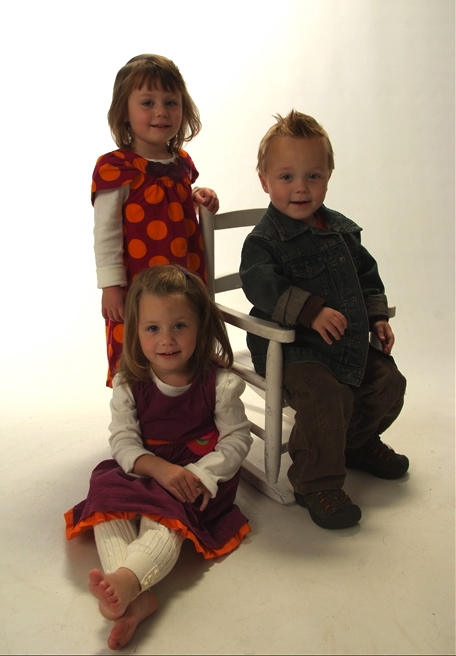 Imagine my surprise when I found out that I was having baby 4a, 4b, and 4c.

People would say, “Oh, I had three kids under four, so they were like having triplets.”

Uh, no. Unless you had three preemies in the NICU, and then brought home three 4.5-pounders who all needed to be fed every two hours around the clock which took at least an hour. Oh, then there was the pumping and changing diapers in that one hour between feedings. Around the clock. For months. With one on a heart monitor that went off between each feeding…

But, that stage passed quickly and it got easier. Three three-year-olds can be a real challenge some days, but I wouldn’t change a thing. Those little ones are the lights of our lives. It truly was a Divine detour!

What’s the title of the last GREAT book you’ve read for teens? For your personal enjoyment?

For teens, I love books by Melody Carlson, Travis Thrasher, and Jill Williamson—to name a few. It’s so hard to pick a single book. I’d probably have to go with Jill’s Replication. It’s about cloning and was just a really interesting book.

John Waller’s Waiting or As for Me and My House. They’ve both been pretty powerful to me lately. He was a guest on my Parent Talk radio show, and just hearing the story behind the songs made them that much more special to me.

James 1:2-4 Consider it all joy, my brethren, when you encounter various trials, knowing that the testing of your faith produces endurance. And let endurance have its perfect result, so that you may be perfect and complete, lacking in nothing. 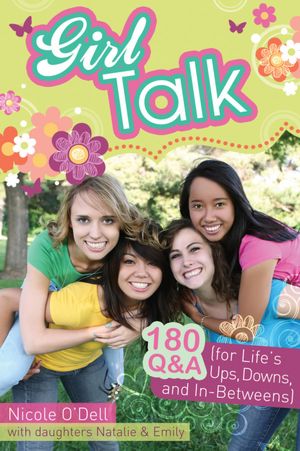 Your daughters Natalie and Emily co-wrote a book (Girl Talk, Barbour, February 2012) with you. When you’re not in writing mode, what’s one of your favorite “girls only” or all-family getaways?

Thanks for mentioning Girl Talk! That was such a fun Q&A project that I got to do with my daughters!

As for girlie getaways…hmm…my girls and I love to go shopping together. It can be a dangerous outing, so we don’t do it often, but it’s one of our favorite ways to get out and spend time alone.

Thanks, Nicole! It’s nice to have you back at DivineDetour.

Thank you!! It’s always great to be here.

For more information about Nicole, visit her website at www.nicoleodell.com and her Hot Buttons site at www.hotbuttonsite.com.