Under the Gum Ball Tree 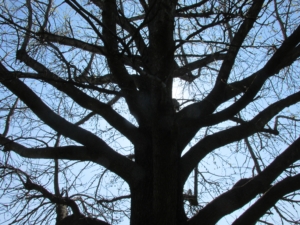 I smiled and waved as yet another neighbor drove by. I could only imagine what they might be saying about me. After all, I was crawling around on my hands and knees, picking up gum balls in my front yard. My pride was prickly about being seen like this. But it was the only way my body could handle “picking up” gum balls. A lesson on pride from a gum ball tree.

Twelve months later, as the king was walking on the roof of the royal palace of Babylon, he said, “Is not this the great Babylon I have built as the royal residence, by my mighty power and for the glory of my majesty?”

The words were still on his lips when a voice came from heaven, “This is what is decreed for you, King Nebuchadnezzar: Your royal authority has been taken from you You will be driven away from people and will live with the wild animals; you will eat grass like cattle. Seven times will pass by for you until you acknowledge that the Most High is sovereign over the kingdoms of men and gives them to anyone he wishes.”

Immediately what had been said about Nebuchadnezzar was fulfilled. He was driven away from people and ate grass like cattle. His body was drenched with the dew of heaven until his hair grew like the feathers of an eagle and his nails like the claws of a bird.

At the end of that time, I, Nebuchadnezzar, raised my eyes toward heaven, and my sanity was restored. Then I praised the Most High; I honored and glorified … the King of heaven, because everything He does is right and all His ways are just. And those who walk in pride He is able to humble. ~ Daniel 4:29-34, 37 NIV

The pathway of pride is the fastest way to self-destruction. King Nebuchadnezzar thought of himself in God-like terms. Consequently, He had to be humbled by God and live as a beast of the field to learn that he is merely human after all. That God is Lord of all the nations.

The Bible is full of passages about pride and humility—pride and/or proud is used over 100 times, while various versions of humble and humility are used over 70 times. Care to read them with me? Under the gum ball tree, of course.