Vince Antonucci ~ God for the Rest of Us 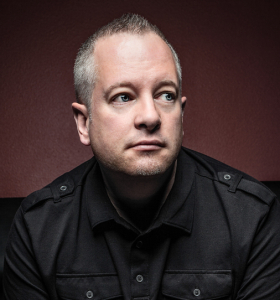 Vince Antonucci grew up in a home with a Jewish mother and a gambling addict father. He became a Christian in college by trying to prove the Bible isn’t true, and then he gave up his pursuit of a law degree to become a pastor. He is now the pastor of Verve, a church for people who work on and live around the Strip in Las Vegas.

He is the author of I Became a Christian and All I Got Was This Lousy T-Shirt, Guerrilla Lovers, Renegade: Your Faith Isn’t Meant To Be Safe, and two new books, God For The Rest of Us and Devo for the Rest of Us.

Vince and his wife, Jennifer, have two children.

You have a diverse background and collection of life skills. Were any of your occupations the result of a “Divine Detour,” i.e. an unplanned, God-sent redirection?

Yes! Well, not occupation, but … I became a Christian in college. At the time I was planning on going to law school. Immediately I thought of becoming a pastor — I was so amazed by God and His love, I wanted to spend all my time sharing it with everyone! But I was encouraged to continue with my plan of becoming a lawyer. I loved law school, but knew I was going down the wrong path. After my first year I transferred to seminary to become a pastor.

I love the title of your new book God for the Rest of Us (Tyndale House, August 2015). Please tell us about it and what inspired it.

I believe if you asked people who lived at the time of Jesus they would tell you the most surprising thing they learned from Him is that God is for the rest of us. It was a time when people were told God was only for the holy people, but Jesus came and hung out with sinful tax collectors and prostitutes. Today … we’re back to people thinking God is only for the holy people. 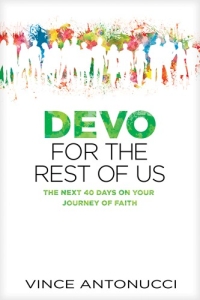 Devo for the Rest of Us: The Next 40 Days on Your Journey of Faith released earlier this month. What do you hope it will inspire in others?

Jesus said that we should abide in Him, and that if we abide in Him we’ll abound in having an impact in this world. Devo for the Rest of Us is intended to help people establish having a daily time with God that produces intimacy with Him. If they do, they’ll find their impact increasing.

If you had to describe yourself with one word, what would it be?

I love the word enthuse. Enthuse means to make others enthusiastic. I feel I have a lot of energy and passion and, at least on my better days, make people more enthusiastic for God and living bigger lives. But what I really love is the original meaning of enthuse. It comes from Latin. Theos meaning God, and en meaning in. The word enthuse means to be in God. Back then people thought that being in God is what produces enthusiasm. And, more than anything, I want to live my life in God.

1 Corinthians 4:10 says, “We are fools for Christ.” I feel like that describes my spiritual journey. I have done some crazy things, but I’ve done them because of and for Christ. After being a Christian for less than a decade, and without taking a church planting class or reading a book on it, I started a church. That church became very successful, but I took the seemingly stupid step of leaving it to start a church in Las Vegas, right off the Vegas Strip. Many said it was the last place a church could succeed in America. It may have been dumb, but we’re supposed to be fools for Christ! In my journey I’ve tried to listen for God and do what he says. It often doesn’t make a lot of sense, but I’m OK being foolish for Jesus.

Thank you, Vince! It’s an honor to have you as a guest at DivineDetour.