A Lesson in a Teacup 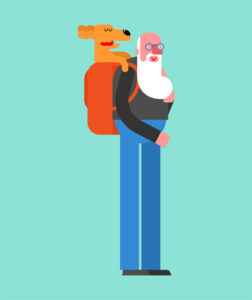 I was smiling as I walked in the vet’s office door. It was dog-grooming day, and I would be going home with clean and “smelly-good” dogs. I could hardly wait.

There was only one other client waiting with me. A rather scruffy-looking man. Work boots. Overalls. Flannel shirt. Beard. And a bath towel wadded on his shoulder. What in the world?

Then the towel started moving, and all of a sudden a head popped out. An itty bitty teacup puppy head. He/she started looking around—after giving the scruffy man a “big” kiss on his cheek.

I restrained myself from laughing out loud at the unusual pair. The puppy snuggled and licked and nipped his owner, who then snuggled more and more with his dog. Sooooooo cute. I asked about the puppy and off we went on a good “dog conversation.” After he finally went to the exam room, I smiled and thought about the unusual pair. A big scruffy man and an itty bitty teacup puppy. And a lesson from God about judging others by appearances only.

It wasn’t long before the man and his puppy were finished. The “teacup” was snuggled inside the towel as they headed out the door. I waved goodbye to them, as did the receptionist. And then, just like a Jack-in-the-Box, that little head popped out of the towel and looked back at us. The receptionist waved and said, “Goodbye, Harley.”

Once again I laughed and thanked the Lord for the lesson. Big or small, God loves us all. Even a scruffy man with his itty bitty teacup friend.