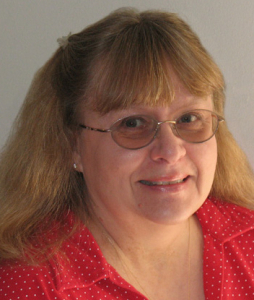 Award-winning author Alice K. Arenz has been writing since she was a child. Each of her first three novels was honored by American Christian Fiction Writers (ACFW). The Case of the Bouncing Grandma was a 2009 ACFW Carol finalist. The Case of the Mystified M.D., her second cozy mystery, won the ACFW Carol Award in 2010. And her mystery-suspense Mirrored Image was selected as a 2011 finalist. Alice’s fourth book, a mystery-romantic suspense entitled An American Gothic, released last year.

Alice and her husband, Chris, reside in Missouri.

Let’s talk about An American Gothic (Forget Me Not Romances/Winged Publications, August 2015). Please tell us about it.

Actually, the “gothic” is the story (that) the heroine, Lyssie, is writing. A couple paragraphs from her “novel” begins each chapter and the progression-tension of those paragraphs are a type of foreshadowing of the action that is about to take place in Lyssie’s life. Craven, Lyssie’s book, is a true gothic. The rest of the book is a combination of mystery-romantic suspense with elements of the original “gothic” feel.

Tagline: She came to Foxxemoor to write a mystery, not to become part of one.

Back Cover Copy: Devastated by the death of a child in her care, Lyssie’s heart strings are tugged when she finds another child in danger. Amid past secrets, lies, and betrayals of an old college friend’s family, she must choose a twin brother to trust. If she makes the wrong decision, she could not only lose her own life, but also the life of the child she’s come to love.

The heroine is a writer. Are there autobiographic elements to the story?

Not really — other than the fact that the opening location, Ha Ha Tonka State Park in central Missouri, is also one of my favorite places to visit. I love that place with the castle ruins and the story behind it — a dream to bring a European Castle and estate to Missouri and the tragedy that destroyed the place. Every time I go there I can’t help but start writing scenarios in my head, and An American Gothic is the culmination of my dream, and the perfect setting for Lyssie’s dream of writing her novel Craven.

I understand that this book has been a long time in the making. Any “divine detours” involved?

The first incarnation of Gothic was written over twenty years ago. After joining ACFW, I felt God was urging me to pull out the manuscript and adapt it to fit in with Christian fiction. As it already had so many Christian elements, it wasn’t a difficult thing to do — at least not that part. ; ) The hard thing was to bring the writing more up to date, not quite so formal. I knew God was with me when even this part went pretty easily. Then came an even bigger challenge.

The publishing house I’d been working with went a different direction, my chronic health issues grew worse, were added to, and I was out of the game — for good, I thought. After nearly five years, a brain that doesn’t always function quite as it should because of hypersensitivity to sound, light, etc., I figured it was time to put away my dreams and be thankful for the three books previously published. Then a dear friend started talking to her publisher, and they both convinced me I still had something to offer — no deadlines, no pushing, taking it at my own pace. I was able to get my rights back for my first three books (The Case of the Bouncing Grandma, The Case of the Mystified M.D., and Mirrored Image), and signed a contract that included them, An American Gothic, and two more books by August 2016. If this isn’t the epitome of “a God thing” and “divine detours,” I don’t know what is.

What’s next for you as an author?

With the help of my brilliant, computer-savvy son-in-law Greg, my novel Portrait of Jenny has been taken out of an old DOS word processing program and put into Word — intact! Right now I’m in the middle of the first run-through to make sure all the formatting is correct and then I’ll begin the task of editing. While I always say it’s “bringing it up-to-date” that’s kind of a misnomer because I’ll keep the year intact — the middle 90s — but will, hopefully, update the language style to something a little less formal, I guess would be the correct terminology.

Though Jenny has Christian overtones, it will be on Winged Publications more secular side.

Stories are an important part of the Old and New Testaments. Is there a Bible story, parable, or passage that has been particularly important to you (and/or describes your personal journey of faith)?

I love the story of the mustard seed — the faith that can move mountains. Sometimes, when I feel particularly low and so totally incapable of even existing amidst my various chronic illnesses, I remember that mustard seed and pull that faith, that strength from God to keep me going. He has been far more faithful to me than I have to Him, and I praise Him and thank Him for all He’s given me. Not just this renewed chance to be in the writing world, but for my family and the strength we draw from one another. This goes for my friends, too. You, Kathy, and so very many others, the support and love are all part of that mustard seed. And I thank you all.

At this time of year people set new goals. If you knew you couldn’t fail, what new goal or dream would you pursue?

Goodness, there are so many things that I would do — one of which is losing weight, getting healthy. But you said something that couldn’t fail… um… no, I’ll stick with that because that would mean I would be steady on my feet again and strong enough to follow through.

Thank you, Alice! It’s great to have you back at DivineDetour.

Thank you, Kathy, it’s been a pleasure! God bless you in all you do!