Andrew Peterson ~ The Warden and the Wolf King 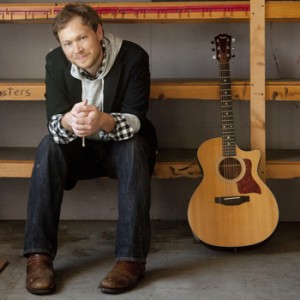 Over the past ten years, Andrew Peterson has carved out a niche as one of the most thought provoking and lyrical songwriters in Christian music. He has also established himself as a top-selling fantasy novelist. The fourth and final book in his Wingfeather Saga series, The Warden and the Wolf King, released earlier this week.

He and his wife, Jamie, and their three children, reside near Nashville, Tennessee.

Writing can be an adventure that’s rife with detours. You began writing the Wingfeather Saga series almost ten years ago. What was your biggest challenge along the way?

This is going to sound snarky, but the hardest part about writing these books was the writing. Re-writing and editing are a breeze compared to just sitting down for hours a day and writing that first draft. There were little hiccups along the way, like when my computer died and I lost a chunk of book four, or having to juggle my music career with the author thing, but really the biggest challenge was just mustering the discipline to keep writing.

What did you learn (about life, faith, and/or even yourself) in the process of writing the series?

Rule number one of storytelling is that you need conflict. Without conflict nobody is going to care about your book, and your characters will never change. That down-to-the-marrow change—the transformation from the Janner Igiby in book one to the Janner Wingfeather at the end of book four—is the heart of the story, and the only way for me to make him into who I wanted him to be was by way of conflict. To put it simply, I had to ruin Janner’s life. I had to send him away from home, away from comfort and familiarity and into anguish and the homelessness of a perilous journey. It felt cruel at times, but I always loved him and knew I was bringing him home. (If you’re a Christian, the metaphor should be fairly obvious.) I don’t think I understood sanctification until I started writing fiction. The presence of conflict and suffering in my life is not an indication of God’s displeasure with me, but may rather be an indication of His affection. The New Testament talks a lot about this sort of thing. It also, in Hebrews, refers to God as the author of our faith. 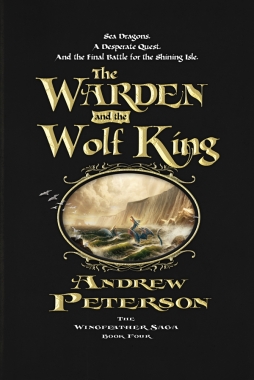 Let’s talk about The Warden and the Wolf King (Rabbit Room Press, July 2014), the final book in the series! Please tell us about it.

I still haven’t figured out how to talk about the books without spoiling things for those who haven’t started the series. I can tell you that this is my favorite book of the four. It was also the hardest to write. The whole saga is the story of three siblings who are being hunted by a evil dude named Gnag the Nameless, for reasons they don’t understand. Gnag and his Fang minions have all but destroyed the world searching for the children, and in this last book Gnag’s end-game is revealed. It’s deeply satisfying to finally tie up all the loose ends from the first three books, having carried certain scenes in mind for almost a decade.

Readers were a vital part of this project. Did you expect such an incredible response to your Kickstarter campaign?

I wish you could have seen the Peterson family in our living room the night the Kickstarter campaign ended! We were literally dancing around. It’s hard to remember a time in my career when I’ve felt more loved or affirmed. It was truly overwhelming. Part of that is because these books, until now, have been the smaller part of my career. I think of music as my day job, and I’m moonlighting as a writer. So seeing that the books have connected the way they have was the best kind of surprise. Without the Kickstarter backers we wouldn’t have been able to make the beautiful hardback edition, the map, the audiobooks, the illustrations, the prints, or the Creaturepedia. It was a dream come true to send the Wingfeather Saga out in style.

Your last album, Light for the Lost Boy, was released about a year and a half ago. When can we expect new music from you?

I’m heading into the studio next week to record a few songs for a best-of project due out this fall. I was creatively exhausted after finishing The Warden and the Wolf King, so we figured it would be a good time to release a collection of favorite songs from all the records, rather than trying to write a whole album. The fun part is, I’m re-recording several of the old songs and adding a couple of unreleased tracks.

How will you celebrate the release of the new book?

We’re having a costume party at a bookstore in Nashville. My daughter Skye and I will sing a song from book three, and illustrator Joe Sutphin will be on hand to share his original artwork. Hopefully we won’t be set upon by toothy cows.

As a reader, who is your favorite author (and/or authors)? What are you reading right now?

You have had a menagerie of pets. Did any of them make cameo appearances in the Wingfeather Saga series?

I had a pet sea dragon once, which I kept off the coast of Florida. That, of course, gave me the idea for the sea dragons in the story. I also had a pet troll, and my grandparents foolishly raised a gobble of feral toothy cows. May they rest in peace. My grandparents, I mean.

Thank you, Andrew! It’s a pleasure to have you back at DivineDetour.

For more information about Andrew’s books and music, visit his website.

To purchase The Warden and the Wolf King, logon to The Rabbit Room or the following retail sites: