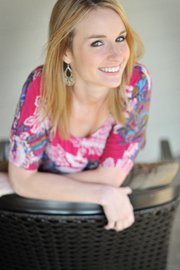 Since November of last year, Becky Kelley’s music video for Where’s the Line to See Jesus? has been viewed more than three million times on YouTube. This year she’s back with a new album.

Becky made her stage debut at two years of age, but after earning a college degree at David Lipscomb University in Nashville, she opted out of the music scene. A decade later, she’s back in full force.

To view the Where’s the Line to See Jesus? video, click photo to the right.

Please tell us about your new album, A Keeper, which releases December 16.

Yes—so excited about that! I wrote all of the songs except one, which is a remix of the 1960’s hit Tell Him. These were all recorded in Nashville, Tennessee with my longtime friend and amazing musician/producer, Pat Flynn. He has been in the Nashville scene for a long time, so it was an absolute blast to work with him.

He was the first one I called last year when Where’s the Line really blew up . . . I just wanted a friendly voice to talk to about everything, (someone) who really knew the business like he did. After talking more about possibilities of my next step, we decided to record a selection of songs I have written over the last ten years or so. We had so much fun and I think he did a really great job capturing the essence of my songs, which range in topics from my faith to love and heart-break, etc. It’s essentially a pop album with roots in country, rock, and even a little bit of the blues. 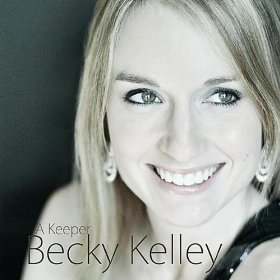 What’s the first single from the project?

I think our first single will be Send an Angel . . . it will be interesting to see what others think about this album as a follow-up to Where’s the Line to See Jesus. We decided to take the most natural step after much thought and prayer, so I really hope the album is well received.

Who wrote Where’s the Line to See Jesus? What’s the story behind the song, how did you become a part of it, and where did you shoot the music video?

My dad wrote the song after my sister came home from taking my nephew to the mall a few years ago. They were in line to see Santa, and he looked up and asked her if they were in the line to see Jesus . . . how precious is that?

She came home and told my dad what happened, and he wrote the song that day. We’ve had some people claim they don’t believe it’s a true story, but it absolutely is. After my dad tried to get the song some attention in Nashville with no luck, he asked if I wanted to record the song with him at a studio here in St. Louis, where we live. It was there where our producer, Chris Loesch, rewrote the second verse adding a little flair to the story with the boy being an angel, which we all loved.

The video came next to bring attention to the song, and did it ever. : )  We shot the video in seventeen hours all in one day in Illinois. We released it Thanksgiving weekend last year, and the rest is history.

This entire experience has been an unexpected detour! : )  The really funny part is back when I was nineteen, Pat Flynn saw me singing in Nashville back when I was in college there at Lipscomb University. He wanted to do an album with me then, and I turned him down, came home and got married, but always thought about “what if . . . ” Who knew ten years later I would be directed back to working with him—sometimes God gives you second chances, and this time it was clear as day what I should do. Even if nothing ever happens with my music, I am 100% OK with that . . . I’ve just really enjoyed this experience, and I hope I can inspire some people along the way.

What is your favorite Christmas comfort food and why?

I love homemade chocolate chip cookies all year, but especially at Christmas! My grandma makes the best cookies and always had trays and trays of them on Christmas Eve for everyone. She doesn’t do that anymore, but those memories will always stay with me.

Please tell us about one of your favorite Christmas traditions.

I have a four-year-old and a four-month-old, so we are starting to create our new traditions, which is so much fun. My newest favorite tradition is The Elf on the Shelf . . . if you haven’t heard about him, look him up! It is the best! One that I have loved for a while now is always watching A Christmas Story on Christmas Eve . . . it doesn’t feel like Christmas can come until we watch it! : )

Which best describes your perfect Christmas tree: an elegant, evergreen covered in the latest couture; a vintage aluminum tree with shiny glass bulbs; a shaggy cedar covered in homemade ornaments and strung with popcorn; or a palm tree adorned with pink flamingos?

I used to be #1 before kids, but now we’re starting to look like #3 with the homemade ornaments everywhere . . . which I LOVE! : )

Thanks so much, Becky! It’s nice to have you at DivineDetour. Merry Christmas and best wishes with the new album.

For more information about Becky and her music, visit http://beckykelley.bandcamp.com/ or

To view the Where’s the Line to See Jesus? music video, logon to http://wheresthelinetoseejesus.com/index.php?option=com_content&view=article&id=93&Itemid=159.

To purchase Becky’s music, logon to: