Chris Fabry is the host of Chris Fabry Live!, a two-hour radio show heard weekdays on Moody Radio, and the author of more than 40 fiction and non-fiction books.

In 1998, Jerry Jenkins and Dr. Tim LaHaye hired Chris to write the series, Left Behind: The Kids. During the next six years, he wrote 35 books for that series. His adult fiction outing, Dogwood, took six years from start to publishing and won a Christy Award in 2009. It was followed by the acclaimed June Bug, and his latest release, Almost Heaven.

Born in West Virginia, Chris now lives with his wife and family near Tucson, Arizona. 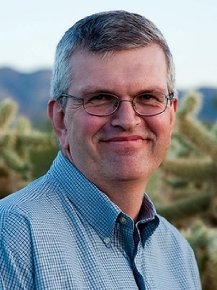 You began your radio career even before finishing college. Did you know at that time that you also wanted to be a writer, and how did you go about reaching that goal?

I actually began in radio in high school, but I was always writing poems, dramas, stories, songs, etc. as a child. I think writing was in my blood. I studied journalism, not knowing I could be a full-time writer any other way. Then, when I was in my 30s, I felt the need to really go full force toward getting published so I spent years at the 808 section of the library, read Writer’s Digest Magazine and read lots of fiction I wanted to write. That was the path for me. That and meeting Jerry Jenkins and having him say, “I can help you.”

What was the best piece of advice you received as a writer who was just starting out and learning the craft?

Seat in chair. Every day. Read everything. Turn off the TV. If you want to write, you’ll find the time. Make the time.

Ha! My whole life is an unexpected detour. Our recent battle with mold illness, while I would not choose it, has provided so many avenues of blessing in the midst of the pain. Faith is believing God is at work even when you don’t see a way out of the detour. Faith is seeing the detour as God’s plan rather than the one you had.

Let’s talk about your new book, Almost Heaven (Tyndale House, September 2010). What was the inspiration for it?

I met a listener to my radio show in January of 2009. She told me the story of Billy Allman, the real man. I was so captivated by his life that I wanted to write a fictional story around the events that led to his death and a story that had been cooking in my head for a few years.

One of your characters in the book is a guardian angel. Did you find it difficult to write from that point of view, and how did you prepare for it?

It was quite challenging. I’ve always been fascinated by angels. I took a course at Moody Bible Institute on angelology and I know there are many things written about angels that just aren’t true theologically, so I wanted to get as close as I could to what a real angelic being might go through on an assignment. It was difficult to see things from the eternal perspective because I am time-bound. 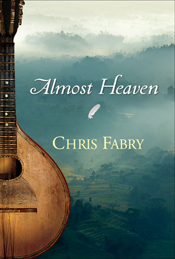 Billy Allman’s faith was key to his success in the face of adversity. You recently co-wrote, with Drew Brees, a biography with a similar theme, Coming Back Stronger, Unleashing the Hidden Power of Adversity (Tyndale House, July 2010). Is there also a faith element in the Brees’ book?

Absolutely. Drew and his wife went to New Orleans to look at the opportunity to play there, then went to Miami. Katrina had just hit New Orleans and Miami…well, there was just no comparison. But God did something to them as they drove through that devastation and they both felt a “calling” to New Orleans. And when God calls, it’s important to listen.

Pumpkin seeds. I have them at my desk all day, except when I’m on the radio. : )

This website is about both writing and music. Do you also have musical talent?

I play piano, guitar, and sing. Not well, but I enjoy it. My kids all play and sing as well.

Definitely the child in the adult’s body who wants to be a warrior.

I’m a dog lover. On your website, you write about two very important dogs in your life, Pippen and Frodo. Please tell us about them. Do you have other family pets?

Thank you for your time, Chris. It’s a pleasure to have you at DivineDetour!

For more information about Chris Fabry, visit his website at www.chrisfabry.com or his blog at http://chrisfabry.blogspot.com/

To purchase Almost Heaven and other books by Chris Fabry, logon to: