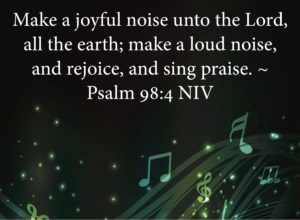 She was lying on the floor with her back to me but her head was turned and her face was giving me a look that undoubtedly said, “Really? You sound awful.”

Yet I had been so happy singing!

I was reminded of the looks like that in church. Looks that had said —

“You’re singing off key. Be quiet.”

“You have the words wrong.”

“Your singing voice is awful.”

And “If you can’t sing better than that, shut up.”

Yes, I’ve received a few looks like that in church. How about you?

But God created our voices to sing praises to Him. If He’d wanted all of us to sing only on key, He’d have given us the talent. He loves it, and us, even if all we are doing is making a joyful noise! It may sound like noise to us, but to God’s ears it’s beautiful.

And it’s not just people who are made to sing praises to our Creator. All of creation sings. Job tells us that the stars sang at the creation of the world. The Bible tells us that the seas and floods roar. The mountains and hills are joyful together. The birds sing along with the trees, which also clap their hands. The wilderness and its cities lift up their voices. The meadows with their flocks and the valleys with their grain shout for joy and sing. Even the stones cry out and sing together. And as hard as it might be to imagine, those in the dust will one day awake and sing as the angels join in praising God. So, until that time comes, we are to keep singing and making joyful noises to the Lord.

Next time you hear someone sing off key, be thankful they are offering a joyful noise to the Lord. He is.