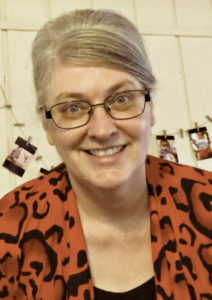 Pam Hillman is a bestselling CBA author who writes Historical Christian fiction set in the eighteenth and nineteenth centuries. Born east of the Mississippi and a hundred years too late, Pam still boasts of wrangling calves, milking cows, and putting up hay.

Her life in the country—and her love of the old west—brings authenticity to her work and depth to her characters, something that has been recognized many times in the publishing industry by way of dozens of writer’s nominations and awards.

Pam lives in Mississippi with her husband and family.

Reading. Actually, before that, I think. My favorite part of 1st grade was when Mrs. Smith sat us in a circle and read to us. Then, later, I remember that hot, tired time of day after recess when my 3rd grade teacher would let us all rest our heads on our desks, and she’d read to us. Not only did we all get 30-40 minutes of rest (plus, now that I think about it, she did too!), I was transported to another place and time. I wanted to be able to do that … take readers to another place and time.

Those who “create” usually tap into a personal “toolbox” of elements to define their style. What two or three elements most define who you are as a storyteller?

My Christian worldview, my rural farming and ranching roots, and my dogged-determination to never give up are all part and parcel of who I am and these characteristics are found within my plots and most of my characters. And if they’re not there at the beginning, it’s usually an area they’re faced with during the course of the story. 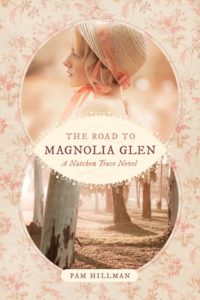 Let’s talk about your new book, The Road to Magnolia Glen (Tyndale, June 2018). Please tell us about it and the series.

My Natchez Trace Novel series follows the lives of three brothers who arrive in the Natchez District from Ireland at different times and under different circumstances. While readers didn’t meet Quinn O’Shea, the hero in The Road to Magnolia Glen, in The Promise of Breeze Hill, they learned a little bit about him and the other brothers through Connor. Stuck in Ireland caring for his younger brothers while his eldest brother had migrated to the colonies, Quinn felt like he’d missed out on life. In other words, he’d never had the chance to “make merry with his friends” if that rings a bell.

So, when Quinn makes his way to the colonies with his younger brothers in tow, he plans to strike out on his own. But he finds that leaving is harder than he thought when he’s called upon to rescue Kiera Young and her sisters from a less than savory situation.

In the back-cover copy, you equate freedom with sacrifice, a fitting topic in light of our recent July Fourth holiday. Book One also deals with sacrifice. Is this a general theme throughout the series?

Great question. I hadn’t thought of sacrifice as being woven throughout the series, but, yes, it is. But sacrifice isn’t quite as horrible when it’s for someone or something you care deeply about. Men and women sacrificed their possessions, their land, their homes, and many their lives so we could celebrate our independence as a nation.

While my fictional heroes and heroines’ sacrifices pale in comparison, I can easily point out multiple sacrifices that each of the main characters in this series makes. Sometimes it’s for loved ones, but sometimes it’s just the right thing to do.

And we should all strive to do the right thing.

Oh my. This is such a loaded question. I love food and would never shame any food group by leaving them out, but if I could have anything (calorie/carb/fat free) to celebrate finishing a book, a hot fudge brownie topped with vanilla bean ice cream would do the trick.

Now look what you’ve done. You’ve flung a craving on me! Must go make some brownies. Thankfully, I have a gluten-free, sugar free recipe for both the brownies and the ice cream.

I think I’d have to say that I’m like Hadassah in A Voice in the Wind by Francine Rivers. A devout Christian in 70 A. D Jerusalem, Hadassah still had fears and worries that she could be strong in her faith when tested … even to the point of death.

I’m a hybrid, I think. In some ways, I tiptoe around decisions, living on the fringes of things, but in other ways, I’m a take-charge kind of girl. I make split-second decisions much better than long-term ones. Given enough time and without the need to decide quickly, I can debate a decision for months. But, on the other hand, I can whip out a decision (for my adult kids) almost before they’ve finished describing the problem. I think this is why they don’t come to me with their problems anymore. Ha!

Ah, pets. Love ‘em! Currently, we have a dog named Dakota. No cats because never the twain shall meet as long as Dakota rules the yard.

As a child, my favorite pet was a beautiful tomcat named Twinkle. I had a children’s book (The Kitten Twins) and when we had kittens born on the farm, they looked like the kittens on the book, so they were dubbed Twinkle and Boo. Mind you, I got the book when I was about eight. The kittens didn’t come along until I was in my early teens. 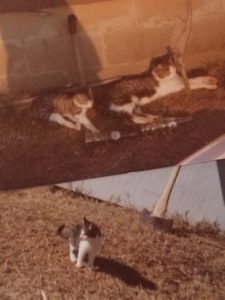 Twinkle was a big, muscular boy who loved his “Pem,” but Boo was a stand-offish little girl, and never cared to be petted or held. Twinkle liked to ride curled around my shoulders, and he was so petted that when my mother went to the dairy barn in the mornings, he’d fall down in front of her and roll over and over until she picked him up and carried him the rest of the way. Aw

One day my grandparents were visiting, and we were standing close to the milking barn. My grandmother kept insisting that someone was calling my name. She thought there was another child somewhere around. Turns out that Twinkle had climbed up in the eaves of the barn and was meowing. But his deep-throated meow “Pem, pem, pem” sounded like he was calling for me to come rescue him.

Aww, Pam. What a great story about Twinkle! Thanks for visiting at Divine Detour!

Thank you! It’s my pleasure to visit. Thank you for all you do to spread the word about Christian fiction.