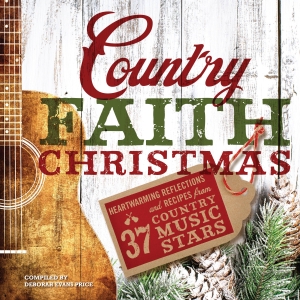 Deborah Evans Price has spent a lifetime helping people tell their stories. Her bylines have been featured in major publications, the short list of which includes Billboard, Rolling Stone Country, People, Country Weekly, and Simple Grace, among others, and she is the 2013 winner of the Country Music Association’s Media Achievement Award. Deborah has been interviewed by key media outlets, running the gamut from ABC’s Prime Time Live to the Gospel Music Channel.

She and her family live on a hilltop south of Nashville, Tennessee.

Let’s jump right in and talk about Country Faith Christmas (Regnery Faith, November 2015). It’s a beautiful book. Please tell us about it.

Thanks so much. I’m really excited about Country Faith Christmas because it includes thirty-seven of my favorite artists sharing their Christmas memories, beloved traditions, family photos and great recipes. It was fascinating to me to hear how everyone celebrates Christmas and the family traditions they hold dear. It was also interesting to see what kind of recipes are part of their holiday celebration. Neal McCoy gave us a recipe for a Filipino dish called Pancit, and Gene Johnson from Diamond Rio sent us a recipe for Korv, a Swedish sausage.

I was surprised that chili is part of some folk’s Christmas celebrations, and we got tasty chili recipes from Canaan Smith and Luke Bryan. Of course, no holiday would be complete without some good fudge, and we have Wade Hayes’ recipe for Old Fashioned Fudge, and Tyler Hubbard from Florida Georgia Line shared his mom’s Fantasy Fudge recipe. Brad Paisley’s mom, Sandy, gave us her recipe for whole grain gingerbread, which looks delicious!

I’ve also loved seeing the old photos. The one of Alan Jackson as a little boy sitting on Santa’s lap is one of my favorites. There’s a cute one of Vince Gill holding a football he got for Christmas, and the one of little Duane Allen dressed in a cowboy outfit is adorable! Little Big Town’s Kimberly Schlapman wrote the foreword for the book, and it’s wonderful. She’s such a busy lady. I really appreciate her taking time to do that.

What inspired the project?

Two years ago I did a book for Harper Collins Christian Publishing called Country Faith that featured fifty-six artists talking about their favorite Bible verse and why it was special to them. The idea was the brainchild of Bob DeMoss, who was at the publishing company then and was looking for ways to get people more engaged in the Bible. He thought that would be a good way to reach out to country music fans. Bob has since left Harper Collins Christian and went to work for Regnery Faith, which is based in Washington DC. He thought it would be a good idea to continue the Country Faith brand with a Christmas book, and the next thing I knew I was immersed in Christmas last April, May and June getting this book ready for publication this fall. 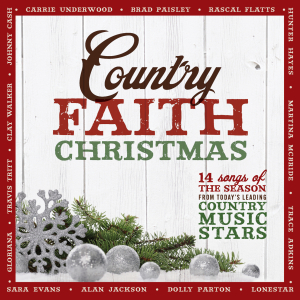 And another thing I’m very excited about is that we now have a line of Country Faith jewelry. It’s manufactured by Bob Siemon Designs in California and includes necklaces, bracelets and key chains. My business partner, Danny McGuffey, struck the deal and it’s been such a great addition to the Country Faith brand. Laura Lung and the gang at Bob Siemon have been terrific partners to work with. One of my favorite items is a guitar pick necklace with a cross on it. I wear it all the time. 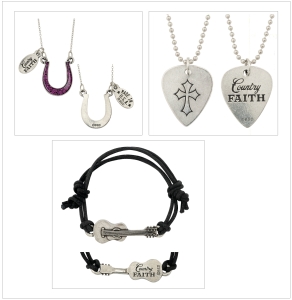 There are several surprises in the book, including Advent Meditations by Charlie Daniels. How did that come about?

The advent devotions were Bob’s idea. He thought it would be great to include four advent meditations to remind people of the true reason for the season. When he mentioned getting an artist to do them, I immediately thought of Charlie Daniels because he’s a great writer, he knows the Bible and he loves the Lord. I think he did a terrific job! I cried the first time I read them. They are beautiful and capture the essence of Christmas.

One of my favorite stories in the book is Jimmy Wayne’s recounting of the Christmas Eve he spent working in a prison. Was there a story in the book that particularly touched, or even surprised, you?

Jimmy’s story is one of my favorites in the book. I’ve interviewed Jimmy many times over the years, but that’s something new I learned about him in doing this book.

One of the stories that really touched me was David Bellamy of the Bellamy Brothers sharing how their family used to take Christmas dinner to two elderly men who lived in shacks near their ranch. Their kindness doesn’t surprise me because I’ve known the Bellamys for years, and they are some of the most generous people I know. But I loved hearing from David how their parents instilled in them at an early age the importance of sharing with those less fortunate, and even now he has such fond memories of taking Christmas dinner to Les and John and making their holiday brighter.

Another story I love is Diamond Rio’s Gene Johnson sharing his favorite Christmas memory — marrying his wife, June, on Christmas Eve when he was just twenty-three in the First Presbyterian Church of Sugar Grove, PA. I could go on and on and on. There are so many wonderful stories in this book, and I’m grateful to everyone for taking time to share them.

I love Silent Night. It’s been my favorite since I was a child. My dad was in the Air Force, and we lived in Japan twice while I was growing up. I remember one of my teachers teaching us to sing it in Japanese when I was a child and it was really beautiful in Japanese too. Wish I could still remember the words in Japanese.

I have to confess another one of my favorite Christmas songs is Santa Claus is Comin’ to Town by the Jackson 5. Nobody does that song better than Michael Jackson. It’s on an old Motown Christmas CD we play every year, and my son, Trey, has loved that since he was a kid. I also love The Oak Ridge Boys’ The Most Inconvenient Christmas. It always makes me smile. What a great song!

I love, love, love turkey! I never get tired of it, and I love it any way it’s cooked — baked, fried or smoked. My husband is a great cook and for Thanksgiving he fried two turkeys and smoked one on his Big Green Egg smoker. There was lots of turkey. I’m also a big fan of peanut butter cookies with Hershey kisses on top. Yum!

Have you ever had an unexpected or unusual Christmas celebration? Perhaps one that has now become a tradition?

That’s a tough question. We generally do the same things year after year. All the family — siblings, nieces, nephews, cousins, aunts, etc. come over to our house on Christmas Eve, and we eat tons of food and open presents. Christmas morning, we get up and see what Santa brings then usually take a nap. After that, we start cooking Christmas dinner and getting ready for family and friends to come over later in the afternoon.

One Christmas tradition that has evolved in recent years involves our best friends — Debbie and Russ. In years past, we would always try to find time to get together for dinner and celebrate Christmas with them before they headed to their hometown in Virginia for the holidays. Well, in recent years, it seems like it’s been harder and harder to lock in a time to celebrate before Christmas because everyone is so busy wrapping up work for the year, going to holiday parties, last minute shopping and everything else. Russ and Debbie always come over on New Year’s Eve, so the past few years, we’ve been opening Christmas gifts on New Year’s Eve. It takes some of the stress out of trying to find a date before Christmas to hook up, and it prolongs Christmas cause we are still celebrating it on New Year’s Eve. So it has now become a fun tradition.

Another thing we do on New Year’s Eve is pass around a notebook and write our resolutions. We’ve been passing around that same notebook for years and it’s interesting to see which resolutions we’ve been able to keep. For example, my friend Gail has been wanting to go on a mission trip for several years and in October, she went to Guatemala, so this year she can happily look back and say she did it!

Ooohhh! A palm tree adorned with pink flamingos sounds great! But our Christmas tree is always a shaggy cedar tree covered in ornaments we’ve had for years. We live on top of a hill and have ten acres, so we always just go outside and cut down a tree somewhere on our property. It’s a tradition I look forward to every year.

Then we have ornaments we’ve been collecting for years. Some are ones that my son Trey made when he was a child and others are promo items with country artists on them that have been issued with Christmas albums over the years. And also when I travel I like to collect Christmas ornaments. I love it cause when I look at the tree it reminds me of my adventures throughout the year.

As a dog lover, I have to ask, will there be any “pet” stockings hanging from the mantle at your house this year?

Yes, there will. We have a little Fox Terrier named Lily, and I also have a pet rabbit named Butters, who will be really disappointed if Santa doesn’t leave her extra treats. (She’s a little spoiled.) Also, we have been taking care of my niece Michaela’s pet pig. Her name is Coco Channel, and I’m sure Santa will be leaving her some treats too. She’s a little diva!

Merry Christmas, Deborah! It’s always nice to have you as a guest at DivineDetour.

Thanks so much for having me! Merry Christmas and wishing you many blessings in 2016!