Do you want to be encouraged? Psalm 23 ~ A Devotional 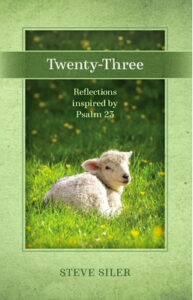 It was August 2020 when Steve Siler invited me to contribute to a 21-day devotional he was putting together. Life was on hold that summer and most of us were struggling. But, always the encourager, Steve was pushing through, doing his best to make a difference in a world that needed hope.

Like almost everyone else that year, I was stalled. Writers call it blocked. I had a pending offer to write two more books, but I couldn’t write the first word. How could I promise Steve I would submit a devotion on a deadline?

Anyone who has experienced writer’s block will tell you that it’s usually caused by fear. The fear of failure. The fear of not being good enough. The fear that we aren’t up for the challenge.

But, of course, we don’t have to do anything on our own—whether that’s write a book, write a short story, or even get through life. Our Heavenly Father walks with us every step of the way.

He also sends encouragers. And my encourager that summer was Steve, who continued to nudge me about the devotion. And … I’m so grateful he did. It’s an honor to be included in Twenty-Three: Reflections Inspired by Psalm 23. There’s some really good encouragement between the covers of this book—all of it based on Psalm 23.

If you need encouragement, I hope you will pick up a copy.

Read more about Twenty-Three: Reflections Inspired by Psalm 23 at Music for the Soul. You can also buy it on Amazon.