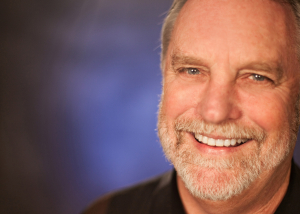 Larry Osborne holds both a Master of Divinity and Doctorate degree from Talbot Theological Seminary. Since 1980 he has served as one of the senior pastors at North Coast Church in Vista, CA. During that time, the church has grown from 128 to nearly 10,000 in weekend attendance.

Dr. Osborne has a passion for helping Christian leaders and is a nationally recognized trainer of leaders, pastors, and church planters, traveling extensively to speak at conferences and mentoring events in both the secular and church world. His books include Accidental Pharisees, 10 Dumb Things Smart Christians Believe, and The Unity Factor.

Larry and his wife, Nancy, live in Oceanside, CA. They have three married children.

Sure, lots of times. One example harkens back to the earliest years of my ministry at North Coast Church. Nothing went right. It was a season that my wife and I still call the “dark years.” Yet looking back, God was at work. The lessons learned, the ministries formulated, and the people who came aboard during that difficult season laid the groundwork for everything good that would follow. 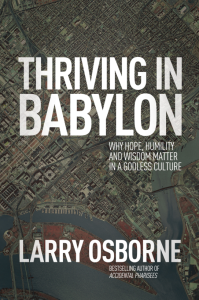 Let’s talk about Thriving in Babylon (David C. Cook, April 2015). Please tell us about it.

Daniel reveals what godly living in a godless environment looks like. He shows us what it takes to thrive (not merely survive) in the most evil of times. I wrote Thriving in Babylon to explore the character and actions that set Daniel apart and to show how they can be applied to the life we’re called to live today in a world that is becoming increasingly like Babylon at breakneck speed.

What led you to write this particular book?

For a long time, I’ve had a growing concern that the more our culture has become like Babylon, the less we’ve become like Daniel. I felt there was a great need to focus on his story from an adult perspective, asking what it was that enabled him to not only stand strong, but to thrive, impacting the most wicked of nations for God’s glory.

If we want to “thrive” like Daniel, what’s the first thing we need to do?

We need to regain an eternal perspective. Daniel begins his book with the simple statement that it was the Lord who gave Jerusalem and the devoted things from the temple over to Nebuchadnezzar.

Those words don’t get enough attention. We often blow right by them in order to get on with the story. Daniel had a deep understanding that God was in control of who was in control – and it was this eternal perspective (that) enabled him to live a life of hope, humility, and wisdom.

Ice cream. Why? I don’t know. It must be genetic. It’s an addiction my dad passed on to me.

In Acts 16:6-10 the Apostle Paul and his entourage can’t figure out exactly where they are supposed to go on their next missionary journey. They tried to go to Asia Minor and then to Bithynia. But the Lord kept slamming the door shut. Finally, Paul had a dream about Macedonia and figured maybe that’s where they should go. So they headed out to Macedonia.

Paul couldn’t always determine God’s leading with clarity as he looked ahead. But the hand of God always became crystal clear in the rearview mirror. That seems to be the story of my life.

It’s been a while since I read a GREAT book. I read lots of good ones, but few GREAT ones.

Sorry. We have no pets. We like our freedom too much : )

Thank you, Larry. It’s a pleasure to have you as a guest at DivineDetour.