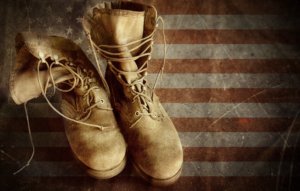 Endure hardship with us like a good soldier of Christ Jesus. ~ 2 Timothy 2:3 NIV

“Bud, I think we should join the Coast Guard.”

My dad gave his co-worker a puzzled look. “What’s the Coast Guard?”

“It’s the little white boats that run up and down the Mississippi River,” his friend explained.

It wasn’t exactly what Daddy had been planning. He went to work for Rawlings Sporting Goods in St. Louis after he graduated from high school in 1939. He and Mom were high school sweethearts planning to marry after Mom graduated in 1941. Still, the little boats running up and down the Mississippi didn’t sound that bad.

So in January of 1940—just a couple of weeks after their discussion—my father and his friend joined the United States Coast Guard. Boot training was on Ellis Island, New York. And the little white boat on the Mississippi River turned out to be a 327-foot cutter on convoy duty in the Atlantic, which included being in port in Lisbon, Portugal when Pearl Harbor was bombed.

So, thanks to WWII, the 1941 wedding of the high school sweethearts was postponed. Finally, four years later in November of 1945, they were married in Boston, Massachusetts, a few months before Daddy was discharged in June of 1946.

My parents are just one example of the thousands of military personnel and their families whose lives have been changed, interrupted, and put on hold because of the sacrifices needed to keep our country free. Those who have left behind the comforts of home and their personal lives to fully devote themselves to duty realize that anything less would put their mission of freedom—and ultimately our country—in jeopardy.

Many, like my parents, have been willing to endure hardship because they knew they weren’t bearing it alone. Our Lord and Savior Jesus Christ endured hardship, ultimately sacrificing His life for freedom—freedom from sin and death. Our freedom to live for all eternity with Him.

So, as we celebrate Memorial Day, may we humbly and gratefully remember all past and present military personnel and first responders, as well as their families, for the sacrifices and hardships they have endured for us. Thank you! May God bless them always.

And may God bless America.