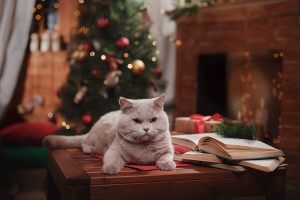 The real Christmas is waiting patiently for us to see the truth.

See to it that no one takes you captive through hollow and deceptive philosophy, which depends on human tradition and the basic principles of this world rather than on Christ.

My friend Sue loves telling stories about her two cats — Adam and Steve. As I settled in to hear the latest one, I had a feeling I was in for a treat.

Steve was her escape artist so Sue wasn’t all that surprised one morning when she looked up to see him sitting in the yard across the street. What did surprise her was the battle that ensued.

When she called for him, he totally ignored her. She had no choice but to go after him. Although he fought valiantly, Sue prevailed, capturing him and returning him to his fenced-in yard. But before she could turn her back, he was over the fence with one big boing and across the street again.

This time Sue pursued him with a vengeance, capturing him for a second time. He struggled all the harder as she carried him across the street again and into the house, with outside privileges revoked. That’ll teach ya, Cat.

As soon as the wayward feline hit the floor, he started yowling and throwing a true kitty-hissy-fit. Sue had barely gotten the words “what’s wrong with you today?” out of her mouth when into the room walked Adam and ….. yes, Steve. That’s when she realized she had just captured her neighbors’ cat. Well, oops.

When I could finally quit laughing — and yes, that took a long time — I knew there had to be a lesson in there somewhere. There was …….

How often during the Christmas season do we fight to hang on to the things that will make it the “perfect” holiday season? We HAVE to gather the family for dinners. We HAVE to buy a bushel load of presents for people. We HAVE to send cards with a long letter to family and friends. We HAVE to bake and bake and bake. We HAVE to decorate the house to the max, inside and out. And we HAVE to attend every holiday function known to man.

We spend (and waste!) so much time fighting to keep the “have-to’s” we fall into the trap of thinking they are what Christmas is all about. Without them, it just wouldn’t be Christmas.

But, just as Sue held onto the wrong cat, we often fight to hold on to the wrong things at Christmas. We think they are exactly what we want when the real Christmas is waiting patiently for us to see the truth. And when we do see Christmas in light of the truth — Christ’s birth and the beginning of His journey to the cross to save us from our sins — we find the true joy and peace of the season.

May God grant us the wisdom to know if we are hanging on to the wrong Christmas as well as the desire to seek the REAL Christmas instead!