In January 1943, German U-Boat 632 fired two torpedoes at the Coast Guard Cutter INGHAM, both of which missed, thanks to inclimate weather that day. According to INGHAM lore, she fired a depth charge at that same U-Boat, which also missed—and all sailors lived to fight another day.

Fast forward to August 1988, in Portsmouth, Virginia, at the decommissioning ceremony for the INGHAM. At the time, she was the most decorated ship in the United States fleet, and military dignitaries had gathered, along with current and former sailors, to bid the ship farewell. 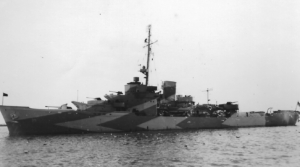 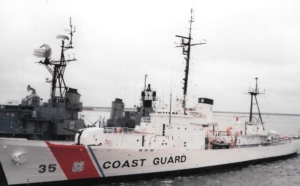 In the midst of that crowd, stood a woman who had traveled across the Atlantic to attend the ceremony. She had been found by Captain John Waters, a Lieutenant on the INGHAM in 1943, while doing research for his book Bloody Winter. Inge Karpf Molzohn was the daughter of the captain of German U-Boat 632. She had come to the decommissioning to meet the WWII sailors that were on the INGHAM on that fateful day.

My dad, who was one of those sailors, along with many others, expressed gratitude that her father had missed the INGHAM. She, in turn, thanked them for having missed the U-boat. Sadly, less than three months later in April 1943, her father had been killed when U-Boat 632 was sunk by the British Royal Navy.

This story never fails to bring tears to my eyes. Not only because it’s personal—my father’s life was on the line that day in 1943—but because it defines true forgiveness of our enemies. It isn’t easy. But true forgiveness comes from God, Who first and ultimately demonstrated it, by sending His Son Jesus to die on the cross for us.