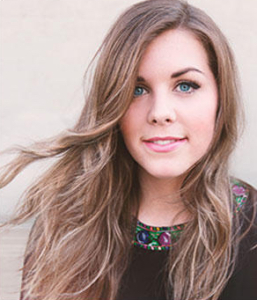 Growing up in church, her father a worship leader, Hannah Kerr has been singing since the age of five, but she never expected to make music her life. Not until late in high school, after her family had moved from Buffalo, New York to Nashville, Tennessee.

Another ‘detour’ came for Hannah when Mark Miller, Casting Crowns’ producer, approached her about producing an album on her. Casting Crowns had been the first artist she’d seen live in concert — and now God was ‘affirming her calling’ through their producer.

With the release of her new album, Overflow, Hannah’s journey continues, taking her from singing in church to major tours with some of Christian music’s most respected artists.

You’ve been singing since you were a young child. At what point did you know you wanted to make music your life?

I had been singing just as a hobby for my whole life, but decided to make it my career when I was a junior in high school. I moved to Nashville in high school and had a hard time finding where I fit in at school, so my parents encouraged me to step out of my comfort zone and try singing at church — and I’m so glad I did!

At first I was reluctant to get on a stage in front of people, but when I started leading worship I fell in love with praising the Lord and helping others do that too. I truly felt like I had found my place, and more importantly, my calling. When Mark Miller, who produces Casting Crowns and is himself an extremely successful artist, approached me about making music together I was honestly shocked. He heard me lead at church when I was seventeen and told me that he felt like the Lord was telling him that we were supposed to work together. I started praying about it and definitely felt confirmation from the Spirit that I was supposed to do music ministry as an artist, and so we started making my record.

Who are your musical heroes? How many of them have you been able to meet and/or work with?

Casting Crowns was one of the most influential bands in my life as I was growing up, and they actually were the first concert I ever went to. I’ve been mentored by Mark Hall from Crowns for about two years now, and it’s been awesome. He has really helped me understand music ministry and has continually encouraged me and helped me grow. So that’s definitely a “pinch-me” thing for me since he’s one of my all-time heroes.

I also really look up to female worship leaders like Kari Jobe and Amanda Cook from Bethel Music. I met Kari Jobe last year, and I definitely cried. It was so embarrassing! Her songs and her worship leading have been so influential in my walk with God. I couldn’t help myself.

God sometimes takes us down an unexpected path, one that blesses us even more than our original plan. Have you ever experienced such a “Divine Detour”?

Oh absolutely!! I grew up in Buffalo, NY and I thought I had my whole life planned out. I was going to go to college up there, be a teacher and live a very normal, comfortable life. Clearly you can see that God had other plans.

Like I mentioned before, my family moved to Nashville when I was in high school, and all my “plans” were completely changed. At first I didn’t understand what God was doing and I was really upset that He would call my family away from everything and everyone we loved. But as time went on and I started leading worship and eventually making music, I came to slowly realize that this was His plan all along.

He used my time in high school here in Nashville to really shape me and grow me in areas where I might not have grown if I had still lived in Buffalo. I definitely never planned on being a Christian artist and doing music for a living, but I could not be more grateful, and I feel like I’m doing exactly what God has called me to do. His plans are so much better than ours. 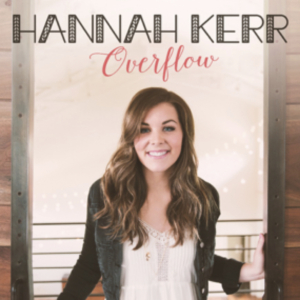 Let’s talk about your new EP, Overflow (Black River Christian, April 2017). Please tell us about it. How many of the songs did you write or co-write?

I wrote seven of the eleven songs on the album, and it was such a blessing to have the opportunity to put my heart into songs. Every song on the album is precious to me and something that God has really impressed upon me to bring to the world.

I decided to name my album Overflow because throughout the process of making my album and writing songs, I just kept asking God to fill my heart with His wisdom, grace, peace and love so that I could write songs that would allow others to feel that too. When we ask God to pour into us, He doesn’t just fill our souls until we’re full; His love is so overwhelming that when He pours Himself out on us, we are filled and then we have no other response but to allow God’s goodness to flow into the lives of the people we come into contact with.

I’m really praying that my music impacts the life of each person who listens. These songs are a glimpse into my heart and what I believe God has poured into me, so I really just hope that they resonate with the hearts and souls of others as well. I hope my album leads people to worship the King and know Him better, because at the end of the day it’s not about me at all, but truly about communicating the Gospel and the goodness of my Savior to all who will listen.

You’ve said that you feel God is using you because you’ve said “yes” to His calling. What advice would you give to those who are seeking the will of God in their lives?

Seeking God’s will for our lives is the BEST way to fulfill our callings as Christ-followers. We should always be asking God what He has for us and then doing our best to walk faithfully with Him. He doesn’t need perfect people who have it all together. He just needs people who will offer themselves to Him.

Sometimes serving God doesn’t look like singing on a stage for lots of people, sometimes it looks like sitting on the floor in your room with your guitar and pouring out your heart to the Lord by yourself. Serving God doesn’t have to be BIG, it just has to be a true offering of your heart, gifts, and talents. We have to serve faithfully wherever we’re placed, so whether that means serving in the kid’s ministry at church, making meals for the homeless, visiting people in the hospital or selling out stadiums, God can be glorified!

Whether touring or at home, what is your favorite comfort food and why?

PIZZA. I could not love pizza more. I’ve never met a piece of pizza I didn’t like. Even bad pizza is still pretty good pizza.

Love Does by Bob Goff and Daring Greatly by Brené Brown. Both are books that have challenged me to live my life more intentionality and go above and beyond to love others.

Wow, great question! I feel like at times in my life I have been all of those characters. I guess I’m leaning toward the girl next door. I’ve always been someone who loves being around people, but also loves being introverted and reading a good book alone in my room. haha. I would say I’m an approachable person, and I strive to be an authentic, humble, relatable artist and human.

YES! Dog lovers unite! I have a five-year-old dog named Baxter, and I’m not kidding when I say that he is my child. I’m a full-on dog mom and I’m not ashamed. He’s a Havanese, which is a small breed kind of like a Shih Tzu. Baxter is the funniest dog I’ve ever met. He convinces me daily that he’s really just an elderly man trapped in a dog costume, because he has a strict schedule that he holds himself to and sits in comfy chairs looking out the window and pondering life. Our family treats him like a person so he definitely believes he is one. He’s the cutest thing ever. Go on my Instagram to see one million pictures and videos of him. : )

Thank you, Hannah! It’s a pleasure to have you as a guest at DivineDetour.

Thanks for the great interview! God bless you!