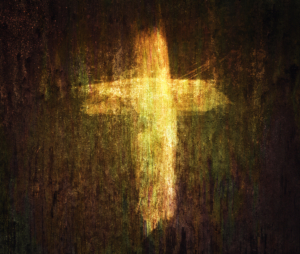 The cross… an emblem of suffering and shame, yet still a wondrous beauty to see.

… the saying that is written will come true: “Death has been swallowed up in victory.”

But thanks be to God! He gives us the victory through our Lord Jesus Christ.

I was due in court that morning, and as I often do when I am nervous, I reached for the cross hanging around my neck. I started wearing crosses as my only jewelry when God’s love finally broke through in my life a couple of years before. They remain a constant reminder of Christ’s amazing sacrifice, bringing peace to my heart, while also serving as an occasional conversation starter with others.

Historically, the cross hasn’t always been an emblem of peace. During New Testament times it was used as a cruel means of execution. Yet that was the way God chose to offer His only Son, Jesus, as the sacrifice for our sins.

Some of my favorite hymns are about the cross. Hymn writers and poets express both the ugliness and the beauty of the cross in words that may bring us to tears as we sing them. “When I Survey The Wondrous Cross” pictures the blood flowing down, mingled with sorrow and love. “The Old Rugged Cross” shows the cross as an emblem of suffering and shame, stained with Christ’s divine blood—yet still a wondrous beauty to see.

Whenever I touch my cross necklace, I am reminded that what man intended as a torturous death has become a victory—our victory—through the resurrection of our Lord and Savior Jesus Christ. May we celebrate that victory this Easter with thanksgiving and joy!

HE IS RISEN INDEED!