James L. Rubart ~ The Five Times I Met Myself 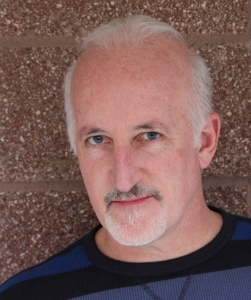 As young boy, James L. Rubart dreamed of writing novels, but he didn’t pursue his goal until later in life. After earning a B.A. in broadcast journalism from the University of Washington, he worked in radio, both on-air and in sales. For more than twenty years he has owned and operated his own marketing company.

Finally, in 2002, he started writing. Since that time, he has become the bestselling and Christy award-winning author of seven novels, including his acclaimed debut Rooms.

Now, empty nesters with two grown sons, James and his wife reside on a small lake in eastern Washington.

Without question, C.S. Lewis. He did it all. Fiction, non-fiction, children’s stories, theology … excluding people I’m friends with, he’s had the biggest influence not only on my writing, but my entire life.

Let’s talk about The Five Times I Met Myself (Thomas Nelson, November 2015). Please tell us about it.

What if you could talk to your 23-year-old self? What would you tell them that you know now, and wish you’d known back then? That’s the premise of the book and one I think everyone can relate to. Even if you’re only 23, there are probably things you’ve love to tell your fourteen-year-old self.

In the story, my main protagonist, Brock, gets the chance to talk to his younger self during a lucid dream (a dream where you’re aware you’re dreaming). When Brock wakes up, his present day circumstances have changed, based on what he told his younger self in the dream.

Brock can hardly believe it, but when it happens again, it starts to turn his world inside out. I probably shouldn’t say any more than that, but suffice it to say I love the story, and the reaction of early readers is extremely strong. 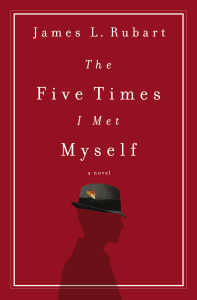 This title strikes me as one that could also be used for a non-fiction work. Is there an autobiographical nature to the story? (And speaking of titles, was this the working title from outline to final draft, or did it begin to emerge as you wrote?)

Yes! Exactly right. I’ve had a number of people wonder if it’s non-fiction. And that’s precisely what we wanted to do. We wanted people to think of stories like The Five People I Met in Heaven, so we feel the title has accomplished what we hoped it would.

The title came after the book was finished, and I have to give 99% of the credit to my team at Thomas Nelson for coming up with it. They nailed it.

Regarding the autobiographical nature of the story, again you’re extremely perceptive. There is a great deal of me in this story. In fact, I’ll tell you something I haven’t told anyone yet. The story of how Brock and his wife met is told in the novel, and it’s the exact story of how my wife Darci and I met. So yes, people who know me will recognize a lot of things taken from my own life. But there are many things that are made up as well.

You write and speak about freedom. What was the last thing you set free in your life?

Darci and I sold our house in the Seattle area and moved halfway across the state. It was time. We’re empty nesters, we had the freedom to do it, and we are absolutely loving it. (We’re four months in.) It’s a chance for a fresh start at a point in time where our lives have changed significantly. We have two outstanding sons who we love spending time with more than anything else, and yet we’re so excited about starting this new season of life together. We’re fortunate to not only still be in love with each other, but we’re still in like too. There’s no one I’d rather spend time with than Darci.

If you had to describe yourself with one word, what would it be (and why)?

Wow. One!? Passionate. That’s the way I want to live life in every moment. With passion. I want to draw the passion out of people I’m with, see them live out of their deep desires and drink deeply of life.

If you knew you couldn’t fail, what would you attempt?

I did it. The one thing I really wanted to try was to be a novelist. I was too scared for many years, and honestly, if I was dying and hadn’t tried it, would have been a massive regret. I’m not ready to die by any means, but I’m at peace now where I wasn’t for many years. It’s why I’d encourage anyone reading this that hasn’t “jumped off the cliff and built their wings on the way down” to jump. Go for it. The ONLY way you can fail in this life is to not try.

If you couldn’t write your current genre, what would you want to write?

I’d probably give romance a shot. I know, strange coming from a guy, but I love romance. Probably why every one of my novels has a romantic thread running through them.

Thanks, James! It’s always nice to have you as a guest at DivineDetour.

Fun to be here again, Kathy. Can’t believe it’s been, what, seven years since we first met? Just glad you and I stopped aging.

Admin. Note: It was at a seminar co-hosted by James (along with Literary Agent Chip MacGregor) that my idea for Divine Detour was hatched. If you have a chance to hear James speak, I highly recommend it. — Kathy Harris

To purchase The Five Times I Met Myself, log on to: