She taught at a Christian school (grammar, literature, journalism, and creative writing) for seven years before deciding to stay at home to raise her daughter. It was during that time that she began to think seriously about writing as a “profession.” Her debut novel, Freefall, released last week from Love Inspired Suspense.

Born and raised in North Carolina, Jodie now lives near the Outer Banks with her ex-military husband and their daughter.

I was sitting in a Beth Moore Bible study during my husband’s first deployment. For a long time, there had been this knowing that it was time for me to go back to work after staying home with our daughter for four years, but I didn’t have a clue what that work should be. Then there’s Beth Moore, up on that video, talking about Jesus, and I thought, “Man, she has the coolest job ever. She gets to talk about Jesus and write about Jesus.” And God hit me over the head and went, “Duh.” (Okay, not really . . . but it felt like it.)

After a false start on trying to write a Bible study, I thought about how much I’d always loved writing “stories” and decided to go for it, and God said, “Did you ever think there might be a reason you like to write fiction? Maybe because I want you to?” Uhm, duh.

YES. More than once. It’s tough to pick just one, but let’s go with college. I had my heart set on Agnes Scott near Atlanta. I had a close to full ride scholarship had moved stuff down there, and then I got sick. Very sick. And I missed a semester of college and had to give up the scholarship. I wound up in school in my hometown, which felt like failure until God finally opened my eyes. I would not trade that for a second. I made amazing friends. I had incredible professors, including one whom I fully believe is the greatest literature professor in the entire country. And best of all, I met my husband. What started out as a total disaster wound up being one of the greatest blessings of my life.

I try to remember always that this is about Him, whether He is named in the scene I’m writing or not. When it comes to what I actually put on the page, I like to write about people who have struggled, who have fallen and failed and now they are confronted with grace. I will never forget the worst thing I ever did. And I will also never forget how God forgave me or how He turned that thing around and totally used it not only for His glory but to restore me in ways I never dreamed. That’s what I want people to see, that He is so much more love and grace than we can imagine. He is just this over the top God who totally blows it all out of the water. 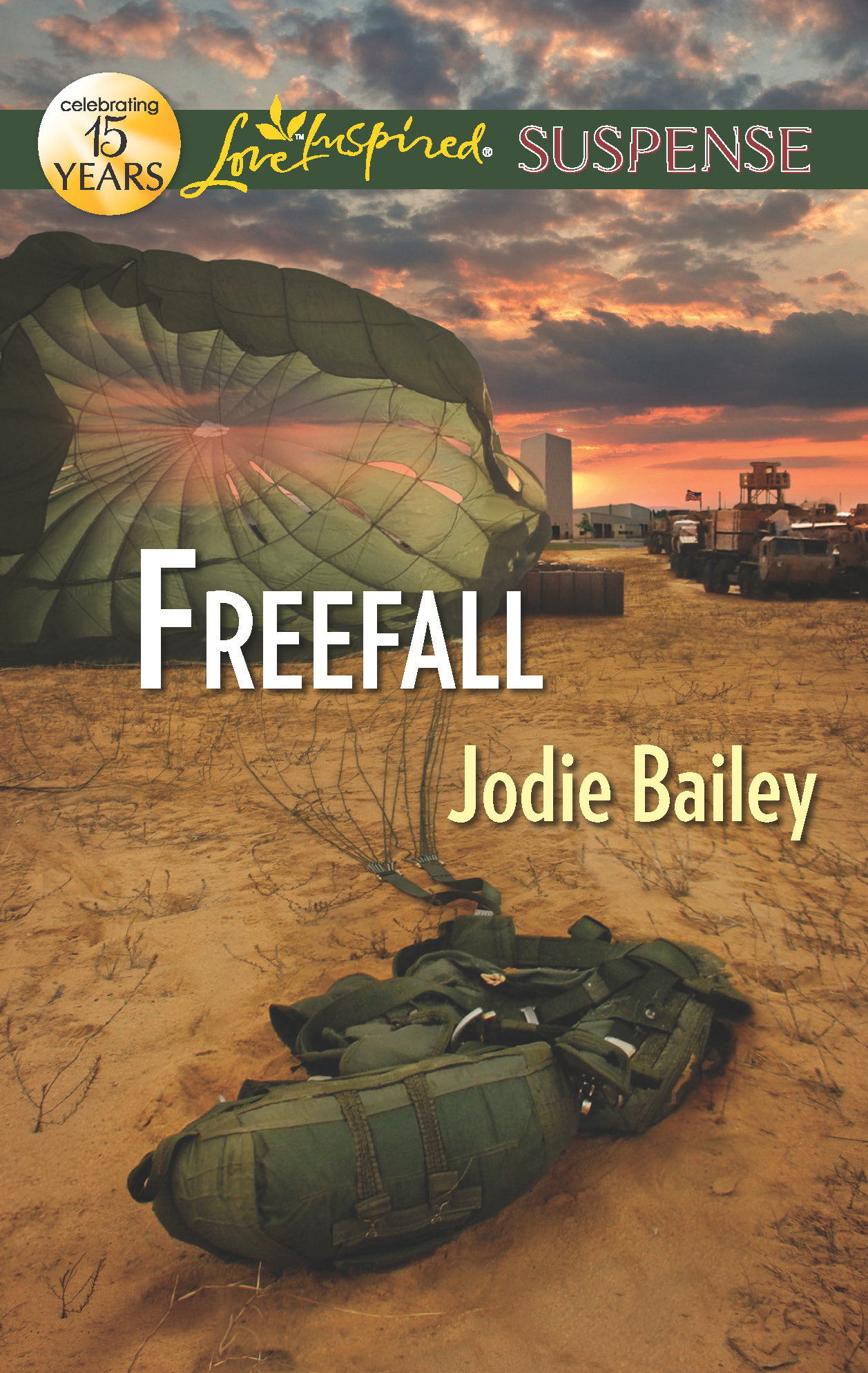 Let’s talk about your new book, Freefall (Love Inspired, October 2012). Please tell us about it.

Cassidy Matthews is the Division Parachute Officer for the 82nd Airborne. On the day a vehicle blows up in the parking lot of her building on post, her ex-husband Shane Logan shows up and tells her someone is running drugs into the country through her unit . . . and they are trying to set her up for it. Cassy has to find the smuggler in order to save her own life, but she also has to deal with the feelings she didn’t know she still had for the man who she believes betrayed her.

A random comment by my agent. She said, “Hey, I’ve got a publisher looking for a military suspense. You ever thought of doing that?” I said NO. And then I got a vision of a scene that wouldn’t go away, so I wrote it down. And another followed. And another. My husband was preparing to deploy at the time, and getting to talk about a plot with him was really a fun thing to do and a great distraction from that.

I learned that writing is hard. All my life, it’s just flowed. I’ve never struggled with a story, but this one nearly killed me. I learned that my husband really is half of me, and when he deployed, I lost the will to write. I had to drag words out one by one. AND I learned to ask for help. Because when I finally confessed I was stuck to my CWG mentor, she put me in immediate touch with someone who said exactly what I needed to hear. God was waiting for me to swallow my pride and say, “Help!”

What are you working on now?

Well, when I finished Freefall, I told my agent I was done with suspense. Finished. Forever. And then I wrote a second one, because I got this one scene vision again. And now a third. This one is about a researcher who is working on a psychological bioweapon, but someone is using her own knowledge against her. She has to fight her father’s legacy of fear and learn to trust the man who her father sent to rescue her before he died. 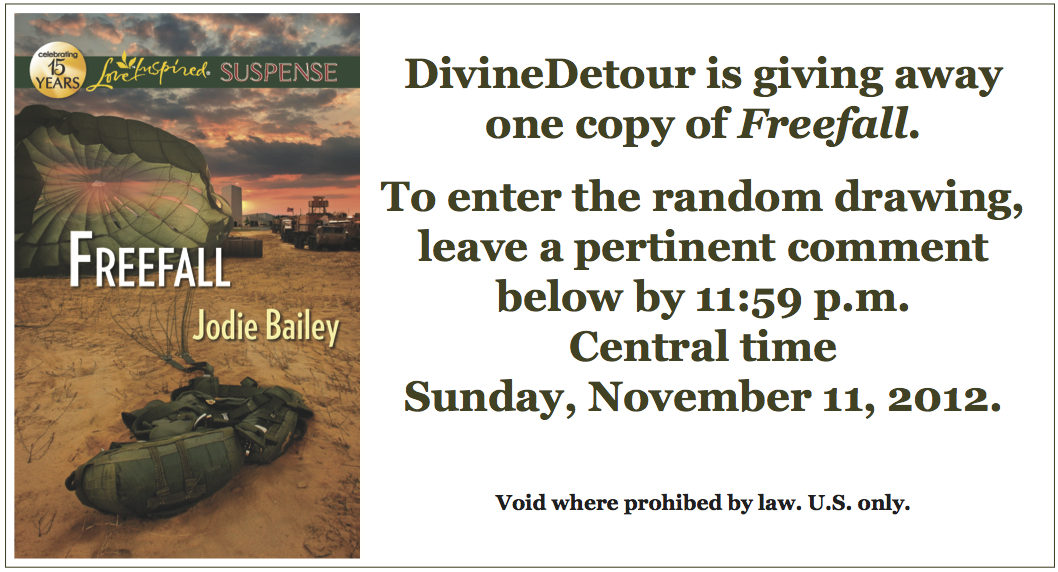 Okay, I’m a freak. I love Doritos and M&Ms and Mountain Dew. Together. I’m a simple person, and that makes me perfectly happy. As for comfort food meal, it varies. Right now, I’d say pizza, but I’m a for sure steak and baked potato kinda girl.

Other than having the totally useless talent of being able to name every song on the radio, artist and title, no. My grandmother tried to tell me I’d regret giving up piano lessons. She was right.

Okay, remember the later Beatles songs, where you could literally tell which sections John wrote—because they were all serious and somber—and which ones Paul wrote—because they were all fun and bouncy? That would be me. Think like “A Day in the Life” off Sergeant Pepper. I’m a breezy Colbie Caillat song and a low key Norah Jones all at the same time. Give me five seconds. It will change.

Oh wow. I’m Rapunzel in Tangled. Terrified at the start. (Fear played way too big of a role in my early life.) Then God got a hold of me and now I can’t believe who I am and the things I’ve done with him navigating the journey.

We have a fabulous Siberian Husky that we got from a shelter. He is the best dog ever. We saw him at PetSmart one Saturday when we weren’t even planning on getting a dog. He “talked” to me when I walked by his cage, and my husband had to force me away. A week later, we went to the shelter, certain he’d be gone, and there he was. He’s the most obedient thing, and he thinks he’s a lap dog. And honey, if you’re eating a banana, he will literally walk backwards in front of you begging for a bite. We’ve had a lot of dogs, and he’s literally the most pleasant and precious one.

Thanks, Jodie! It’s great to have you as a guest at DivineDetour.

I’ve had a blast, Kathy. Thanks for having me here! You’ll have to come visit me over at the blog to talk about your book, too.  : )

To purchase Freefall logon to: