Kay Marshall Strom is a traveler. She’s trekked through India, China, Indonesia, Cambodia, Sudan, Senegal, Morocco, Tunisia, and Egypt with one mission: to gather stories and broadcast them to the rest of the world. She decided a number of years ago that she wanted to make a difference in the world—to help abolish slavery of all kinds—and she works through her writing.

Kay’s writing credits include thirty-nine published books, numerous magazine articles, short stories, devotions, curriculum, television scripts, and two prize-winning screenplays. She is a sought-after speaker at seminars, retreats, and special events throughout the U.S. and around the world.

She and her husband, Dan, make their home in Santa Barbara, California.

Nine years ago, while I was in West Africa working on another project, I toured an old slave fortress and was struck dumb by the sight of a set of baby-sized manacles bolted to the wall. All I could think was, “What could ever make human beings think this is okay?” As I became more aware of the enormity of slavery today (at least four times as many people are enslaved now than in the days of the African slave trade!), I had to look at home—Americans. Canadians. Europeans. The unthinkable is us.

Oh, yes. Our house burned to the ground the same year my first husband was diagnosed with a horrifying, terminal condition. When he died eight years later, he had the mind of a three-year-old. I had been writing for years, and during his illness, I supported our family by taking any and every writing project I could find. After he died, I took a long, hard look at how I was spending my days. I determined that from then on, I wanted my writing to make a difference.

Let’s talk about your new book, The Love of Divena (Abingdon Press, August 2012), Book 3 of your Blessings in India trilogy. Please tell us about it.

A little girl, abandoned by her father on the doorstep of her desperately poor grandmother—Shridula, heroine of book 2—brings to a conclusion the generations-long saga of an Untouchable family and the high caste Christian family that owns them. Set in rural India, 1990, we see how India has changed over the generations and, even more, how it has not: 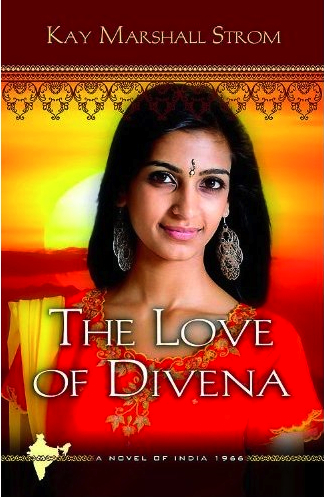 Shridula, old and stooped at fifty-nine, made her painful way to pay homage to the elephant god Ganesh, lord of success and destroyer of evils.

“Why are we Hindus instead of Christians?” her seventeen-year-old granddaughter Divena asked.

“Because we are Indians,” Shridula said.

“It makes no sense,” insisted Divena. “They tell us Untouchables are not fit to go into the temple, but we still have to give sacrifices to the gods and goddesses. The holy scriptures of the Veda say we are foul and loathsome, and must stay apart, yet we are not allowed to read those scriptures. I do not want to be a Hindu.”

“Neither do I,” said Shridula. “But we are Indian. We have no choice.”

Divena doesn’t agree. She makes a choice, one that rocks the world of both families and shakes the foundation of an entire culture.

What sparked the idea for the series?

I first went to India to research a non-fiction book telling the stories of women who live and serve Christ in the world’s hardest places. That’s where I first learned that India, with its generations-long bonded servitude, is a major cause of modern day slavery—especially among the Dalits, previously known as Untouchables. Several years ago I had the opportunity to travel through Ireland with the advance team for the movie Amazing Grace. On the last day of our time together, a team member from India asked me, “Why don’t you write about my people? We need someone to show the world how oppressed and beaten down we are. Why don’t you write about us?” And I did.

Oh, my, that is so true! One of the things reinforced to me is that “religious” doesn’t mean Christian. India is an extremely religious country. Mostly, it’s Hindu, a religion of endless gods, and of fear, uncertainly, and prejudice. All this is deeply engrained in Indian society. But here is the most important thing I’ve learned: God’s Word is infinitely powerful! We in this country don’t see that so often. Too many of us take biblical truths and promises for granted. Oh, but what a life-changing blessing the Bible is to Indians!

Earlier this year you released a biography of John Newton, Once Blind: The Life of John Newton (InterVarsity Press, January 2012).  What was the catalyst for that project?

I love the hymn Amazing Grace, and I love this story of the man who lived the wretchedness and embraced the grace. Oh, and who also wrote the hymn!

“Every generation seems to have people who make a habit of embodying evil,” John Newton wrote, “people who have to look up in order to see the bottom. When they come to know God they serve as irrefutable examples of His amazing grace. I was one of these.”

Actually, this book is a reprint of one I did five years ago. I am excited about it’s new release through InterVarsity Press, because it is such a powerful story, and the perfect one for a 21st century abolitionist!

When the words aren’t flowing—or when you want to celebrate if they are—what is your favorite comfort food and why? You’ve traveled to many parts of the world. Do you have a favorite international food?

Always, always, my favorite comfort food is dark chocolate. You cannot believe how excited I was to first discover its great health benefits! Ymmmm! I enjoy international foods from most anywhere, but whenever I’m out of the country for awhile, I have a craving for a tuna salad sandwich. One time, after being in India for a month, on a stop-over in Bankok, I ran through the airport desperately searching for tuna. I finally found it—a French place tucked back in a corner that sold tuna salad on croissants. My hand actually shook when I reached for it! How pitiful is that?

Alas, no. I do make a joyful noise, but I’m afraid the joy doesn’t extend beyond myself.

A ballad. I am first and foremost a storyteller, after all.

I think I would have to say minor. My subject is slavery. It’s somber. Pensive.

I am the strong female lead, just like my own female leads. We have to be strong. We face such difficulties, and so much depends on us.

I have two wonderful cats, Owen (named after the main character in A Prayer for Owen Meany) and Twinkle the Star That Came Down From Heaven Marshall Strom Kline, called Twinkie, named after the cat I had as a child who walked home to South San Francisco from Marin County. Yep, across the Golden Gate Bridge. Amazing, eh?

Thanks, Kay! It’s a pleasure to have you as a guest at DivineDetour.

Thank you! It was so nice to be with you.

For more information about Kay, logon to her website at http://www.kaystrom.com/.

To purchase The Love of Divena and other books by Kay, logon to: