Keli Gwyn earned her bachelor’s degree in Mass Communication/Print Journalism from California State University East Bay and worked as a copyeditor for a small textbook publisher. She’s an award-winning novelist, including a double finalist in the Romance Writers of America Golden Heart contest, and enjoys transporting readers to the 1800’s far western U.S. Keli’s stories are inhabited by colorful characters with a touch of humor.

In real life, she, her husband, Carl, and their daughter, Audrey, live in the Heart of the California Gold Country at the foot of the Sierra Nevada Mountains.

What sparked your writing journey in 2006?

I’d dreamed of being a writer since I was seven, but I didn’t embark on my writing journey until forty years later. Our daughter was in high school at the time. Realizing that she’d be leaving for college in a few short years, I knew it was time to figure out what I was going to do with myself once I became an empty nester. I contacted a friend who is a life coach. She helped me see that it was time to resurrect my dream of being a published author. I began writing my first story a few weeks later.

My faith is an integral part of who I am, so I want to include it in my stories. Because I want my books to appeal to Christians as well as to those who might not have professed the Lord as Savior, I work to make the faith element a natural part of the story. I tell my non-Christian friends that the spiritual aspects of the story are there but that I’m not gonna bash them over the head with a Bible, so to speak. I like to think the Lord can use the spiritual themes in my stories to draw readers who don’t have a personal relationship to Him. 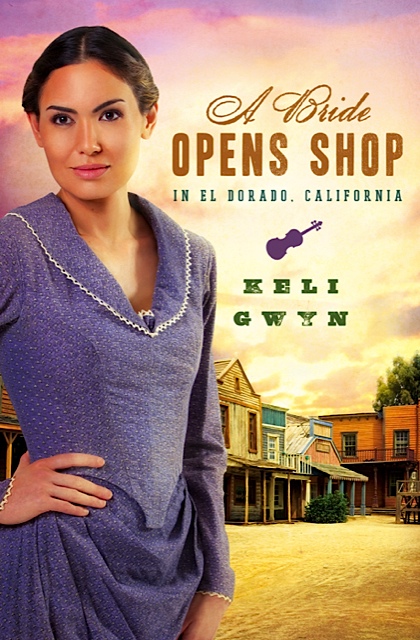 Let’s talk about your debut book, A Bride Opens Shop in El Dorado, California (Barbour Publishing, July 2012). Please tell us about it!

An ever-resourceful widow, Elenora Watkins arrives in El Dorado ready to go into partnership with Miles Rutledge. When he refuses, Elenora becomes the competition across the street. Is this town big enough for the two of them?

Miles can’t help but stick his well-polished boot in his mouth whenever he comes face-to-face with Elenora. Can he find a way to win her heart while destroying her business?

Miles’s mother, Maude, is bent on Elenora becoming her new daughter-in-law while Elenora’s daughter, Tildy, thinks Miles would make a perfect papa. How far will these meddlers go to unite this enterprising pair?

I live in the heart of California’s Gold Country and wanted to bring one of the area’s historic towns to life. El Dorado is located just a few miles away from my town of Placerville. In researching El Dorado I learned about a successful mercantile owner with the largest business in town. He was active in the community and well regarded. He became the model for my hero, Miles Rutledge.

One of Placerville’s historic sites is the Emigrant Jane building. Built in 1861, it’s still standing today. The building bears a plaque telling about Jane, an industrious woman who drove a wagon across the country, had her store built, and went into business. I did my research and learned that women were able to own businesses in California from the early days of the Golden State. That knowledge led to the idea of having Elenora open her own shop when Miles refuses to accept her as partner in his.

I might be stretching the word “recent,” but the last real detour I encountered took place soon after my agent offered me representation back in December 2009. When Rachelle called to finalize her offer, she mentioned that my story had some problems, but she didn’t say what they were. Rather than stew about what those changes might be, my critique partner suggested I write a Worst Case Scenario List with anything and everything I thought might need work, which I did.

Six weeks later Rachelle called, and I learned that my list hadn’t been big or bold enough. She said I’d released the tension in my story at the one-quarter mark and needed to delete the final 75,000 words of the story and start over. I was shocked, but a light bulb went on, and I knew she was right.

I embarked on the rewrite and ended up with a far better story than I’d had before. That detour was unexpected but proved beneficial. I learned the value of heeding wise counsel and how important it is to be flexible in this business. The good news is that Rachelle sold that story, which is now called A Bride Opens Shop in El Dorado, California.

I’m a Taco Bell addict. A seven-layer burrito or tostada can serve as creativity fuel or a celebratory feast.

I have a real appreciation for musicians, but I’m not one myself. My husband and daughter have all the musical talent in our family. I enjoy listening to my guy play his guitar, banjo, or clarinet. Our daughter loves to sing, and I delight in hearing her belting out tunes. Her joy is contagious.

I would be a peppy praise song, one with a nice beat that lifts peoples’ spirits and gets them moving to the beat.

I like to think I’m strong. My husband and parents tell me I am. However, there are days this newbie author feels like a little girl doing a wobbly walk in high heels.

I had a doxie when I was growing up and loved that guy so much. My husband is a cat person, though, and I’ll admit to being a cat person convert. We have two longhaired orange and white cat brothers who keep us entertained. I tend to wear their fur everywhere, though. My motto is: Have lint roller; will travel.

Thanks, Keli! It’s great to have you as a guest at DivineDetour.

Thanks so much for having me, Kathy. Spending time with you and your blog’s visitors is a treat. I’d like to end by asking you one of the great questions Kathy asked me: If you were a song, what kind of song would you be?

For more information about Keli, visit her website at http://keligwyn.com/.

To purchase A Bride Opens Shop in El Dorado, California logon to: