Little Boy, the Movie ~ A Must See 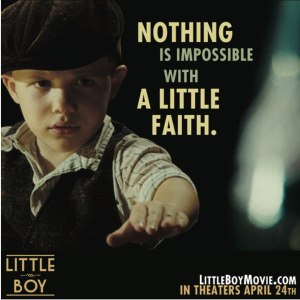 I had the opportunity recently to attend a pre-release showing of Little Boy, which hits major theaters across the U.S. this weekend. Little Boy was written and directed by Alejandro Monteverde, who was also behind the critically-acclaimed Bella, winner of the People’s Choice Award at the Toronto International Film Festival in 2006.

Monteverde, who spoke at the Nashville premier, told the audience that Little Boy was a five-year labor of love. In my opinion, he, along with producers Mark Burnett, Roma Downey, and Eduardo Verastegui, have produced an Oscar-worthy film. The cinematography is stunning, the story is uplifting, and Jakob Salvati, who was cast in the title role, knocks it out of the park.

After viewing the trailer I didn’t know what to expect from Little Boy, but the film far-exceeded any possible expectations. If you’re like me, and an entire audience of premier guests, you should expect to be emotionally moved by this 1 hour, 46 minute look into one boy’s test of faith during our country’s 1940s World War II era. I dare say you’ll also walk away with a better expectation of yourself.