Meg Moseley has worked a variety of jobs, from candle making to administrative assistant at a Christian college, but writing has long been her passion. Her debut novel, When Sparrows Fall (Multnomah Books), released on May 3.

Growing up in California, Meg moved to Michigan, and then finally settled in Georgia near the foothills of the Southern Appalachians, where she enjoys motorcycle rides in the mountains with her husband. While sitting on the back of his bike, she prays, takes in beautiful scenery, and plots her novels. She is a former homeschooling mom to their three children, the youngest of whom graduated from high school two years ago.

You’ve had several different careers. What sparked your writing journey?

Since I was small, I knew I wanted to be a writer like my grandmother, who helped keep food on the table through the Great Depression by selling her writing. I dabbled in poetry, short stories, and short nonfiction pieces for years, but I didn’t start writing novels until my kids were old enough to function without me while I disappeared into my fictional worlds for hours at a time.

How did you go about learning the craft of writing?

I joined local writers’ groups, found good critique partners, went to writers’ conferences, read dozens of how-to-write books, and read hundreds of novels. And I wrote. My first half-dozen novels will never see the light of day, but they weren’t a waste of time. The process of writing is an education in itself, and I don’t regret any of those early attempts.

Have you had any special mentors along the way?

I certainly have. My first mentor was Sherrie Lord, who responded when I emailed to say I loved her novels. She was kind enough to critique some of my early work. Since then, we’ve become great friends and critique buddies. Deeanne Gist is another special mentor. We connected through a writers’ forum online, and she has taught me so, so much about writing and about the business. Cindy Woodsmall has also shared her hard-gained wisdom with me, and of course I’m indebted to my agent and my editors who’ve taught me so much.

Yes, too many to list. One of them was our move to Georgia when my husband’s job was going to be phased out. We went from rural isolation in Michigan to the hustle and bustle of metro Atlanta. Within a short time I’d found my first writers’ group and a stint as a community columnist for a suburban section of the Journal-Constitution. Of course I still could have pursued writing fiction if we’d stayed in a tiny town, but it’s easier to make connections in a city.

Writing is part of my worship. As imperfect as it is, my writing is an offering that I place on the altar of God. Even when I write something that doesn’t have an explicitly Christian message, I write as a Christian. 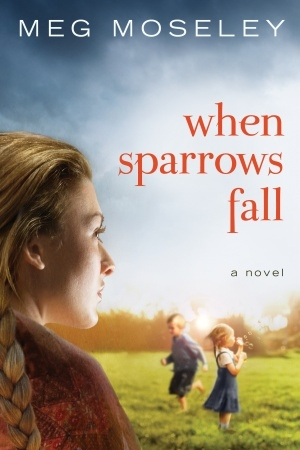 Let’s talk about your new book, When Sparrows Fall (Multnomah Books, May 3, 2011). Please tell us about it.

When Sparrows Fall is the story of an isolated homeschooling widow who’s desperate to break free from a cultic and patriarchal group. Her sidekick is an outspoken professor who helps in her hour of need but challenges her choices at every turn. If anyone would like to read the first chapter or two, an excerpt is posted at the WaterBrook Multnomah site. (Click the book cover at right to view.)

I hope readers will take away a fresh look at the grace of God. Christianity shouldn’t be about formulas and rules that would lead us away from what Michael Spencer in his book Mere Churchianity calls “Gospel honesty.” All the rules in the world can’t help a sinner, but Jesus can and will. It’s that simple.

Chocolate, preferably accompanied by a cup of coffee, black. My current favorite is the Cinnabon Cinnamon Mousse Pecan Cluster. I wouldn’t have thought of combining chocolate and cinnamon, but it’s a luxurious combination.

I was a teenager during the height of the Jesus Movement in California, so guitar-playing and songwriting were de rigueur. Sometimes I relive the excruciating memory of singing one of my own songs at a coffee house and forgetting the lyrics.

Hmm…maybe an Irish tune that can’t decide if it wants to be melancholy or happy.

Major. Most of the time, anyway.

The girl next door. Barefoot, in jeans and T-shirt, reluctant to get dressed up to go anywhere.

I love dogs too, as long as they belong to other people. I grew up with cats. Our household currently has two, a brother and sister named Hobbes and Priscilla. Hobbes is short-haired and cantankerous. Priscilla is long-haired and clingy.

Thank you, Meg! It’s so nice to have you at DivineDetour!

Thanks for having me!

For more information about Meg, visit her website at http://www.megmoseley.com/ or her blog at http://megmoseley.wordpress.com/.

To purchase When Sparrows Fall logon to: