A graduate of the University of Notre Dame, Michele Chynoweth initially pursued journalism, advertising, and marketing. She is the recipient of several writing awards. Her debut novel, The Faithful One, which is a modern-day story based on the Biblical Book of Job, released in March of last year. Her most recent release is entitled The Peace Maker.

Michele resides in Maryland with her husband and five children.

You have a background in journalism and advertising. What sparked your fiction journey?

I have always wanted to write novels—when I was ten I wrote one in a notebook (a story about a girl and her dog!). But somewhere along the way I thought I should make a “career” of my writing and I liked working on my high school and college newspapers and decided to become a reporter. I worked my way up from small newspapers to bigger ones—until I wanted to be more “creative” and took a job as an ad copywriter and eventually ran my own ad agency. It turned out I missed writing novels, and about fourteen years ago the pain got great enough that I started to do it on the side—and realized this is what I really love to do and I’m meant to do.

When I started writing that first novel several years ago I was writing for fame, recognition, and money (none of which has really materialized yet!). I wanted to write the next great American novel. But I got the idea from God to write a modern-day story based on the Bible’s Book of Job (which became my first published book, The Faithful One.) And in writing it, I realized I was fulfilling God’s will for me—to write modern-day Bible stories. I now try to call on the Holy Spirit to work through me when I write, and have faith that if I do my best, God will take care of the outcome. 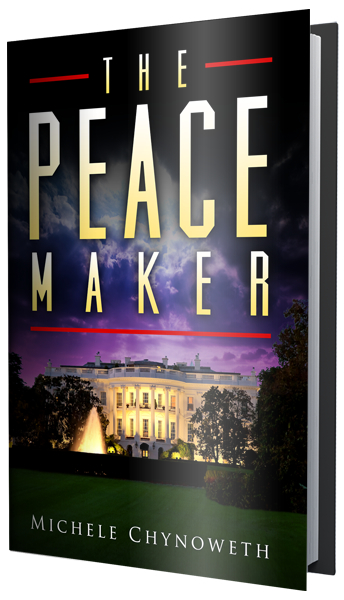 Let’s talk about The Peace Maker (Ellechor Publishing House, November 2012). Please tell us about it.

After I wrote and published The Faithful One and realized I had found my niche, a friend of mine suggested I write a modern-day story based on Abigail in the Bible. I said, “who’s that?” But when I read her story (in Samuel 1) I realized I could relate to it—just like I did to Job in my first novel. I too had been married to a narcissistic and abusive alcoholic (like Abigail’s first husband Nabal.) She eventually meets David and risks everything to help save his soul and his Kingship—and I admired her courage. I based it on a future presidential election (in which Kentucky Governor Leif Mitchell (David) runs against his adversary, U.S. Senator Darren Richards (Nabal), and Chessa Richards (Abigail) is put in the middle and faces some tough choices.

What do you hope readers will take away from the story?

I hope the story helps the reader take a look at his or her own life and ask, “what is God asking of me?”—and discern God’s will and plan, even if it might mean making tough choices, taking big risks, or going through painful changes. I also raised some real issues that face American voters today—such as the “right to life” versus the “right to choose,” domestic violence, alcoholism, and human egg trafficking—and to discern God’s will for us when it comes to those as well. I believe readers will walk away having learned something—about today’s politics and about their own faith and beliefs.

I have had several “detours” in my life! They were all not planned by me but, as I can see looking back now, designed by my Creator. But each one left my life richer and fuller for having experienced them. One was getting sober and into recovery. One was losing my business of twenty years (which is now opening the door wider to becoming a novelist). One was getting divorced. And the most recent was getting re-married to a wonderful man and experiencing the challenges of a blended family of five kids—ages fourteen to twenty-two! Like my characters (Seth Jacobs, or Job, and Chessa Richards, or Abigail) I have been through some challenging plot twists—but have grown because of them!

No—but my sons do. They’ve been in a punk rock band together—one’s a drummer, one a bass guitarist—for the past eight years and they’re really good. Don’t know where they get it from! (I love to sing but am not really good at—although I did sing Day By Day in a local production of Godspell about ten years ago!)

I’m also a dog lover and have had dogs my whole life. Also love horses!

Thanks, Michele. It’s nice to have you as a guest at DivineDetour.

To purchase The Peace Maker logon to: