Jeanette Windle is an award-winning author and journalist who grew up in the rural villages, jungles, and mountains of Columbia. Her books have been nominated for the ECPA Christian Book Award, the Golden Scroll Novel of the Year, a Christy Award, and an ACFW Carol, among other honors. Jeanette is also the editor of BCM World magazine and has served as Vice-President of the South Florida Writers Association.

She and her husband, Marty, now live in Lancaster, Pennsylvania. They are the parents of four children.

If there is one interview question I receive frequently, it is why write about such controversial subjects as the international counternarcotics war, Marxist guerrillas in Latin America, the Islamic fundamentalist threat south of our borders or Afghanistan, the cry of the oppressed in hostile nations. The answer is actually simple. We as writers are told to “write what we know.” I write about the world I know, a world well outside of safe American borders. After growing up in Latin America’s guerrilla zones, I spent sixteen years with my husband as missionaries in Bolivia, one of the world’s top-five most corrupt countries, where I had the dubious privilege of watching from the front-row the development of a ‘narco-democracy’ which birthed my first adult international intrigue novel, CrossFire.

From there we were called to mission leadership with a ministry that serves in more than fifty countries on five continents. As result, I have now lived in six countries and traveled in more than thirty, including such difficult corners of the planet as Afghanistan, India, Sri Lanka. Those places and people and the spiritual lessons God has taught me along the journey have spilled over to become the settings and themes of my books.

Actually the biggest “detour” I remember, at the time a horribly distressing setback, was finally breaking into print with my first juvenile mystery series (a God-story in itself), only to have that publisher’s juvenile fiction department close down, effectively stranding my own series as well as those of a number of other authors. I was left back at square one as far as publishing. But that frustration ended up giving me the time gap and encouragement to write my first adult suspense novel, CrossFire, set in the counter-narcotics war in Bolivia where I was then living. I might still be churning out only children’s series were it not for that life interruption. And that series did end up coming out with Kregel Publications as The Parker Twins Series.

I am a follower of Jesus Christ, and I cannot write without that worldview permeating every thought, plot line, character. I do not even understand how Christians can write a book that does not ‘leak’ their faith and outlook on this universe. For me personally, writing has always been a call to share my faith in such a creative and interesting fashion that readers who would not necessarily even set foot in church would be drawn in to the world I have created and the God who is there. My ultimate goal in every book I write, however much a “thriller,” is to share with the reader my own heartfelt conviction that, for all the turmoil and conflict and pain in our world, this universe does make sense and has both a purpose and a loving Creator. 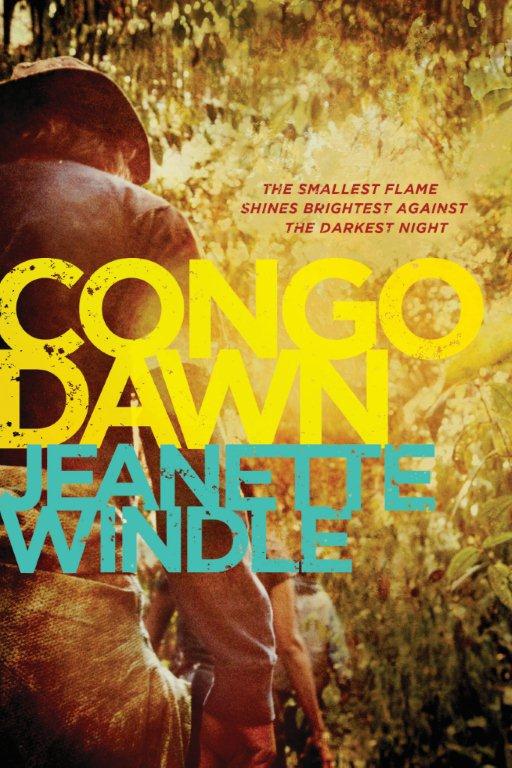 Let’s talk about your new book, Congo Dawn (Tyndale House, February 2013). Please tell us about it.

My latest Tyndale House release Congo Dawn takes place against the backdrop of the Democratic Republic of Congo’s Ituri rainforest war zones. Why this particular setting?

Growing up in the world’s largest rainforest, the Amazon, I was captivated by missionary biographies from its second-largest African counterpart, the Congo. Among them the story of Dr. Helen Roseveare, who helped establish several mission hospitals and medical training centers in the Ituri rainforest despite violence and unrest of impending Congolese independence, herself held captive for five months during the 1964 Simba rebellion. The largest of those centers Nyankunde was in turned razed in 2002 during the continuing conflict that has taken more than five million Congolese lives in the last decade. Today’s fighting is greatly aggravated by the value and pursuit of conflict minerals in that zone.

As always, it has been the mission pilots, medical personnel both expatriate and Congolese, and other followers of Yesu, Jesus Christ, who have been first back into the conflict zones well ahead of United Nations, embassy, local law enforcement or any other humanitarian and corporate interests. Their courage in shining bright the light of Yesu’s love in one of the planet’s darkest corners gave voice to this story.

As to Congo Dawn‘s actual suspense thread, I’ve had personal opportunity to witness what a multinational corporation is capable of in back alleys of the Third World when no one is watching (an experience in itself too unbelievable to write up as fiction). In Africa as elsewhere, both the protective and striking arm of such corporations has historically hired foreign mercenaries. But today’s private military corporations are vastly different, possessing more fire power than the average country. What struck me was the lack of any accountability to outside oversight beyond some paid-off local warlord.

So what happens when a multinational corporation with unlimited funds hires on a private military company with unbridled power in a Congolese rainforest where the ultimate conflict mineral is up for grabs? Coming up with one very plausible possibility birthed Congo Dawn.

Each of my novels is birthed from the particular point along my own spiritual journey at which the book is written, so that the spiritual truths with which the protagonists are wrestling are also the lessons God has been teaching me. Most recently, the height and breadth and depth of God’s love despite all seeming evidence to the contrary of this planet’s darkness and suffering.

In my upcoming Tyndale House release, Congo Dawn, the protagonist asks a question:

“I would give my own life to stop the pain I’ve seen. To stop little girls and boys from being raped. Or just as bad, forced into armies where they’re turned into killers. To keep families from being torn apart by war. Children dying of preventable diseases for lack of a dollar’s worth of medicine. So am I more compassionate than the God who created all these people, created all this beauty? How can an all-powerful God who claims to love humanity look down on our planet and watch such unspeakable things happening, innocent people hurting and dying, bad guys winning over and over again, so much suffering, without it breaking his heart? Without reaching down and putting a stop to it?”

Coming to grips with that question in my own life as well as that of my fiction protagonist has led inexorably to a very simple realization. I am not more compassionate than my Creator. Any love I can possibly feel or show is a dim reflection of our heavenly Father’s love.

So if I begin with the recognition that God is truly love, that He loves us far more than we can love others, then I must also accept (whether or not I will ever fully understand it this side of Heaven) that the coexistence of a loving Creator with human suffering is no oxymoron, but a divine paradox those refined in the fires of adversity are best equipped to understand. However dark the night, our heavenly Father really does know what He’s doing. His ultimate plans for our lives and for all His creation are not only birthed from immeasurable love, but they will not be thwarted.

One consequence of living and traveling across five continents is that I really can’t nail down food favorites to one—or even one particular cuisine. But when my adult kids come home, a few of the comfort foods everyone clamors for Mom to prepare are arepas, empanadas, cuñapés. And if you want to know how delicious those are, try Google!

As a teenager, my daydream for the future included the possibility of being a concert pianist, as my mother was before giving it up for the mission field. We had only a couple elder pianos at our missionary kid boarding school, but I practiced Rachmaninoff, Sinding’s Rustle of Spring, etc. any time I could grab piano time. In time, I too headed off to the mission field where I had no piano available for many years. I now am privileged to have access again, but have had to make the decision time-wise to focus on piano or writing. Writing won out, but I still have hopes one day of doing justice again to pieces I found simple in high school.

A slightly-dated, but never out-of-date Bill Gaither contemporary (Because He Lives springs to mind) with a strong counterpoint of Latin samba.

Definitely the little girl trying to walk in high heels. I still feel often enough a little girl inside trying to measure up to adult expectations, perhaps the inevitable consequence of humans having to attain maturity these days within their first century instead of having a millennium or so as Methuselah and his counterparts enjoyed (hmm, I’ve a thought for a suspense plot there!).

I hate to say it, but as a child, my main memory of pets is that they died. I say so because we lived in the tropical rainforest, which was very hard on dogs and cats. I remember a number of times our family getting a new puppy on vacation, then heading back to boarding school, to discover it had succumbed to parvo or other dog diseases before our next visit home. Only one tough-as-nails mutt that looked just like the TV Benji dog lasted several of my teen years, though we weren’t home often enough to bond.

When we in turn went to the mission field, dogs were outdoor guard animals. The result was that even with my own children’s pets (dog, cat, parrot, tortoise), I have always remained rather detached emotionally—until this last year or so when we became empty nesters and acquired an adorable black cockapoo puppy (named appropriately “Pookie”). I will admit she’s melted my heart and become the spoiled baby of the household.

Thank you, Jeanette! It’s a pleasure to have you as a guest at DivineDetour.

For more information about Jeanette, visit her website at www.jeanettewindle.com.

To purchase Congo Dawn logon to: