Ryan Steck is an editor, an author, and the founder and editor-in-chief of The Real Book Spy. Ryan has been named an “Online Influencer” by Amazon and is a regular columnist at CrimeReads. His website, The Real Book Spy, has been endorsed by #1 New York Times bestselling authors Mark Greaney, C. J. Box, Kyle Mills, Daniel Silva, Brad Thor, and many others.

A resident of Michigan, along with his wife and their six kids, Steck cheers on his beloved Detroit Tigers and Lions during the rare moments when he’s not reading or talking about books on social media.

Now keep in mind that if someone else was asked what one word best described me, you might get a lot of different answers. Ha!

I’m a big believer that in life nothing is ever given—everything is earned—and that, for the most part, you’ll get out of it what you put into it. There are exceptions, certainly, and unforeseen circumstances that are sometimes far outside of our control. As a father, though, with six kids, I firmly believe that we should worry only about those things within our control and work hard to succeed at whatever we’re doing. My family, including my wife and kids, drive me each day to not only work hard, but to be the best version of myself that I possibly can.

When did you first know that words, i.e. reading and writing, would play such an important role in your life?

I’ve always loved stories in general, from movies to books to the ones told round campfires. Moreover, I’ve always loved telling stories, and I think I realized fairly early in life that words—and even just expanding my vocabulary by learning new ones—gave me more ammunition when telling my own stories or adventures. Later in life, as an adult, I really fell in love with the thriller genre, primarily Vince Flynn’s Mitch Rapp series, and knew then I wanted to do something that involved books. In 2014 I launched The Real Book Spy, a website dedicated to all things thriller.

This is so true! Okay, so for me, it’s crazy to look back to my high school days, because I actually created Matthew Redd, the hero in my debut novel, Fields of Fire, in tenth grade. There was an intern who gave us a writing assignment, and she told the class that we could write anything we wanted. She said we could use violence, language, whatever we felt necessary to adequately tell the story we were about to create. So I went home and, like most teenagers, took that freedom way too far. I turned in a short story about a teenage vigilante named Matty Redd that was so action-packed and filled with over-the-top language and whatnot, that I was suspended from school for a week.

The thing is, though, Redd never left me. And all these years later, when I was an adult and thought about how much my life had changed through new experiences like marriage and fatherhood, I found myself wondering what Redd might be doing in his adult life. About a year later, I had the first (albeit rough) draft of Fields of Fire written. The big joke I like to tell is that Redd is the gift that keeps giving. He got me a week off school and a book deal! 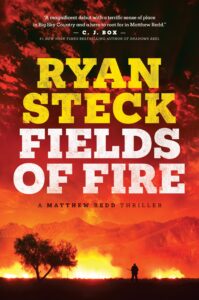 What are some of the themes that you wanted to explore in your new book Fields of Fire (Tyndale, September 2022)? Why were those specific themes important to you?

Redemption was a big one. I’m not someone who believes in throwing people away, so to speak. We’re all imperfect and need a little help sometimes, and I’m fascinated with how far some people can go in life when they put their mind to it. I also wanted to explore things like forgiveness, going back home, dealing with the loss of a loved one, and then obviously revenge.

Oh, man, this one’s tough. Kind of like the first question, this answer would definitely change depending on who you asked and when. Heck, on any given day my wife’s answer might change from “romantic lead” to “child in an adult’s body.” I’m half temped to say “all the above” for that very reason . . . but if I had to pick just one, I think I’d choose the mad scientist.

Mythical warrior sounds way cooler, don’t get me wrong, but when I think of a mad scientist, I think of someone building something from the ground up and dedicating themselves to that even when others don’t necessarily believe what they’re doing is possible. That’s how I felt when I was building up The Real Book Spy and writing Fields of Fire, among other things. So maybe that’s the best fit.

Thanks, Ryan! It’s nice to have you as a guest at Divine Detour.