Sarah Sundin: On Wings of Glory

Sarah Sundin didn’t intend to be a writer, but God had other plans.

Sarah remembers the exact day the calling came, and since that time she has pursued her mission with enthusiasm—learning the craft, researching meticulously, and giving God the glory for every inspiration. Her new book, A Memory Between Us, the second in her Wings of Glory series from Revell, releases in September.

How long have you been writing? Did you (or do you still) have other career aspirations?

I’ve been writing for ten years. I’m also a pharmacist—that was my first career aspiration. I majored in chemistry then went to pharmacy school, never thinking God would call me to be a writer. That was a bit of a surprise.

Was there a “light bulb” moment when you decided to turn writing into a career?

Mine was a true light bulb moment. On January 6, 2000, I had a dream with such intriguing characters that I felt compelled to write their story. Before that date, I’d never had an idea for a book, and after that, ideas flowed. It was as if God turned on a writing switch in my brain. I decided if I was going to dedicate time to writing, I needed to be serious and pursue publication. The novel that came from that dream will never be published, nor should it, but it got me started. I set out to learn the craft of writing from books, a critique group, and writers’ conferences.

Because of my strange start in writing, I’m well aware that He is my only inspiration. I know He could turn off the flow of ideas as easily as He turned it on. Faith also plays into my characters and plots. I see God at work in the world and in people all around me, and I can’t imagine not including that in my stories. My characters tend to be Christians who have areas where their faith needs to grow, like obedience, honesty, pride, trust, or fear. Then the characters learn through the story situations.

Writing has certainly been a positive detour. I was a pharmacist staying at home with three small children, and now I’m a published author…with three rather large children. I’m still trying to wrap my tiny brain around that.

Your first series, Wings of Glory, is set in World War II. Was there a special reason you decided to write stories set in that era? How did you go about researching the project?

World War II is such a fascinating time, full of dramatic stories and settings—a novelist’s dream. This was a time when ordinary men had to do extraordinary things, and when women first explored non-traditional roles—while remaining ladies. Plus, my great-uncle was a B-17 bomber pilot with the US Eighth Air Force during World War II, so I decided to make my three hero brothers B-17 pilots too.

I had to do lots of research for this series. As a reader, historical inaccuracies throw me out of the story, so I wanted my own novels to be as accurate as possible. I have to confess, I have over two hundred books and websites in my bibliography. Yes, that’s sick. Since the heroes are B-17 bomber pilots—but I’ve never flown a plane—I read a “How to Fly a Plane” book to get the basics, purchased copies of the actual B-17 pilot’s manual and the training film (pure gold!), and ran the flying scenes past a pilot friend. For A Memory Between Us, I also researched nursing during World War II, flight nursing, and Army hospitals. My favorite research involved visiting England.

Let’s talk about your new book, A Memory Between Us (Revell, September 2010), the second in your series. Please tell us about it.

In A Memory Between Us, Major Jack Novak has never failed to meet a challenge—until he meets army nurse Lieutenant Ruth Doherty. When Jack lands in the army hospital after a plane crash, he makes winning Ruth’s heart a top priority mission. But he has his work cut out for him. Not only is Ruth focused on her work in order to support her orphaned siblings back home, she carries a shameful secret that keeps her from giving her heart to any man. Can Jack break down her defenses? Or are they destined to go their separate ways?

A Memory Between Us is the second book in the Wings of Glory series, which follows the three Novak brothers, B-17 bomber pilots with the US Eighth Air Force stationed in England during World War II. Each book stands alone. 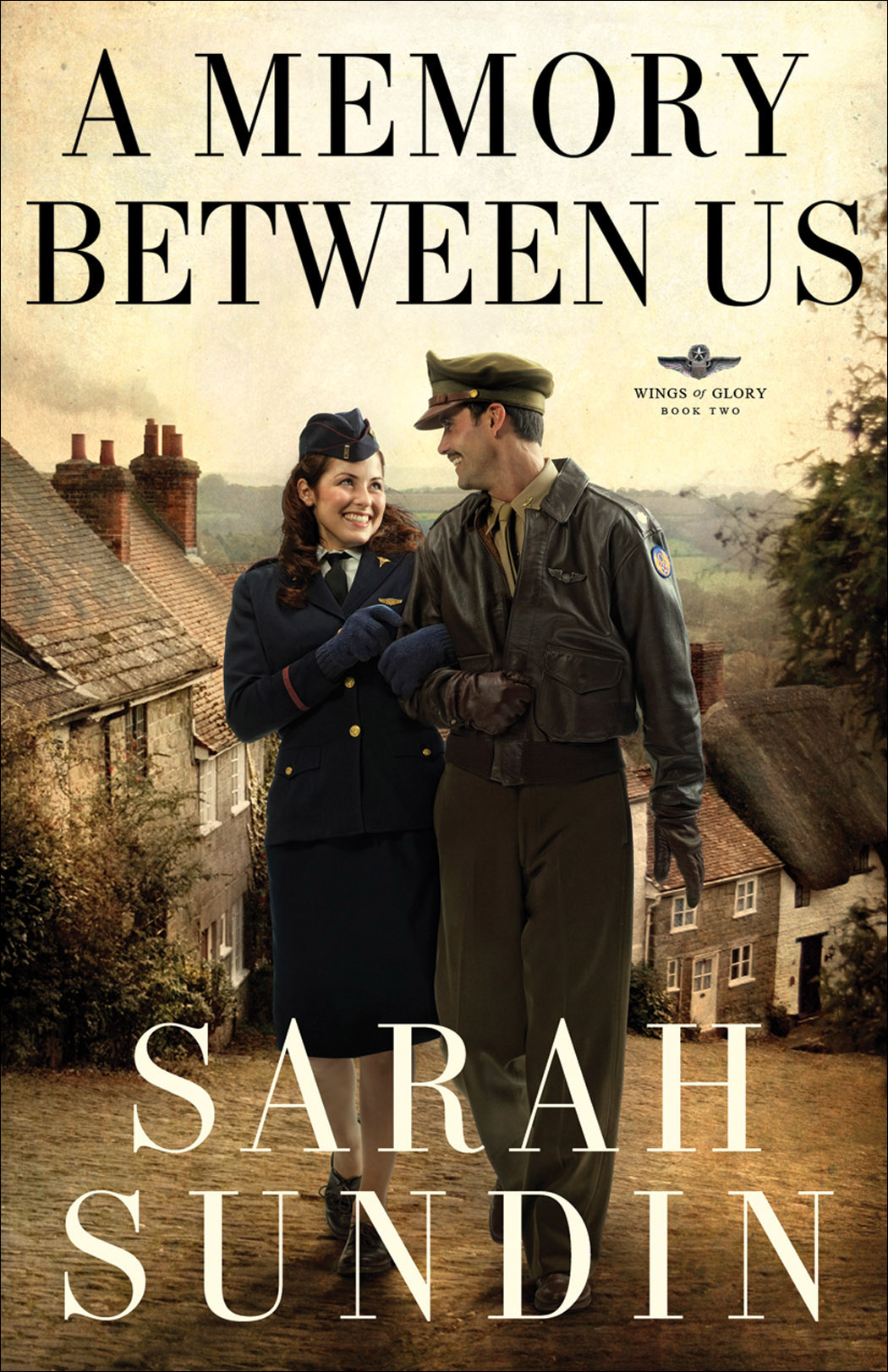 How do you discipline yourself to write every day? Do you have a writing routine? Where do you write?

I really love writing, so I have to discipline myself to lift my head and pay attention to the world around me. I have a routine—I do the bulk of my writing when the children are in school, then while they do homework, I do emails and other online work. I also use snippets of “wasted” time—I can take care of a lot of editing and e-mails during karate classes and in the dentist’s waiting room.

In the past, my writing space has been the living room couch, my husband’s computer in the den, and then my laptop on the dining room table. Just this past month we remodeled the den—I now have my own big L-shaped desk with lots of drawers and cupboards and a tackboard, and I have an extra bookcase just for my writing and research books. Everything I need—right there. Oh, it’s heavenly.

You are also a speaker. What advice do you give writers who are hoping to break into publishing?

Be teachable and soak up all the good instruction you can.

Join a local writers’ group or an online critique group.

Don’t submit to agents and editors until you’re ready. That means a complete manuscript, positive feedback from experienced writers, and enough knowledge of the publishing industry to know how to submit properly. You want your first impression to be stellar.

Lastly, when you’re ready, submit and keep submitting. Keep polishing your craft, and keep praying for the Lord’s guidance.

Chinese food and chocolate. But not together.

Do you have musical, as well as literary, talent?

No. I love music and read music, but any skill is purely technical. I played clarinet in high school, but not well. I love to sing…but I don’t sing well. A few years ago I played in a handbell choir, which was loads of fun—and I only had to play two or three notes!—but then I broke my wrist last summer, which put a tragic end to my ringing career.

In the car I listen to contemporary Christian music or to Big Band when the kids aren’t around to make fun of me. Big Band music inspires story ideas and gives me the color of the era, but when I write, I prefer silence. If I try to write to music, I end up singing—badly—and not writing.

It would probably be long and have too many words in it. It might start off whining and end up praising God. There would be all sorts of instruments because I have so many things going on in my life. I’ll throw in a trumpet solo because that would be cool.

Depends which day you ask me. I have mostly major chord days sprinkled with minor chord days. My family knows about those minor key days.

Oh, the little girl in high heels. I feel like I stumble around a lot, not knowing what I’m doing—or doing it not quite right. A while back I would have thought I was alone, but now I know a lot of people feel the same way. We can all stumble together.

We have a cute but skittish cat named Janie, and we have a yellow lab named Daisy. I’m convinced Daisy is Satan’s emissary to destroy my writing career. She wants to play constantly and doesn’t understand why mommy wants to write. And she eats my pens.

Thanks, Sarah! It’s a pleasure to have you as a guest at DivineDetour!

To purchase A Memory Between Us from Barnes & Noble, logon to http://search.barnesandnoble.com/A-Memory-Between-Us/Sarah-Sundin/e/9780800734220/?itm=1&USRI=a+memory+between+us.

To purchase A Memory Between Us from Christianbook.com, logon to http://www.christianbook.com/memory-between-us-wings-of-glory/sarah-sundin/9780800734220/pd/734222?item_code=WW&netp_id=762259&event=ESRCN&view=details.