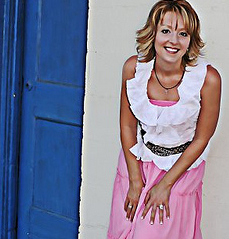 Shelly Wilson is a Christian/ Gospel/Country/Blues singer on a mission from God. And from all appearances, she has the energy and insight to get things done—quickly.

Shelly’s complete surrender to the Lord came during a dark time in her adult life. Then, after reading Bruce Wilkinson’s book The Dream Giver, she began to refocus on her childhood dream of singing.

In late 2008, Shelly released her album, Under the Shadow of Your Wings. In March 2010, she founded Drama Queen Magazine. And earlier this month, Drama Queen Ministries launched “Immeasurably More” Retreats for women.

How old were you when you first knew you wanted to sing? What did you do to pursue music?

I am not sure how old I was but I do remember always having a strange desire to sing on stage. When we went to concerts I wanted to be “up there.” I also was quite drawn every Saturday night to Barbara Mandrell’s show. I use to sing into a coke bottle in my room to her songs. : )

Many of them really. The first was when I was thirty, I had given birth to my little boy and about four months later I began having trouble that was unexplainable. Hard time breathing, could not focus on things, I felt like I was in a dream a lot. It began to get difficult to make decisions and I felt like I was losing reality. During that insanity I cried out to God to take me home because I could not take it anymore. None of the doctors could help me; they just wanted to give me more and more medications that simply made me worse. When I cried to the Lord, He came and I heard Him for the first time truly. I realized I had not had a personal relationship with Him…and after some time, surrendered my life and my dreams to Him. He told me He was giving me back my dream of singing…that I was to go use it for Him.

How did Drama Queen Ministries come about?

I had written a last minute song called Drama Queen right before I recorded my last album. The song is about not being lukewarm, how I want to weep at His feet and dance for Him. Lavishly love Him, you know? Not take for granted that He is worthy of extravagant praise as when Mary poured out the expensive perfume on Him and wiped His feet with her hair. I want to be like Mary.

It seems most if not all girls are Drama Queens in one way or another. We began an after school program here locally and fondly called it Drama Queens for the King with a desire to teach girls how to spin the Drama Queen mentality to something good for the Kingdom and Christ. Eventually we expanded nationally with a Drama Queen Magazine, Drama Queen Online Club, and a trademarked Drama Queen Bling merchandise line. The Lord directed us to trademark Drama Queen Ministries to hold all the outreaches we are now involved in. 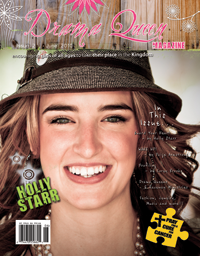 What inspired Drama Queen Magazine? What age group does the magazine target?

When the season for the local Drama Queen Club (DQK Club) was over, I was burdened of how to stay connected with girls if I was not going to be there physically. God ended up speaking about a magazine. Initially we thought it was for the TWEEN age group, and some folks still have that belief because it’s vibrant in color and fun! However, God has corrected us to show us it’s for “girls of all ages.” Even in my 40’s I need to hear a lot of the info God is sharing in this magazine. Girls 0-100 are all Drama Queens for the King…it is not limited to the youngsters. As long as we are breathing we are called to be bold warriors for Jesus. We must not stop while we are still here!

Your music is on the radio, you have a new accessories and clothing line, and there are several events coming up, including two-day women’s retreats. Please tell us about all of these.

We released two singles last year, It Smells Like Rain and Satan Get Behind Me. The Lord has a certain way with me. I do not play instruments or read music. But He began placing songs in my head at various times, and I would just write them down as He gave them to me. Some, He gave me in my prayer closet, others during trips, while cooking dinner, etc. It Smells like Rain took me about a year to understand why He wrote that song. He finally took me to the passage in Joel regarding the latter rain. I feel it is a prophetic song of things to come. 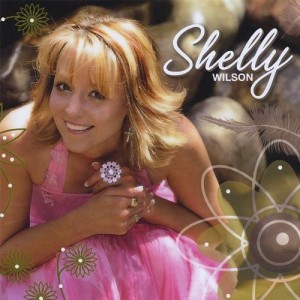 Satan Get Behind me was written in about five minutes after turning down an incredible offer for a great gig. There was something really bothering me about the gig and there was a lot of pressure for me to sing a certain way, certain songs, etc. When I turned it down God showed me it was a test…not every open door is from the Lord and we must always test the spirits as His Word says.

Our Drama Queen Bling line is really not just our own inspired products, but God has really called us to also highlight other products from other ministries. He seems to bring people to us like Greg McDougal, Christian country singer-songwriter and his family; Stephanie Miller, author of Collision with Destiny; other jewelry designers, etc., that are ministering every day but are truly unknown to the world at large. We feel God has called us to be a clearinghouse for them so that more girls and ladies can be blessed by their ministries and the beautiful products God has inspired them to create. We feel very strongly that there is a gap in the body coming together to help one another. We want to walk along side like-minded people and show them off too!!

We have live events for women and girls’ slumber parties through Drama Queen Ministries. Our women’s events are called “Immeasurably More,” referencing Ephesians 3:20 He will do immeasurably more than you could ever think or imagine, according to the power that works within us. We believe Believers are being called out of the comfortable life in the pew. God wants to do “new things” with us…things we have never thought of or imagined…like printing a magazine with absolutely no skill, knowledge, or industry connections to do so. He wants us to trust Him for the impossible. Our question is, “What is your immeasurably more? Are you living it?” 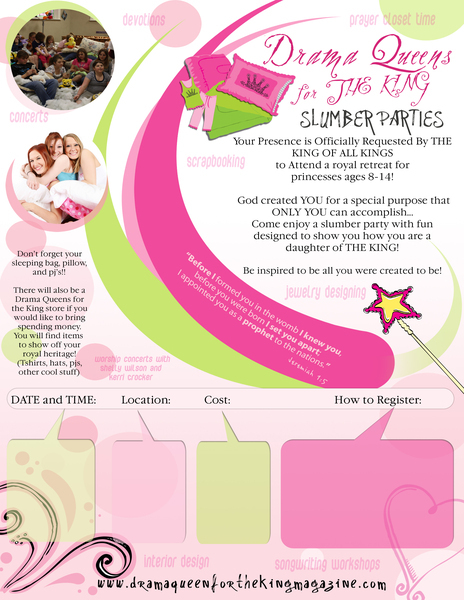 For the girls, we love slumber parties and love worshiping in concert with the girls, showing them their royal heritage with our crowning ceremony, and a lot of hands on activities to teach them the Word of God! The Lord told us to prepare an army of Drama Queens for the King…so we shall!

What’s coming up next for you?

A busy season of slumber parties it looks like. : ) But, also, we have developed what we call DQK Clubs. They will launch in the fall of this year. Mothers and daughters, sister friends, women’s groups, etc. will be able to start their own Drama Queen for the King Clubs (DQK Club) and impact their sphere of influence for Christ. The Drama Queen Magazine will be their companion tool with God’s Word, and we look to have them popping up across the country. We have a couple piloting right now. We believe this is God multiplying the message of Christ in a fun, unique way…but also a very fast way. Time is short and we must prepare people for His coming.

This website features writers as well as musicians. Have you ever considered writing a book about your journey?

That’s funny…yes, actually, I have been waiting for God to send a publisher. : )  He has asked me to compile all my blogs…which are called Moments with Jesus…into a book which has been started but not yet finished! I am waiting for Him to send the help. : )

Heaven Is for Real, Collision with Destiny, and Heaven Is Real.

A song about living out the REAL fairy tale…one where the princess found her King…where there really is a knight in shining armor, and one where she was set free from the chains that bound her.

That’s funny…hmmmm. Sometimes the strong, female lead…sometimes : ) (When God says so.) Other times the little girl trying to walk in high heels!!!! (This a lot of the times.)

We have one cat!!! Tink!! We love her. One day I opened up the laundry room door to go into the garage and she walked right in. We do not even know where she came from. She’s been with us ever since!

Thanks, Shelly! It’s so nice to have you as a guest at DivineDetour.

Thank you, precious…honor to share Jesus and what He has done in my life. Without Him I would still be lost.

For more information about Shelly, visit her website at http://www.shellywilson.com/. You can read more of her inspiring testimony at http://shellywilsonministries.com/?page_id=380.

To purchase Shelly’s music, logon to: