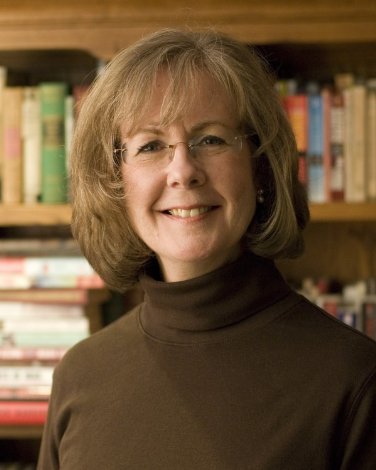 Stephanie Grace Whitson began writing seriously while home schooling her children. Walks the Fire, her first published novel, was released in 1995. Since then, her novels have appeared on the ECPA bestseller list numerous times and been finalists for the Christy Award, the Inspirational Reader’s Choice Award, and ForeWord Magazine’s Book of the Year. Her first nonfiction work, How to Help a Grieving Friend, was released in 2005.

A native of southern Illinois, Stephanie has lived in Nebraska since 1975. She and her husband have five children—two married, two in college, and a high school senior.

I’ve enjoyed writing for as long as I can remember. I always loved writing assignments in school. I’m something of a “caboose” in my family, and my older brothers and sisters used to delight in teaching me new words, so I think I was probably a “word person” before I even remember loving writing. I don’t journal, but I often think through a problem by thinking aloud on paper . . . and then pushing “delete.”

The first fiction I remember writing was a story about a woman rancher when I was in junior high school. I did that strictly for my own entertainment. Moving to Nebraska and home schooling four kids introduced me to real stories that fascinated me, and that led to my writing the story that became my first published novel, Walks the Fire.

Countless times. I was never going to get married. Never have children. Never home school. Never get married again after my first husband died. Sometimes I think the phrase “He who sits in the heavens laughs” applies very well to my life. I say “never” and God laughs and says, “wanna bet?”

I’ll just concentrate on two major areas of my writing life where faith plays a key role. First of all, there is that thing called “voice” which is unique to each writer. The fiction that I write will always be “Christian” by definition, because that is who I am. It isn’t a style I have adopted or a vocabulary I have learned or a formula I’ve acquired in order to sell my stories. That is probably the main difference between Christian fiction and all others. Christian fiction isn’t something I write as much as it is a reflection of who I am.

Second, my faith also provides the definition of “success” that drives me. I often remind myself that success in light of eternity has nothing to do with books sold. Success in light of eternity means obedience to the Audience of One. In a hundred million years it will not matter if I was published, if my name appeared on any best seller lists, if I received any writing awards. In a hundred million years, what will matter is my obedience to my Lord. If He says “well done,” then whatever happened here below was good, and I achieved success in the truest sense of that word.

Let’s talk about the re-release of your Dakota Moons Series (Livingstone Books, July 2012). Please tell us about them.

The three books in the Dakota Moons series are very close to my heart for so many reasons. First of all, because of the real people who inspired my fictional characters. The Dakota War of 1862 resulted in the largest public execution in the history of our nation. Sadly, some of the men who were hung on that dark day were actually heroes who had risked their lives during the war to protect their white brothers and sisters in Christ. When I read the accounts of the people involved, I wept. I knew I wanted to tell that story. 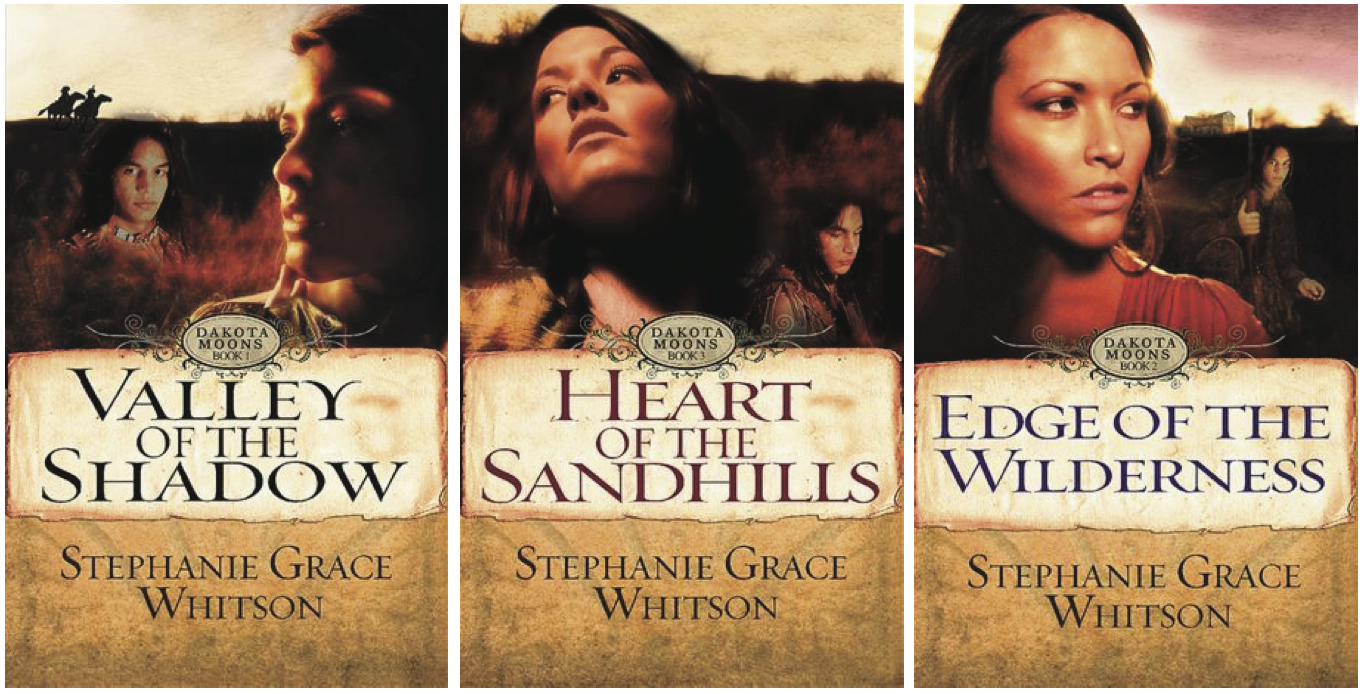 Another reason that those books are special to me is that two of them were Christy finalists. During that time in my personal life, I was going through a tough time of trial. Perhaps the biggest was my husband’s losing battle with cancer. Having people in the publishing industry select my books for consideration for a Christy was a wonderful grace note from the Father—a real encouragement.

Another reason that those books mean a lot to me is that their existence is proof of God’s enabling grace. I had to write a husband dying in one of those books. I still remember sitting at my desk writing that scene . . . and my own husband was resting in a bed nearby, in hospice care at home, dying of cancer. Even as I type those words right now, I wonder how on earth it was possible for me to write. And I return to the only answer that makes any sense at all: God’s amazing grace.

Do you have a favorite book in the series?

I really don’t. I love each book in that series for a different reason. I loved going on the journey with my characters and finding a happy ending for Gen and Daniel Two Stars.

God often uses our writing to teach us. What have you learned about life, faith, and/or even yourself recently while in the process of writing?

Most recently I’ve been learning the application of David’s words in the Old Testament to my writing. David said, “I will not offer to the Lord that which costs me nothing.” Those words are posted in my office, and they are a comfort to me when I have to say “no” to something I really want to do . . . something I would love to do . . .  but cannot do, because I need to write. Offering up my time and the way I would rather use it some days isn’t as hard when I lift it up to my Heavenly Father. He understands how much I really would like to spend more time volunteering at the quilt museum. He understands how I’d really rather play with this or that grandchild today. And He accepts my sacrifice of praise, because I don’t want to offer to the Lord writing which has cost me nothing. I haven’t learned that lesson completely yet, and I still struggle with time management, but I see God at work in my life, and I’m feeling less “false guilt” because of my need to work.

I have fairly simple joys when it comes to food. I love good coffee, and I enjoy trying different roasts and beans from around the world. Just the other day I bought a fair trade organic coffee grown in Honduras that made a really great cuppa. Oh—and if I’m really splurging I add real cream and raw sugar. I love to discover a new wine that can complement my favorite cheese in the world, Fromage d’Affinois. That usually means a pinot noir. I’m beginning to discover that “less is more” when it comes to comfort food, so I splurge on small portions of things I never used to let myself buy.

I was a voice major in college umpteen years ago, and I used to play piano quite well, but when I became a mother the time for practicing went by the wayside. Now I’m content to use my musical gift to be a listener. I love blues music—probably because it’s so much like the southern gospel I grew up on. But I have really eclectic tastes in music. At the moment my favorite musician is singer/songwriter Shannon Labrie. She’s an “up and coming” Nashville artist . . . who also happens to be my daughter. But all of my children are gifted musicians. One or the other of my kids is usually on the worship team at church on any given Sunday. That’s such a joy.

I’d be one of two Doug MacLeod songs, either That Old River or Brand New Eyes.

I’m all of them. I’m strong when I have to be. I was “earth mother girl next door” when my children were small and I was baking all our own bread, gardening and canning and making jelly, etc. And I love to be the mysterious woman behind dark glasses when I travel. Oh, wait . . . super heroine . . . probably not. I tend to be shy about taking risks and trying new things. And I’m never the little girl trying to walk in high heels. I used to teach school in high heels . . . and I grew up very quickly . . . always acted older than my age . . . still do in some ways.

I wasn’t allowed a pet when I was young, so I borrowed the neighbor’s shepherd mix named Shep. He was a great companion, because I could have all the fun and none of the work. We used to play hide and seek. Literally, the dog would wait for me to go hide and then come find me. Hilarious and great fun for a child who had no friends.

Since being married I’ve had four precious dogs. Sundance the Shetland Sheepdog was stolen. Micah, the Shetland Sheepdog lived a good long life with us. Then came Samson, the Dobermann Pinscher, and Tanner, the German Shepherd. We had cats when we lived in the country . . . but they were outdoor mousers. I’m a dog lover. Love my granddogs and have actually been thinking maybe it’s time for a dog again . . . well . . . I think that until it’s six a.m. and the alarm goes off and I think about having a puppy to housebreak and obedience train. Then I hesitate. I tend to love big dogs that require a lot of input to be good companions. So maybe owning a dog is another thing I have to sacrifice for now. We’ll see.

Thank you, Stephanie. It’s been fun having you as a guest at DivineDetour!

For more information about Stephanie, visit her website at www.stephaniewhitson.com.

To purchase books in the Dakota Moons Series, logon to: