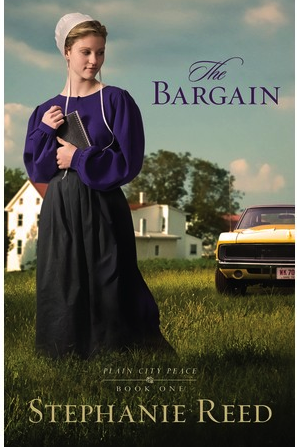 During her childhood, Stephanie Reed would pass through Ripley, Ohio with her family on their way to visit her grandparents. The signs she read there about the Rankin house prompted her to write about this historic home, which was an original stop on the Underground Railroad, in her first two published novels.

She and her husband, along with their two children, now reside on the outskirts of Plain City, Ohio, the site of a once-thriving Amish community. Stephanie still gleans ideas for her novels from signs glimpsed along the byways of Ohio. Her latest release is The Bargain.

What were the highlights on your path to publication?

The fact that I was published at all! I’ve met so many people who dream of having a book published, people who have college degrees and are far more qualified than I am. That my third book comes out this month is nothing short of Godly intervention, and that’s the highlight.

Paraphrasing Hebrews 11:6, “Without faith, it is impossible to be published (please Him).” You have to believe you can do it. Sure, there are many authors who believe in themselves or some other influence. I believe I can write through faith in the Lord Jesus; He is the reason I write.

Yes, and it was a painful detour. My first two books for Kregel, Across the Wide River and The Light Across the River, were about the Reverend John Rankin family and the Underground Railroad. I planned a third book to finish the series. Before I finished it, I wrote a chapter book for younger readers so they could enjoy the thrilling adventures of the Rankin family. Although there was some support for it, the book was rejected. I threw myself into the sequel to finish the Rankin saga and submitted a few chapters. This book was rejected as well, though not unanimously. I was urged by a very kind editor to self-publish these books because he felt they merited publication, but instead I asked him what Kregel wanted to see. He named a few genres, among them Amish. Long story short, that’s how The Bargain came to be.

Let’s talk about your new book, The Bargain (Kregel Publications, October 2013). Please tell us about it.

While The Bargain is a work of fiction, Betsie Troyer’s story is loosely based on that of a real-life Plain City, Ohio Amish woman who took over a harness shop after her nephew was drafted. I interviewed ‘Betsie’ in 2006, when only nine members of the once-large Plain City Amish population remained. My interest was piqued by her story. An Amish man, drafted? I used my memories of the Vietnam War and my growing up years in the 1970s to create what I call Amish historical fiction.

He taught me that the Amish, as different from the people of today’s world as they appear, are people like us. They aren’t perfect and neither are we. We all need the same Savior. About myself, He taught me re: editing that I’m not as easy to get along with as I thought.

I like popsicles. I used to love snow cones, but they’re hard to find nowadays. I suppose they remind me of being a kid. What’s better on a hot day than flavored ice on a stick?

I was in Varsity Chorus in high school, and I’ve sung at a wedding and at my pastor’s funeral. His wife told us he’d so enjoyed our quartet’s Sunday night performance (Heaven Came Down) that she wanted us to sing it at the memorial service on Thursday. I had to ask my boss for permission to leave my steakhouse job in order to make it to the church on time. I don’t think he believed that I was singing at a funeral. I still enjoy singing, but mostly in the car! As a side note, I did make up a soundtrack of early 70s songs for The Bargain, including Ohio by Crosby, Stills, Nash, and Young and The Show Must Go On by Three Dog Night.

If you asked my husband, he says I’m a sucker for a love-’em-and-leave-’em rock song. I say something bluegrass or American folk.

No pets now, although I do have a grandkitty. Growing up, I owned cats, but my favorite pet as a child was probably the pony I wanted to find (like in all the best horse books) and keep in my garage. It would have been great to saddle up and ride the wide open sidewalks of the Ohio suburbs. There’s a pony in The Bargain; now that I think about it, Fledge is probably a tribute to that never-realized dream. That’s like another folk song: “I’ll ride the sidewalks of the suburbs/Ford the rivers of time/On the pony I never had.” Note to self: start writing folk songs.

Thanks, Stephanie! It’s nice to have you as a guest at DivineDetour.

Thank you for having me, Kathy! These were fun questions to answer.

To purchase The Bargain, logon to: