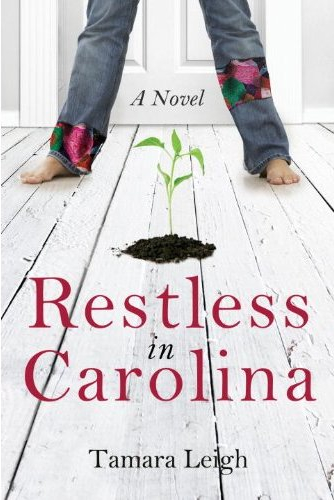 Restless in Carolina, the third book in Tamara Leigh’s Southern Discomfort series, releases today to the CBA market, continuing the tale of the endearingly eccentric Pickwick family. Click the cover to read an excerpt.

Tamara is the award-winning author of seven inspirational and seven general market books. An ACFW Book of the Year winner and a RITA finalist, she resides near Nashville, Tennessee with her husband and two sons.

Let’s talk about your new book, Restless in Carolina (Multnomah, July 19, 2011), #3 in your Southern Discomfort series. Please tell us about it.

So glad you asked, Kathy! In this final installment, it’s Bridget Pickwick Buchanan’s turn to leave her mark on the series. If you don’t mind, I’ll paste in the back cover copy since I doubt I can improve upon it.

She’s all about going green. Could he be her white knight—or will he make her see red?

Tree-huggin’, animal-lovin’ Bridget Pickwick-Buchanan is on a mission. Well, two. First she has to come to terms with being a widow at thirty-three. After all, it’s been four years and even her five-year-old niece and nephew think it’s time she shed her widow’s weeds. Second, she needs to find a buyer for her family’s estate—a Biltmore-inspired mansion surrounded by hundreds of acres of unspoiled forestland. With family obligations forcing the sale, Bridget is determined to find an eco-friendly developer to buy the land, someone who won’t turn it into single-family homes or a cheesy theme park.

Enter J. C. Dirk, a high-energy developer from Atlanta whose green property developments have earned him national acclaim. When he doesn’t return her calls, Bridget decides a personal visit is in order. Unfortunately, J. C. Dirk is neither amused nor interested when she interrupts his meeting—until she mentions her family name. In short order, he finds himself in North Carolina, and Bridget has her white knight—in more ways than one. But there are things Bridget doesn’t know about J. C., and it could mean the end of everything she’s worked for … and break her heart.

Restless in Carolina has an eye-catching cover. How much input did you have on the artwork?

After writing both series and standalone books, which do you find the most enjoyable to write? Which is the most difficult? Why?

Good question. Overall, I think I enjoyed writing the series over standalone books since I was able to “grow” the Pickwick family over the course of … well, the nearly three years it took to complete the series. In sitting down to write each book, it was satisfying to return time and again to characters and get to write (and know) each one more deeply. I especially liked Uncle Obadiah’s journey across the three books, even though much of it tied in to his poignant struggle against advancing dementia.

As for the level of difficulty, that distinction belongs to the series. Though the foundation was laid in the first book, Leaving Carolina, with each successive book there were more characters to keep straight. Then there were the “threads” across the stories that needed to be tied up neatly in order to achieve a satisfactory conclusion. Hopefully, I succeeded.

Though I care for the environment, I’m not a “tree hugger” like Bridget in Restless in Carolina. However, during my research for her character, I read several books—most of which were written for the Christian market—and was impacted by our God-given responsibility to care for the earth. Since then, I’ve consciously worked at further lessening my family’s impact on the environment. It takes time I didn’t think I had, but I feel closer to God in showing respect for His beautiful creation. See, even OUR creations can teach us something. : )

I recently read Anthem by Ayn Rand (free on my Kindle!) and was impressed by how powerful such a short and seemingly simple story can be.

Casting Crowns remains one of my favorite inspirational artists. As for a favorite song, that’s tough, but the first one that comes to mind is Put Your Arms Around Me by Texas (from the movie Ever After). No, it’s not current, but it stays with you …

Make a careful exploration of who you are and the work you have been given, and then sink yourself into that. Don’t be impressed with yourself. Don’t compare yourself with others. Each of you must take responsibility for doing the creative best you can with your own life. Galatians 6:4-5

I’m partial to the warming of spring and the cooling of fall due to the lack of extremes (have you been outside lately?!). I believe “lack of extremes” also describes my personality. Just call me a stick in the mud …

Are you a morning lark or a late-night owl?

It’s much easier for me to stay up late than to get up early, so let’s label me a late-night owl.

I understand you have added a new canine member to your household since your last visit here. Please tell us about him/her.

He walks on stilts, has a powerfully defined ribcage, a stub of a tail, sharply pointed ears, piercing eyes, a growl that makes a person do a quick count of their fingers, and a smile (really!) that says, “I love you SO much!” Can you name that canine? Nope, not a Bulldog. A Doberman. And are we ever happy to be well past the puppy stage.

Thanks, Tamara! I’m looking forward to reading Restless in Carolina!

Thank you, Kathy. You always ask such good—and unique—questions.

For more information about Tamara, visit her website at www.tamaraleigh.com.

To purchase Restless in Carolina logon to: