Tamera Alexander ~ To Win Her Favor 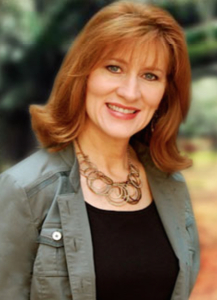 USA Today bestselling author Tamera Alexander has released ten award-winning novels, including A Beauty So Rare, which debuted at #7 on the CBA bestseller list last year, staying on the list for three months.

Tamera writes what some of her readers call historical “grit-lit,” a.k.a. Southern historical fiction/romance set in post-Civil War Nashville. She also writes Colorado Territory historicals set in the Rocky Mountains, where she lived for more than seventeen years.

Tamera now lives in Nashville, Tennessee with her husband, close to the antebellum mansions about which she writes. They have two grown children and a Silky Terrier.

I first considered writing a novel in 1997. But I need to go back a bit further to get the full story. In 1995, my mother-in-law, Claudette Harris Alexander, shared a book with me, one she thought I would really enjoy. I was busy and let time go by without reading it. She asked me again — several times — if I’d read it. I said no (because the cover didn’t really appeal to me), but being a good Southern gal I said that I would! The best laid plans, as they say.

Very unexpectedly, Claudette died that same year from a brain aneurysm at the young age of 58. Weeks passed, and as I was cleaning bookshelves downstairs, I happened across that little volume and immediately sat down and read it. Claudette was right. I felt an immediate connection with the thread of hope woven through that gentle love story — Love Comes Softly, by Janette Oke, originally published by Bethany House in 1979. That sent me searching for more inspirational fiction, which I devoured.

A handful of years later my husband and I were driving back to Colorado from Texas late one night. I finished a novel, turned to him and said (only joking at the time), “I think I could write one of these.” Without blinking, he said, “Well, do it.” Competitive at heart, I nodded and said, “Well, all right. I will!”

My first novel made it to the review board at Bethany House Publishers in 2001, after which I received a very nice rejection letter. I promptly stuck that manuscript in my desk drawer, but writing that first story was a learning experience for me. I determined then to set about seriously studying the craft of writing. Two years later, I wrote my next story, Rekindled, which became my first published novel.

Oh my, yes… One divine detour that comes to mind is what happened to that manuscript I’d stuck in my desk drawer. The one that had been collecting dust for seven years. My agent, Natasha Kern, called one day in 2008 and said Thomas Nelson wanted me to write the first historical for their Women of Faith series. Long story short, after a complete rewrite, that first manuscript became The Inheritance, which has sold over 100,000 copies since its release in 2009.

I still love that story and am thrilled it finally found its way to publication. That experience taught me a valuable lesson — every “No” along the way is really part of God’s final “Yes!” when His perfect timing is reached. 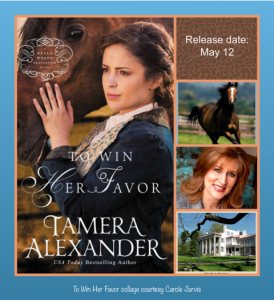 Let’s talk about To Win Her Favor (Zondervan, May 2015). Please tell us about it.

I’m excited about finally sharing To Win Her Favor with readers. For over a year, I’ve lived with these characters inside me, so it’s really gratifying — and a tad nerve wracking — when a book finally makes its way into readers’ hands and they have the opportunity to get to know these characters like I do. And hopefully grow to love them the same.

To Win Her Favor is the second standalone novel in the Belle Meade Plantation series. It follows the story of Maggie Linden and rugged Irishman Cullen McGrath. This marriage of convenience story explores questions of race, faith, and loyalty and offers perspective on how Reconstruction affected racial relations, social status and economic fortunes in the post-war South — and has a passionate love story at its very heart.

Maggie Linden lost nearly everything in the Civil War — including most of her family. She’s about to lose her stables and land at Linden Downs, and her racing hopes as well. A gifted rider in a world where ladies never race, Maggie is determined that her mare, Bourbon Belle, will become a champion. And her only hope of saving Linden Downs is if the horse takes the top purse in the inaugural Peyton Stakes, the richest race ever run in America. To give his daughter a chance, Maggie’s wily father makes a barter. But his agreement includes one tiny, troublesome detail: Maggie must marry a man she’s never met — a man she never would have chosen for herself.

It’s all right if readers haven’t read the first book in the series, To Whisper Her Name (USA Today bestseller). The Belle Meade novels can be read and enjoyed individually.

God often uses our writing to teach us something. What did you learn (about life, faith, and/or even yourself) in the process of writing this story?

I was reminded of just how much — and how far back — prejudice has influenced our lives and choices. Almost as long as man has drawn breath, we’ve held biases against one another. In the nineteenth century many Americans harbored animosity toward foreigners, and though I wanted to give an accurate historical perspective on the issue in To Win Her Favor (specifically about the Irish in Nashville), I didn’t want to only give a historical perspective on prejudice. Because as we all know, its insidious nature is alive and well.

It’s my prayer that as readers read this story they’ll take the same journey I did in exploring their own hearts even as they experience the stark realities of prejudice in Cullen and Maggie’s world, along with promising moments of hope. We have a long way to go in healing prejudicial wounds in this country, in this world, and that healing will only come through the powerful presence and name of Jesus Christ and in having a relationship with Him.

He can change hearts. He can move mountains.

Doughnuts. I don’t know what it is about those yeasty little balls of fried flour, sugar, and fat, but they’re so comforting. Which is especially mind boggling when they do absolutely nothing for you except momentarily soothe your soul. Then again, I guess that’s something. Although the gift they give to the hips is another thing altogether.

“Therefore, since we are surrounded by such a huge crowd of witnesses to the life of faith, let us strip off every weight that slows us down, especially the sin that so easily trips us up. And let us run with endurance the race God has set before us. We do this by keeping our eyes on Jesus, the champion who initiates and perfects our faith. Because of the joy awaiting him, he endured the cross, disregarding its shame. Now he is seated in the place of honor beside God’s throne. Think of all the hostility he endured from sinful people; then you won’t become weary and give up.”

Keeping our eyes on Jesus and running the unique race He’s set out before each of us, that’s our ultimate goal. Others may (and will) try to slow us down or trip us up, or discourage us along the way. But God’s words in Hebrews always draws me back to the most important thing—surrendering to Him, obeying Him, following Him. And remembering all He went through—for me, for you—gives me renewed strength.

Wow! What a question. I just turned and asked my husband (who happened to be walking by) and he responded, “Depends on the day…and your mood,” then kept walking. LOL. But I’d have to say that generally I’m the strong, female lead — who lives next door, sports sunglasses, flies on occasion, and who rarely leaves the house without wearing heels. On a serious note, my independent streak is something I constantly surrender to the Lord. He’s the Potter, I’m the clay. He’s the Potter, I’m the clay… 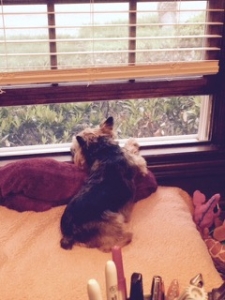 I’m a dog lover, too! Jack, my little writing buddy, is nine years old and is the sweetest. People often comment that he’s a “really big Yorkie.” But he’s actually a Silky. He’s a big dog in a little body, mellow and loving, and has an ottoman beneath a window in my office where he keeps watch on the world while I write.

Thanks, Tamera! It’s nice to have you as a guest at DivineDetour.

For more information about Tamera, visit her website or on Facebook and/or follow her on Twitter or Pinterest. Join her on the Belle Meade Plantation novels page to learn more about the setting of To Win Her Favor and to tour the grounds of this historic estate. She’s got a glass of sweet iced tea just waiting for you!

To purchase To Win Her Favor, log on to: