The Christmas Story—Through Word and Prayer 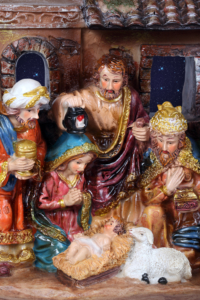 About this time Caesar Augustus, the Roman emperor, decreed that a census should be taken throughout the nation. (This census was taken when Quirinius was governor of Syria.) Everyone was required to return to his ancestral home for this registration. And because Joseph was a member of the royal line, he had to go to Bethlehem in Judea, King David’s ancient home—journeying there from the Galilean village of Nazareth. He took with him Mary, his fiancée, who was obviously pregnant by this time.

Oh, God, You Who control history, You Who guaranteed that the Messiah be born in Bethlehem, You Who journeyed with Joseph and Mary, we lift our lives to you, knowing that Your plan for us is perfect. We thank You that You journey with us, and even when the path is long and uncomfortable, we are assured that it has meaning in Your eyes.

And while they were there, the time came for her baby to be born; and she gave birth to her first child, a son. She wrapped him in a blanket and laid him in a manger, because there was no room for them in the village inn.

Heavenly Father, it is so hard for us to fully comprehend the Eternal Son of God taking on flesh, born of a woman. The greatest miracle in the world happened quietly in a stable in an obscure village of Judea. As Mary wrapped your Son in a blanket, may You wrap us in the blanket of your mercy and grace.

That night some shepherds were in the fields outside the village, guarding their flocks of sheep. Suddenly an angel appeared among them, and the landscape shone bright with the glory of the Lord. They were badly frightened, but the angel reassured them. “Don’t be afraid!” he said. “I bring you the most joyful news ever announced, and it is for everyone! The Savior—yes, the Messiah, the Lord—has been born tonight in Bethlehem! How will you recognize him? You will find a baby wrapped in a blanket, lying in a manger!”

Lord, what gifts you give to even the lowliest members of society! An angel bringing the message of the Savior’s birth to shepherds! Calming their fear to hear the Good News of our Savior’s birth! And You bring this message even to me. Thank You, Lord!

Suddenly, the angel was joined by a vast host of others—the armies of heaven—praising God: “Glory to God in the highest heaven,” they sang, “and peace on earth for all those pleasing him.” When this great army of angels had returned again to heaven, the shepherds said to each other, “Come on! Let’s go to Bethlehem! Let’s see this wonderful thing that has happened, which the Lord has told us about.”

And, Lord, the angels. The Armies of Heaven. Oh, to have heard them that night, singing and praising Your name. They saw the miracle and worshipped. And their worship inspired the shepherds to look for Jesus. May we hear Your song and look for Jesus too.

They ran to the village and found their way to Mary and Joseph. And there was the baby, lying in the manger. The shepherds told everyone what had happened and what the angel had said to them about this child. All who heard the shepherds’ story expressed astonishment, but Mary quietly treasured these things in her heart and often thought about them.

Lord, You promise that when we seek You, we will find You if we seek You with all our hearts. The shepherds found You and told everyone about You. I pray that we would listen to this story all over again, with open hearts, that we might not only treasure these things in our hearts but that we might tell all we meet that Christ the Lord was born today.

Then the shepherds went back again to their fields and flocks, praising God for the visit of the angels, and because they had seen the child, just as the angel had told them. [All Scripture from The Living Bible, Luke 2:1-20]

With praise and adoration, Lord, we come before You to celebrate the most joyful news ever announced. A Savior has been born; He is Christ the Lord! Amen. And AMEN.