The Cross. For You. For Me. 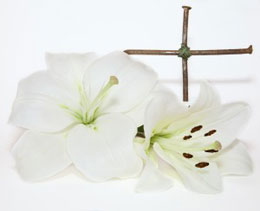 The temptation in the wilderness occurred at the beginning of Jesus’ ministry. Three different temptations. Yet the same purpose in each. To keep Jesus from the cross.

[Jesus] had fasted 40 days and 40 nights, He was hungry. Then the tempter approached Him and said, “If you are the Son of God, tell these stones to become bread.” But He answered, “It is written: ‘Man must not live on bread alone but on every word that comes from the mouth of God.’”
~ Matthew 4:1-4 HCSB

A choice lay before Jesus. Do what the devil was tempting Him to do. Use His miraculous powers to supply His daily needs upon demand. OR leave those needs in His Heavenly Father’s care.

Jesus chose to look to His Heavenly Father to provide. To keep His eyes on the cross. For you. For me.

Then the devil took Him to the holy city, had Him stand on the pinnacle of the temple, and said to Him, “If You are the Son of God, throw Yourself down. For it is written: ‘He will give His angels orders concerning you,’ and ‘they will support you with their hands so that you will not strike your foot against a stone.’” Jesus told him, “It is also written: ‘Do not test the Lord your God.’”  ~ vss. 5-7 HCSB

Another choice for the Son of God. Jump off the temple with a reckless display of His power, commanding His angels to save Him as the people cheered Him on. OR continue His journey to the cross where He would be mocked, scourged, beaten, and spit upon.

Jesus chose to look to the cross and endure the mocking, the scourging, the beating, the spitting upon. For you. For me.

Again, the devil took Him to a very high mountain and showed Him all the kingdoms of the world and their splendor. And he said to Him, “I will give You all these things if You will fall down and worship me.” Then Jesus told him, “Go away, Satan! For it is written: ‘Worship the Lord your God, and serve only Him.’” Then the devil left Him, and immediately angels came and began to serve Him. ~ vss. 8 – 11 HCSB

Last temptation. Last choice for Jesus, for now. Accept the offer to worship the devil and receive a crown of the world’s adoration along with a scepter of power over all nations. OR receive a crown of thorns and a reed for His scepter as He neared the end of His journey to the cross.

As we approach Palm Sunday and Holy Week, may we pause and think about Jesus’ journey to the cross. The temptations and suffering He endured. The death He died. The victory He won.