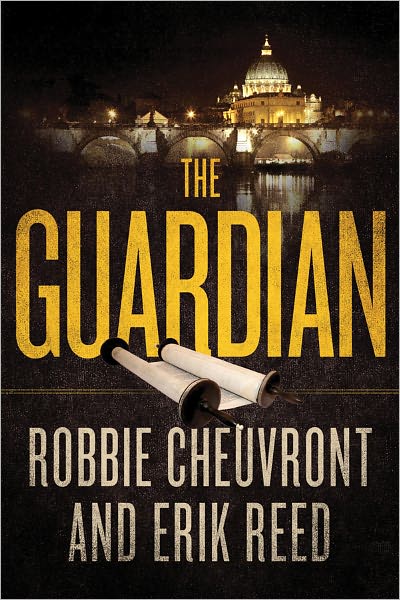 Erik Reed is a graduate of Western Kentucky University with a Bachelor of Religious Studies degree, a former U.S. Army paratrooper with the 82nd Airborne Division, and Lead Pastor of The Journey Church in Lebanon, Tennessee. He also attends Southern Seminary in Louisville, finishing up work on his Masters of Divinity.

Robbie Cheuvront is a former member of the country music band Lonestar and current Worship Pastor at The Journey Church. The Guardian (Barbour Books) is their first novel.

DivineDetour had the recent pleasure of interviewing Erik about the book.

You have a background in non-fiction. What initially sparked your desire to write?

I love to communicate the truths of God and His Word to people. I want to use the gifts God has given me to glorify Him. I have predominantly preached and taught as the mode for communicating God’s Word to others. However, I started to see that writing was a way of having lessons and truths in a more reproducible and accessible format. Instead of having to preach a message every year to make sure people remembered the truths from it or to introduce new people to it, handing them a pamphlet or sending them to a website page with the content on it became much easier. I am also an avid reader, so I see how effective of a tool writing can be to teach the gospel and its application to our lives.

C.S. Lewis is a great inspiration to me. He wrote both fiction and non-fiction. However, everything he wrote was aimed at teaching the gospel of Jesus, his Savior. I pray that I would always seek to make much of Him in my writing, not myself.

Let’s talk about your new novel, The Guardian (Barbour Books, September 1, 2011), written with Robbie Cheuvront. Please tell us about it.

The Guardian is a fast-paced, high-octane sort of book. From beginning to end it is a story that should keep readers on the edge of their seats and gasping for air. It begins with John, the disciple of Jesus, on the island of Patmos. We see that the scroll he receives in Revelation 10 has a distinct purpose. He is told that it will be passed down through his linage and his descendants will be responsible to solve a riddle that the scroll contains. We fast-forward to present day and we meet our lead character, Anna Riley. Anna is living it up at Mardi Gras when she encounters a young boy outside of a bar who knows things about her that he should not or could not know. He tells her that her grandfather, who she thought had been dead for years, is actually alive in a hospital in Pittsburgh. She is told that he must see her immediately because he is dying. Anna struggles with whether to believe this or dismiss it. This begins the adventurous journey of Anna learning about her linage, learning about her destiny to solve the scroll’s mystery, and learning about this thing called faith in the midst of all her doubt. Along the way she encounters danger, as people are trying to kill her as they seek to gain possession of the scroll. She also meets someone who is going to serve as her protector, teacher . . . and potential love interest, Jason Lang. :- )

What gave you the idea for the plot?

Back when we first started writing the book (in 2005), the Dan Brown DaVinci Code craze was still in full swing. The book has some influences from his style of story-telling. We were also influenced by movies like Indiana Jones and National Treasure. The idea of a suspenseful and fast-paced story was our core desire as we started writing the book.

While we hope the book is entertaining and a fun read, our core desire is that it would be used to teach important lessons about the faith.

Here are a few of those:

**The Sovereignty of God — we want our readers to understand that God is in control over the universe, even when the world seems to be in chaos. We want people to realize that God is bringing history to its appointed end. Every single event in history is leading it to its ultimate end. Nothing and nobody can thwart His plans. In the book we want to demonstrate how God works in the world to bring His plans to pass.

**The Necessity of Faith — walking by faith is the essence of the Christian faith. Most of us want God to show us His entire plan before we trust Him and follow after Him. But instead of giving us the next ten steps, God will usually only show us the next step we are to take, and He waits for us to take it before showing us the next one. That is the nature of faith. Walking by faith and not by sight. In this book we wanted to show this through our lead character, as well as several other characters.

**The Spiritual Nature of Life — life is more than what is seen by the eye. If we believe the Bible to be true (which Christians should), then we are told that life is more than flesh and blood; but their are unseen forces in the spiritual realm. In this book we wanted to give the reader a chance to see this so it would opens their eyes to this reality.

In the book, your lead character takes an unexpected path. Has God ever provided an unexpected “detour” in your life that turned out to be positive?

My family and I have been through some really hard times. My wife and I spent the first two years of our son’s life in the hospital with him. He has been through so much, and the majority of it was the result of a medical mistake made by a surgeon. This unexpected “detour” to our plans was hard to make sense of at the time. However, God is faithful. Through all of our trials and tribulations God was there with us and for us. Throughout our circumstances God has given us a chance to minister and help other people who are going through difficulties in their lives. God has used our tough times as a way for us to love and help others. He has brought incredible good out of incredible difficulty. Only God can do something like that!! 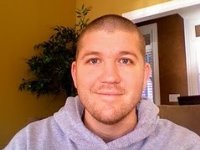 First, I could eat Mexican food every single day. If the words are flowing or clogged up like a sink, it doesn’t matter, give me some Mexican food. Second, if I can not have Mexican food or my wife refuses to go again for the fourth time that week, then pizza is my thing. The Pepperoni Lovers Cheese-Stuffed Crust from Pizza Hut is THE BEST! Just typing that, no joke, made my taste-buds water. Third, if I am not eating a full meal, and I’m just snacking instead, then Sour Skittles is my “comfort food” of choice. Give me all three in one day and I would declare myself ready for heaven. ;- )

I can play some chords on the guitar and play a few hymns on the piano. But you messed all that up when you clarified “talent” at the end of the question. So the answer would be:  I am a wannabe musician. My co-author Robbie Cheuvront is the real musician. He was on the road with the band Lonestar for ten years. He can play everything!

Wow! That is a hard one. I like all kinds of music. I love Frank Sinatra, Bob Marley, Chicago, Boston, Beach Boys, and many others. My favorite Christian musicians would probably be Hillsong United. My favorite song of theirs would probably be All I Need Is You. If I had to boil it down to the kind of song I would be, I would say All I Need Is You because, despite everything, He truly is the only thing in this life that I cannot be without. That defines my life.

My favorite Bible verse, the one I have clung to as a life-verse for me, is 1 Timothy 1:15-17. I feel like it sums up my life well. I am a sinner saved by grace. The mercy I have received was given so that I could spend my life to make much of Jesus. That’s all I desire to do.

15 The saying is trustworthy and deserving of full acceptance, that Christ Jesus came into the world to save sinners, of whom I am the foremost. 16 But I received mercy for this reason, that in me, as the foremost, Jesus Christ might display his perfect patience as an example to those who were to believe in him for eternal life. 17 To the King of ages, immortal, invisible, the only God, be honor and glory forever and ever. Amen.

I would have to say that I am more of the mythical warrior type. I was in the Army for four years as a paratrooper with the 82nd Airborne Division. As a follower of Christ, I have taken the commission of being in service to the King of kings and to fight for the heart of my King. Not to mention, I don’t want to be the creepy stranger. I’m not smart enough to be the scientist. And I don’t have any romantic ideas after going to the Mexican restaurant is shot down. haha

I do not have any pets because my wife is not a big pet fan. However, growing up I adored my two Cocker Spaniel dogs, Coach and Lady. We had them for eight-plus years during my childhood years. They would go with me through the woods behind my house and play with me in the yard. I really loved those dogs.

Thanks, Erik! It’s great to have you as a guest at DivineDetour!

For more information about The Guardian, logon to www.unlockthescroll.com.

To purchase The Guardian logon to: