The Welcome Wagon’s story is as unique as their retro-contemporary music. The duo, a married couple—the Reverend Thomas Vito Aiuto and his wife Monique—grew up in the same Midwestern town. She’s an artist by trade, having once worked as a craftmaker for Martha Stewart. He’s a Presbyterian minister and currently the senior pastor at Resurrection Presbyterian, a church he planted in Williamsburg, Brooklyn, New York.

Together they make music, a passion that grew almost spontaneously from informal sessions in their living room. Vito picked up the guitar out of the desire to sing hymns with family. Monique accompanies him on toy glockenspiel or harmonica. Neither read music, but many of their tunes are original.

Their second album for Asthmatic Kitty Records, Precious Remedies against Satan’s Devices, is a blend of sentiment and soul—and at it’s core plain and simple worship.

What’s the significance of the name ‘The Welcome Wagon’?

Monique came up with the name. She was reading about how in the pioneering days of the American West, towns would send out, “Welcome Wagons” to the trail, seeking to entice settlers to come to their town. They would bring out the best of what their town had to offer to welcome people in.

But I think our band, we simply want to be an agent of God’s grace. We want people to know that they are welcomed in by God.

When did you realize that you wanted to make music a part of your ministry? What/who most influenced your unique musical style?We never intended to make music part of our ministry, at least not officially. I mean, I guess it’s not even official right now, inasmuch as we don’t play music for our church.

But music has always been important to both of us, so when we got married, we realized we wanted it to be a big part of our family’s life. And we are Christians. So it all just sort of lives there together.

The person who has influenced us most musically is Sufjan Stevens. He produced our first record, and we have learned so much from him about music and songs and recording. But in addition to him, who influences us? I don’t know. I can tell you who we like. The Danielson Famile. The Band. The Consolers. Queen. Half-Handed Cloud. King’s College Choir. Johnny Cash. Christopher Miner. The Smiths. The White Stripes.

Have you ever experienced a “divine detour” in your life, your work, and/or your spiritual life and, if so, how did it affect you positively? 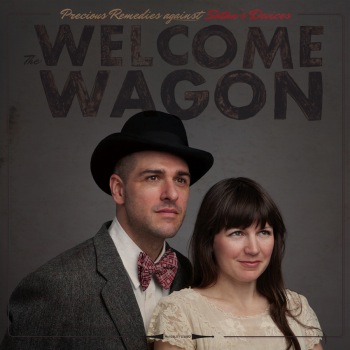 You recently completed your second full-length album, Precious Remedies against Satan’s Devices (Asthmatic Kitty Records, June 2012). Please tell us a bit about it.

Precious Remedies is meant to be just that, a remedy. We want God to use it to heal people. It has helped heal us, I think, of things like impatience and selfishness. It has helped us love each other and forgive each other. We have a long way to go, though.

How did you go about selecting the songs for the project? How many of the songs did you write or co-write?

I wrote or co-wrote nearly all of the songs. But we chose these songs and ordered them the way they did so they’d be shaped sort of like a narrative of the Christian life, or like a worship service. It sort of begins in crisis (the first song is called I’m Not Fine) and ends with redemption (one of the last songs is The Strife is O’er).

Your EP Purity of Heart Is to Will One Thing, now available on Noisetrade, was originally released to help raise money for Freeset, a fair-trade business in India to help “liberate and empower” women escaping the sex trade in Calcutta. What was the catalyst for the record?

They approached us and asked if we’d give them a song to sell. Well, we had three-four extra songs that didn’t fit on the record, so we decided to package them up and make an EP of it.

This website features both literary and music guests. What’s the name of the last GREAT book you read?

What Bible verse or passage most reflects your personal story?

Some favorite chapters in the Bible:

Thanks, Vito! It’s a pleasure to have you as a guest at DivineDetour.

For more information about The Welcome Wagon, visit their website at http://welcometothewelcomewagon.com/.

Checkout the group’s EP currently at Noisetrade at http://www.noisetrade.com/welcomewagon.

To order Precious Remedies against Satan’s Devices and other music by The Welcome Wagon, visit the Asthmatic Kitty website at http://www.asthmatickitty.com/musicians.php?artistID=22.