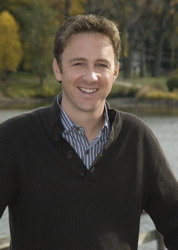 If Travis Thrasher has had a Divine Detour in his adult life, it wasn’t the epiphany to write, because writing is something he’s wanted to do since third grade.

Travis continued to pursue the dream through high school and college, and then took a job with Tyndale House Publishers as Author Relations Manager. Tyndale would eventually publish his first two novels.

He says of the thirteen years he spent working with authors, as opposed to just being one, that he learned a lot. That time also brought the revelation that he didn’t want to be “boxed in” by a brand or genre. Since then, he has made the deliberate choice to write spontaneously, rather than be concerned with what might be expected of him.

Subsequently, Travis’ novels have been compared to authors as diverse as Nicholas Sparks and Stephen King. His eighteen critically acclaimed releases vary from love stories to drama to suspense and even teen fiction. This fall, he collaborated with Nashville singer-songwriter Jimmy Wayne (well known for his 1700-mile walk to raise awareness for foster children in America.) The book, Paper Angels, was released in November.

Travis Thrasher lives in the suburbs of Chicago with his wife and three daughters.

What sparked your personal writing journey?

I’ve wanted to be a writer since third grade. My teacher encouraged me in my writing while also inspiring my imagination by reading C.S. Lewis’s The Chronicles of Narnia.

Hopefully it plays out in a natural way. That’s the tough thing about being a novelist in a genre considered “Christian fiction.” The older I’m becoming, the more comfortable I’m getting by that term. I don’t want every novel to be an attempt to witness/preach/pontificate/insert-your-own-term here. But I am a Christian and my worldview comes out. Hope to me—hope for today and hope after we die—can only be presented from that perspective. Yet my goal is still always to write a compelling story. 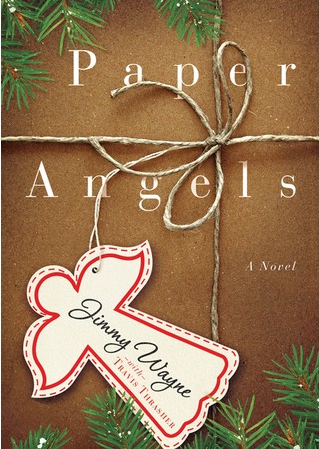 Let’s talk about your new novel Paper Angels (Howard Books, November 1, 2011) co-authored with Jimmy Wayne. The book has been described as ‘not just a Christmas story but an everyday story.’ Please tell us about it.

I understand the story began as a song. What method did you and Jimmy use to collaborate on the book long distance?

First off, Jimmy needed to make sure I was as crazy as he is. Once we got that squared away, we were good. He had actually started walking across the country to raise awareness for youth who grow too old for the foster care system and find themselves homeless. The publisher told me he was walking and I just thought, Who is this guy? The walk turned out not only to be an amazing story in itself, but one of the best ways to work together. He had a lot of time on his hands since he was . . . walking. All day. We’d talk about story ideas and characters and all of that. I got to understand Jimmy’s past and the core of the story he wanted to tell. So this went on for six months back and forth.

Yes. Over and over again. One of the first detours was getting expelled from Ben Lippen High School during my sophomore year. If I hadn’t gotten booted out, I would have stayed at that school for the remainder of my high school years. Instead, I moved with my parents up to Chicago where I still am.

God has shown time and time (and time) again that He can make good things out of the poor choices I’ve made. All of my books are reflections of this. God has had to bat me over the head with a two-by-four every now and then. But those hard lessons have resulted in some amazing things.

It’s really a toss up. I have two books in my teen series called The Solitary Tales releasing next year. I could be the next Stephanie Meyer. Or I could end up working at Arbys. Regardless, I love that horsey sauce.

Hopefully there will be more Jimmy Wayne collaborations as well. He’s got this whole other thing called a “record” that he’s working on. : ) Seriously though, we’ve got some more story ideas in mind. And I’d love to help him with his life story.

Chips and salsa. In good times and bad. On rainy days and sunny days. In winter or summer.

I feel I think and create as a musician. Honestly. My Uncle Chris was an exceptional musician and I feel I take a lot after him. I took a little piano but that’s it. But I do have an exceptional boombox/synth that I can create simply by making the sounds. I’m not joking either. My close friends have heard many of these sounds. I’m pretty good. But that’s an act for a circus, so I’ll keep to writing.

You’re trying to box me in, aren’t you? Look at Paper Angels—that’s a country song, right? Look at 40­—that’s alternative rock. Look at my teen series. That’s an 80’s synth-pop record. I don’t want to be defined by a simple song. I’d rather be a playlist full of all of these.

Minor chord. Without a doubt.

I’m all five. And at the end of the story, I realize that I’m a mental patient who’s delusional and thinks he’s five different people.

My wife and I have three daughters. So I need a strong, masculine dog. Right?  We have a female Shih Tzu named Hailey. But I love her since she was our first girl.

Thank you, Travis! It’s so nice to have you as a guest this holiday season at DivineDetour!

There is nothing I like more than talking about myself. Oh, wait. Thank you for featuring me! Happy holidays and Merry Christmas.

For more information about Jimmy Wayne, logon to http://www.myspace.com/jimmywaynemusic.

To purchase Paper Angels logon to: